Retaining a Class A surface, the newest core product was produced via electricity from renewable energy sources. With several notable achievements, ThermHex is also looking for distributors.
#sustainability

ThermHex Waben GmbH (Halle, Germany), producer of high-quality honeycomb cores for economic sandwich panels and parts, reported on Nov. 11 that it is launching a new honeycomb core, is celebrating its 10-year anniversary and has made the decision to switch to renewable energy.

The latest polypropylene core has a height of 20 millimeters and a cell size of 5 millimeters. This replaces a larger cell size, reducing it by almost half. Such a small cell size, says ThermHex, leads to better surface quality and enables more versatile application use, such as visible interior and exterior surfaces in automotive (the core achieves Class A surface quality, in these instances).

This year, ThermHex is also celebrating its 10th anniversary. For most of those years, it says it delivered around 7% growth per year. During the past ten years, the company notes that it has gone from strength to strength, increasing its number of employees five-fold, and increased sales by 15% in the past financial year, despite the economic downturn due to COVID-19.

With these achievements, ThermHex would also like to enlarge its network around the globe and is looking for more distributors, especially in Europe and the U.S. The company says it now aims for carbon-neutral production of its cores by the end of quarter one in 2021 and has started the transition this year by switching electricity suppliers to a renewable source.

“We are pleased with what the company has achieved over the past decade and are excited about the future,” says Dr. Jochen Pflug, CEO of ThermHex. “Our work is always evolving as we support our customers to better meet the requirements of weight reduction and a more efficient usage of natural resources. Through weight reduction in structural parts, we can help to reduce the environmental impact and contribute to sustainability.” 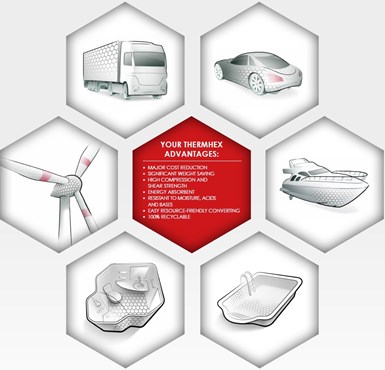 Now, reducing the environmental impact during the production of honeycomb cores and offering a lightweight but stiff core material at competitive prices is central to ThermHex’s design and production process. According to the company, all honeycomb cores are recyclable, and are resistant to moisture, acids and bases. ThermHex is currently working towards a CO2-neutral product.

Since July this year, ThermHex reports that it has been using green power for the production of its honeycomb cores. The production is based on electricity from renewable sources. The processing and monitoring of the green power supply is certified according to TÜV SÜD CMS Standard 92. This guarantees a reliable and traceable procurement, balancing and delivery of electrical energy from renewable sources.