Honeycomb cores are not new to the composites industry, but they are relatively new to the automotive composites market, where composite materials are only just starting to migrate into parts and structures for high-volume vehicles.

Recognizing this, ThermHex Waben GmbH (Halle, Germany) has developed a polypropylene honeycomb core material for composite sandwich structures in automotive panels. The standard volume weight of this core is 80 kilograms per cubic meter. Also available, for applications that require less compressive strength, is a core with a density of 60 kilograms per cubic meter. Core thickness ranges from 3 to 28 millimeters, with cell sizes of 3 to 9.6 millimeters. The ThermHex honeycombs have a half-opened surface that, in combination with various surface finishes, enables what is said to be an optimal connection between core and skin layer in the subsequent sandwich element. Small cells also enable an almost perfect surface finish. 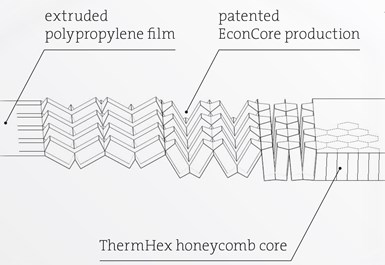 ThermHex produces its honeycomb cores by extrusion of thermoplastic polymers into a film, rotational vacuum-forming, a folding process and in-line lamination of the surface finish to allow a better bonding of skin layers. This patented, continuous, inline process, in which various skin layers can be applied to the honeycomb core, produces panels that ThermHex customers turn into finished components by applying the appropriate skin layer and forming and cutting them to size. By contrast, ThermHex says, other processes require each layer of honeycomb to be individually cut from a block and then laminated. 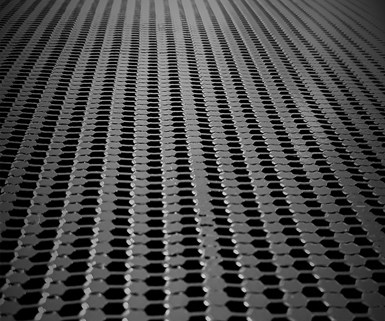 Since 2017, DPA Moldados has used the black version of the ThermHex polypropylene honeycomb core, replacing core materials of other producers. The honeycombs are used by DPA Moldados to fabricate, for example, the trunk floor in the Hyundai Creta ix25.

In this application, glass fiber mats are preheated, stacked on the top and bottom side of the ThermHex honeycomb core and then press-molded with a polypropylene resin matrix (granules) into a sandwich structure. According to DPA Moldados, the company is one of the few manufacturers in the world that is technically capable of producing this type of sandwich molded part for mass production. Furthermore, the materials used are 100% recyclable and require less energy to produce than competitive materials.

In addition to the production of automotive components, ThermHex says its honeycomb cores can be found in truck box bodies, marine interiors, swimming pools and furniture. The ThermHex production process is offered worldwide under license by mother company EconCore (Leuven, Belgium) and is used, for example, by Renolit under the name Gorcell for the trunk floors of the Maserati Gihbli and the Jaguar F-Type. In Japan, the technology is marketed by Gifu Plastics under the name Teccell and used there to fabricate the trunk lid of the Toyota Prius.