Appears in Print as: 'Automated sealing for aircraft components'

Supplier and distributor of automated systems for aircraft construction, Broetje Automation (Rastede, Germany) presents its automated solution for sealing aircraft components. Meant to replace the time-consuming process of manually sealing edges of aircraft parts, the company claims the product’s modular system will enable faster production by carrying out sealing applications safely and cleanly, and with high precision and effectiveness, even on complex components. Broetje-Automation claims the concept saves up to 20% in overall efficiency, while improving the quality of the components simultaneously. 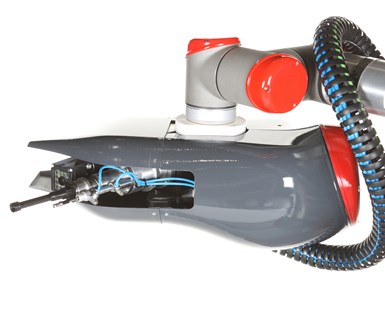 Broetje-Automation gave the sealer a modular structure to meet the complexity of aircraft components, including processing components at precise locations to avoid contamination; cleanly sealing hard-to-access, curved surfaces and joints; and mixing difficult-to-process sealants for the aircraft components themselves.  Depending on the application, the system can be operated autonomously within a robotic cell or with small, collaborative robots ("CoBots"). The system also provides a "digital twin," which is integrated into the automated NC programming environment "SOUL OLPS" and can fully simulate the processes. The system, the company states, is thus optimally prepared for use in future digital factories.

Further, to meet global customer requirements, the technology team at Broetje-Automation has developed various end-effectors for the application of the material. The system can use polysulfite and epoxy
sealants, both using pre-mixed cartridges and with a "mixing-on-the-fly" module that can mix several components live during sealing.