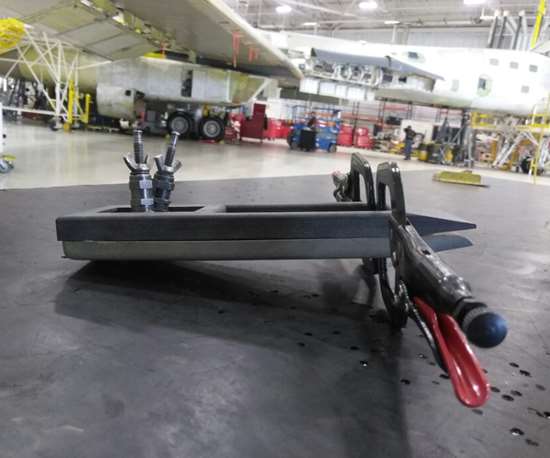 The Utah Advanced Materials & Manufacturing Initiative (UAMMI; Kaysville, Utah, U.S.) announced that it has successfully created and fit-checked its first carbon fiber 3D-printed part for the United States Air Force. The part, a first aid kit restraint strap for the B-1 aircraft at Tinker Air Force Base in Oklahoma, was made using a printer from project partner Impossible Objects (Northbrook, Ill., U.S.).

A year ago, UAMMI was awarded federal funds to create additively manufactured, carbon fiber composite parts for the U.S. Air Force. The goal was to replace broken parts on older legacy aircraft. Over the last year, UAMMI has been working with the Air Force to identify non-critical parts that can be replaced using additive manufacturing technology, including a restraint strap for a first aid kit in the B-1 aircraft. In many of these aircraft, the Air Force has experienced failures with original restraint straps, which risks the dislodging of first aid kits during flight. As original replacement straps are no longer manufactured, there is significant costs and wait time produce new parts through traditional means.

Using Impossible Objects’ Composite-Based Additive Manufacturing (CBAM) technology, UAMMI has produced a replacement part using carbon fiber and thermoplastic materials. The part was fit-checked on an operational B-1 aircraft at the Tinker Air Force Base last month. The installation of the part included adding new rivet holes, inserting a buckle in the strap cavity and fastening the strap to the cockpit wall panel.

Next steps for this part include a Fire, Smoke and Toxicity test at the National Institute for Aviation Research at Wichita State University (NIAR; Wichita, Kan., U.S.), followed by a USAF approval process before installation into the operational B-1 fleet.

The additive manufacturing project is being funded through the Air Force Research Laboratory under an America Makes program called the Maturation of Advanced Manufacturing for Low Cost Sustainment (MAMLS). Through MAMLS, the Air Force intends to demonstrate that additive manufacturing can be used to replace non-critical parts on-demand. Of particular interest are instrumentation knobs, wiring harnesses, small brackets, electrical connectors and similar items.

“Additive manufacturing represents a huge opportunity for Utah’s advanced manufacturing industry,” says Jeff Edwards, UAMMI executive director. “The composite additive parts that we are creating for the Air Force will significantly reduce both the time and cost of aircraft repairs. There is a long list of parts we plan to test and this project will help position Utah as the technology leader and innovator in this new field.”