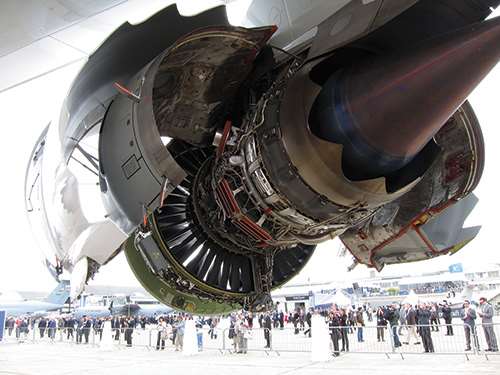 The turbofan jet engines used on commercial airliners are making composites industry headlines in the mid-2010s as engine designers incorpoate com pistes into a number of components on these assize power plants. Fully exposed in this shot, the nacelle components surrounding the General Electric GEnx turbofan engine provide a wide range of opportunities for advanced composites. Source: Olivier Cleynen

The Scorpion jet demonstrator, shown here during assembly, was conceived by an independent and is being built by a group of aerospace veterans committed to the idea that composite construction of warplanes can be done cost-effectively. The tactical jet prototype has garnered interest at its appearances in Europe, including the 2014 Farnborough Air Show. Source: Textron Airland

A new trend in aerospace composites fabrication is the use of dry-fiber layup, infusion and oven-cure, rather than autoclaved prepreg) for fabrication of flight-critical structures. Here, a technician inspects a starboard wing built for Bombardier’s (Montreal, Quebec, Canada) CSeries regional jets, during final assembly operations in the airframer’s wing factory in Belfast, Northern Ireland. The CSeries wings are the first on a commercial aircraft with skins formed from dry carbon fiber rather than prepreg. Wingskin layups are infused via Bombardier’s proprietary Resin Transfer Infusion process. Source: Bombardier, Belfast

In 2014, Space Exploration Technologies Corp. (SpaceX, Hawthorne, CA, US) was awarded US$2.6 billion to develop its Crew Dragon spacecraft. The pressurized spacecraft, developed employs a flexible cargo and crew configuration, and is able to accommodate up to seven crew members per flight. Source: SpaceX

Although the composite interiors market is fairly mature in commercial aircraft manufacturing — glass fiber and carbon fiber composites have been used to lightweight interior components for more than three decades — market analyst Chris Red (Composites Forecasts and Consulting LLC, Mesa, AZ, US) claims there is plenty of room for improving weight, durability, aesthetics and functionality, because composites currently represent only 20-25% of total interior weight, and that could increase to 30-40% within the next 10 years. Red adds that emerging interiors applications could drive annual production volumes up an additional 60% by 2023. Source: DuPont Protection Technologies

Unmanned aerial vehicles are a hot and growing market for composites. One of many examples of compsotes-enabled UAV technology is Dzyne Technologies's (Reston, VA, US), ROTORwing, a vertical take-off-and-landing (VTOL) capable, pilotless aircraft. Sporting a 3m wingspan, ROTORwing will need no runway, catapult and/or nets for launch and recovery. (Read more about the aircraft and the composites technology used to enable its VTOL functions by clicking "All-composite ROTORwing prototype UAV," under "Editor's Picks," at top right.)

Aviation flew high even when most of the world economy crawled. World air travel has grown 5% per year since 1980, in spite of 9/11 and other challenges.

Commercial aircraft stayed in the spotlight. Airbus (Toulouse, France) predicted in its Global Market Forecast for 2014-2033 “Flying on Demand” that air traffic will grow in value to nearly US$4.6 trillion, up from its 2013 estimate of US$4.4 trillion. Total commercial aircraft deliveries by 2033 will number 31,358 — 30,555 of them for passenger service and the remainder, freighters. During the next 20 years, passenger aircraft deliveries will break down as follows: 22,071 single-aisle, 7,786 twin-aisle, and 1,501 in the “jumbo” class. Airbus says passenger traffic is outperforming the world’s gross domestic product (GDP) in terms of growth by 5.6% and that both will go up, powered by emerging economies, which will increase the size of the world’s “middle class” from 33% of the total population in 2014 to 63% in 2033. Air traffic will double within 15 years.

The Boeing Co. (Chicago, IL, US), in its Current Market Outlook 2014-2033, paints an even more optimistic picture: The air traffic market will be valued at US$5.2 trillion, and 36,777 commercial aircraft will be required to meet demand in the next 20 years. About 15,500 of them (42% of all new deliveries) will replace older, less-efficient aircraft. The remaining 21,270 will increase fleet size. Single-aisles will continue to dominate. About 25,680 new ones will be needed over the coming two decades, driven by demand from low-cost carriers and the need to replace aging models. The twin-aisle fleet will require 8,600 new planes. During that period, the world’s GDP will be up by 3.2% on average, per year; the number of airline passengers will rise 4.2% per annum; and airline traffic will be up an average of 5%, yearly.

Growth in the use of composite materials in regional commercial airframes steadily increased in recent years, largely in response to airlines’ concern about the ever-increasing cost of fuel. Chris Red, president of Composites Forecasts and Consulting LLC (Mesa, AZ, US), estimated that a mere 0.45 kg of weight savings reduces annual fuel expenses (at $3/gal) by US$185 to US$360 per year for a regional turboprop and US$175 to US$432 per year for jets, dependent on aircraft size and annual flight hours. He estimated that one less kilogram of weight on a single-aisle aircraft could save from US$330 to US$990 per year, per aircraft. Some of the savings will be earned by increased use of composites in passenger cabins. Although the composite interiors market is fairly mature — glass and carbon fiber composites have been used to reduce the weight of interior components for more than three decades — Red claimed there is “still plenty of room for improving weight, durability, aesthetics and functionality.” Composites currently represent only 20-25% of total interior weight, but could increase to 30-40% in 10 years. Emerging interiors applications, says Red, could drive annual production volumes up an additional 60% by 2023.

Red noted a general trend toward more use of carbon fiber-reinforced polymer (CFRP) and the addition of thermoplastic composites, and he said it is reasonable to expect reclaimed carbon fibers from airframe production to flow into the interiors market at increasing volumes over the next decade.

Currently, two OEMs dominate the regional commercial aircraft market, Bombardier (Montrèal, Quebec, Canada) and Empresa Brasileira de Aeronautica S.A. (Embraer, São José Dos Campos, Brazil). On the strength of that success, each is, in fact, rapidly moving on to produce larger aircraft. But they are no longer alone in regional air space. The following OEMs are vying for market share: ATR, an Alenia Aermacchi SpA (Venegono Superiore, Italy) and Airbus Group joint venture, based in Toulouse, is rapidly gaining market share in the 50- to 70-seat range with its regional turboprops. In Japan, Mitsubishi Aircraft Corp. (Nagoya) is winging into regional air with that country’s first commercial passenger jet (10% composites, by weight), the Mitsubishi Regional Jet. And Superjet International, a regional jet startup with ambitious plans, is a joint venture of Alenia Aeronautica (Rome, Italy) and Sukhoi Holding Co., a Moscow, Russia-based civilian and military aviation company that emerged from the collapse of the U.S.S.R. Superjet produced 25 of its 98-seat SSJ100 aircraft in 2013; 26 were in service by April 2014.

Composite material suppliers are ramping up to provide materials. Nick Stanage, president of Hexcel(Stamford, CT, US), said his company, for example, anticipates revenues of US$2.5 billion by 2017, pointing to backlogs of 10,000 units, combined, between customers Boeing and Airbus as evidence of good long-term demand for its fiber and prepreg. And Cytec Industries’ (Woodland Park, NJ, US) Ammar Alsalih, program manager, Aerospace Materials, noted that backlogs at aerospace primes are motivating calls for materials that can process faster and reduce part cost. In response, Cytec introduced its PRISM TX1100 Dry Tape system for automated fiber placement (AFP). Developed specifically for Moscow, Russia-based Aerocomposit’s MS-21 single-aisle passenger jet, on which resin infusion will be used for the aircraft’s wing and wingbox structures, TX1100 is designed for use on AFP machines.

Private space transport also was in the news: Space Exploration Technologies Corp. (SpaceX, Hawthorne, CA, US) had taken center stage in 2012, when its Dragon unmanned space vehicle was docked at the International Space Station (ISS). It delivered 8400 kg of supplies to the orbiting laboratory and returned with a total of 759 kg of cargo to Earth splashdown — a key milestone in the new era of commercial spaceflight. This delivery flight was SpaceX’s first of 12 contracted resupply missions (through 2016) under NASA’s Commercial Resupply Services contract, worth US$1.6 billion. In 2014, however, attention turned to manned space craft: After months of speculation, NASA finally announced the recipients of its Commercial Crew Transportation Capability (CCtCap) grant money, designed to fund development of space vehicles to transport U.S. astronauts to and from the ISS. NASA reported on Sept. 16 that it had selected The Boeing Co. (Houston, TX, US) and SpaceX to develop spacecraft that could transport U.S. crews to and from the ISS. Boeing was the big winner, awarded US$4.2 billion to develop its CST-100 spacecraft. SpaceX was awarded a smaller amount, US$2.6 billion, to develop its Crew Dragon spacecraft. Sierra Nevada Corp. (Sparks, NV, US) and its Space Shuttle-like crew ship, the Dream Chaser, was eliminated. Sierra Nevada, however, said it intends to follow thorough with development, using private funds. Read more about SpaceX and other private spce developers in "The Private Space Race,"under "Editor's Picks," at top right.

Elsewhere on the private space front, Virgin Galactic (Las Cruces, NM, US) touted LauncherOne, its proposed aircraft-launched rocket, specifically designed to deliver small satellites into orbit. With substantial funding already in hand and commercial flights expected to begin by 2016, Virgin Galactic said it aimed to offer launches at the world’s lowest prices. Four private companies reportedly put down deposits for a total of several dozen launches. In January 2014, the company reported the successful completion of a third rocket-powered supersonic flight of its all-composite airframed, reusable passenger space vehicle, SpaceShipTwo (SS2). During the flight, SS2’s rocket motor was ignited, powering the spaceship to a planned altitude of 21,641m and a maximum speed of Mach 1.4. SS2’s unique feather re-entry system was also tested during the flight. However, the company’s space tourism aspirations — and private space-travel development in general, suffered a sobering blow in late October when that feathering system, during another test fight, transitioned from a locked to an unlocked position and deployed prematurely. The U.S. National Transportation Safety Board (NTSB) reported on Nov. 3 that the feather system was prematurely unlocked at or near Mach 1.0 on SpaceShipTwo and that the incident was immediately followed by the craft’s disintegration and crash, killing the copilot and critically injuring the pilot. Pilot error was under investigation.