Cutting the cost and time of tooling for composites 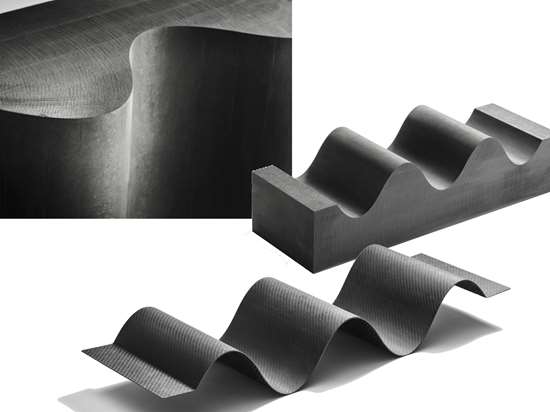 CFP Composites (Solihull, UK) is a disruptor in the composites industry. Managing director Simon Price led the team that developed a pyrolysis process to recycle carbon fiber, which was then sold to ELG in 2011. He then formed Carbon Fibre Preforms, now CFP Composites, which patented a very fast process for mixing chopped carbon fiber with resin and  forming lightweight preforms and parts with zero waste. The company’s FR.10 material is made using this process. It can withstand 1500°C for 7 hours and is stable at 3000°C. It is reportedly the first carbon fiber reinforced polymer (CFRP) material to pass the ISO 9705/E 603 room corner test for marine and offshore applications, withstanding 20 minutes of flame at temperatures > 1200°C without any further intumescent or fire-retardant additives or coatings.

After years of development, CFP Composites has modified this technology to produce a new tooling material for composites production:  360. “Its name relates to the degrees of fiber orientation in the matrix,” says Price, “because it is isotropic.”

For years, Price and his team at CFP have seen a gap in the tooling market. He explains that many companies buy raw materials, such as tooling board and foam, and then fashion production tooling themselves, machining master models first and then using those masters to laminate tools out of prepreg which are then machined to achieve the final high-tolerance surfaces. “This requires significant time and labor,” he notes. “In motorsports, which is extremely time-sensitive, it presents an obstacle for new development and innovation in structures. We then saw a similar problem in the aerospace industry, where manufacturers are buying Invar and waiting months to have it machined into tooling.”

Price and his team originally thought that composites manufacturers in these markets needed tools capable of >300°C. “So, we began development using the resin system from our FR.10 product,” he explains. “But this resin only works well at 500°C and above. However, we then understood that most companies were using tooling at 180-200°C. So, we switched to an off-the-shelf PA66 resin system.” This allowed CFP to offer its 360 product at a more economically viable price point. “It works at the full temperature profile needed but also lets us make it very quickly and deliver volume product within 7 days,” says Price. “We’ve already had a lot of response from the aerospace industry as a replacement for Invar tooling, which takes 9-12 months for tooling to be machined. Also, 360 is relatively lightweight — not a heavy, cumbersome Invar tool. Thus, tool handling is easier.”

Comparison to other materials

CFP 360 is made from chopped 24K Toray T700 carbon fiber blended with PA66 resin, so it has the same negative CTE as conventional CFRP tooling. Price explains that the ROCCS process also produces a fully isotropic composite with better consolidation and distribution of fibers in the matrix compared to conventional CFRP.

“A lot of people at the lower end of the market use machined modelling boards for tooling, but these cannot provide a part-release surface for the types of high-requirement applications in motorsports and aerospace,” says Price. “They would first have to machine a master and then laminate and demold a tool from this before final surface machining. We’ve calculated our 360 product can eliminate at least 80 hours of shop time because it offers a far more streamlined process to produce a finished tool.”

Produced in sheets up to 1.3 meters by 0.8 meters and in thicknesses from 5-20 millimeters, 360 is bonded together using off-the-shelf structural adhesives and then machined. The machined surfaces do not need to be sealed but can be prepped for production with a few coats of standard mold release systems used in motorsports and aerospace.

“You simply buy the number of blocks required for the deepest section of the part you want to build,” says Price. “If your deepest section is 30 millimeters, then you buy two sheets of 360, bond them on top of each other and machine. If you’re building a 25-ft long part with a maximum depth of 15 mm, then you only need one board for depth, but several boards bonded horizontally to cover your total surface area.” Note, there is no need to buy extra sheets to stabilize the material. Also, the blocked-up sheets can be mounted onto a hollow egg-crate, 3D-printed grid or box support. “This enables significantly more efficient heat up and cool down, reducing cycle times and, thus, increases productivity,” adds Price.

Regarding material properties, CFP Composites cites excellent material performance, with results from testing at Intertek posted on the CFP Composites website. In addition to this baseline testing, the company is also completing parts cycling testing. “The parts manufacturers we have worked with said they want, on average, 100 pulls from their tooling,” says Price. “We are testing for this in-house, fully calibrated from the testing at Intertek. We have already completed 50 cycles of pulling parts from these tools. Within a couple of weeks, we will have exceeded 100 cycles and will then test again for mechanical properties. However, already we are seeing very minimal movement in the material, well within the tight tolerance requirements specified by the leading aerospace and motorsports manufacturers.”

Price says trials so far have demonstrated that machining of the 360 material is very straightforward. “You don’t need specialized drill heads, drill bits or dust extraction equipment. It’s really just a standard setup that you would use for any CFRP machining.” All of the suggested feeds and speeds are posted in the user manual online. “360 machines to a clean, smooth surface, with no fiber pullouts or exposed fibers,” he adds. “And there are no handling or toxicity issues. A lot of companies have in-house CNC machines, so with our system they can bring all of their tooling manufacture back in-house, where they are no longer paying a margin for it.”

As build rates and product/vehicle development continue to ramp — for example, single-aisle jetliners, eVTOL aircraft, electric cars and trucks, urban mobility, increasing amounts of composites in NASCAR and other motorsports, etc. — production of medium to large composite parts and tooling will continue to be a challenge. The list of issues and costs that can reportedly be avoided by using 360 is pretty significant:

“We believe 360 delivers the properties and performance needed, but with a much lower time and cost investment,” says Price. “Compared to Invar, using this material at the minimum surface thickness (plus surface area) offers a dramatic cost-down proposition and the possibility of having a production-ready tool in 1-2 weeks versus months. This, in turn, opens the door for further innovations in composite structures and flexibility in production.”