Manufactured by Hexagon, the 3D white light scanner is designed for high-speed, portable scanning of parts and surfaces. 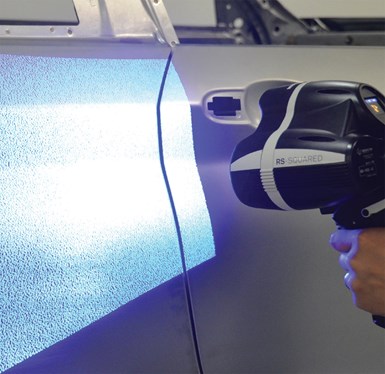 RS-SQUARED is a white light scanner that uses the Absolute Arm system to position large square “tiles” of 3D scan data, an alternative to application of reference markers or spray, or complex mechanical processes such as fringe projection. Up to four data tiles are captured every second, the company says, and minimal set-up time is required. A surface that would normally take an hour to scan can be digitalized in 10 minutes with the RS-SQUARED system, Exact Metrology reports. Like other Absolute Arm scanners, the RS-SQUARED is designed to be easily removed and remounted without requiring recalibration.

Furthermore, an additional feature is the extra-large scan “tile” option, measuring 300 x 300 mm, providing a faster scanning solution by permitting coverage of a larger area. The retained touch probe functionality of the Absolute Arm is designed to ensure that high-detail geometric features can be captured at any time by removing the scanner from the arm and connecting it to a probe. Data feedback and settings adjustment are built into the Absolute Arm 7-axis through its OLED on-wrist display, which can be integrated with the RS-SQUARED scanner.

The full scanning system accuracy of the RS-SQUARED area scanner and Absolute Arm 7-axis system is certified according to ISO 10360-8 Annex D.