The new approach for large scale 3D printing was validated via Thermwood’s LSAM system and printed parts up to 5 by 10 by 10 feet.

CNC machinery manufacturer Thermwood Corp. (Dale, Ind., U.S.) recently reported that it has successfully demonstrated a new approach to large scale 3D printing using its patented vertical layer print (VLP) technology. Vertical layer printing prints on a vertical rather than horizontal plane, enabling the printing of parts that are much taller than would be practical using traditional horizontal layer print. According to the company, parts more than 20 feet tall have already been printed on Thermwood’s larger LSAM (L-Sam) systems.

Thermwood says its LSAM large scale additive systems typically feature high walls, a fixed table and moving gantries. On these machines, when parts need to be vertically printed, they are printed on a vertical moving table and supported by stainless steel belts which slide on the main table. Last year, says the company, it introduced a lower cost LSAM system, the “MT,” which has a fixed gantry and a moving table. As a result, vertical printing on this system is said to require a fundamentally different approach. 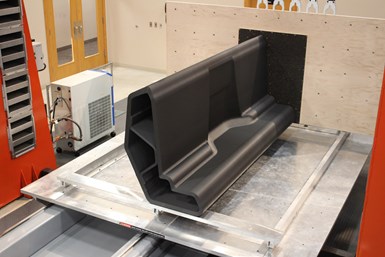 With this approach, Thermwood says parts are printed on a support structure which is fixed to the back and rides on the moving table. A second 5-by-10-foot print table is mounted vertically to the back of the main table. As the part grows, the moving table pulls the part onto the support structure. Using this approach, the LSAM-MT can then print parts up to 5 (Z Axis) by 10 (X Axis) by 10 feet (Y Axis).

To validate this approach, Thermwood says it has recently printed parts from both low- and high-temperature thermoplastic material. The first part printed was from carbon fiber reinforced ABS. This type of material is ideal for parts that operate at or just above room temperature such as industrial tooling, fixtures, foundry patterns and a variety of structural components.

Then, says the company, a second high-temperature part was successfully printed using Techmer- blended 25% carbon fiber-reinforced PSU/PESU. The high temperature PSU/PESU part printed weighed 1,190 pounds, about the limit for a moving table system. The print time to complete the part was 16 hours and 40 minutes.

Parts made from PSU, PESU, PEI or other materials that are processed at high temperatures are said to be typically used for molds and tooling that operate at elevated temperatures, often in an autoclave using pressure and vacuum. Thermwood says its ability to print large parts that sustain vacuum to aerospace standards without a secondary coating make this even more valuable.

Both the MT and Thermwood’s larger LSAM systems can both print and trim on the same machine. Parts are first printed at high speed and then, when cooled, machined to the final size and shape.

The larger scale LSAM machines can theoretically vertically print parts that weighed up to 50,000 pounds, which means there is no practical weight limitation and VLP equipped machines up to forty feet long have been built and delivered. 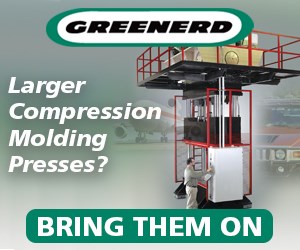