How do you make adhesives for electronics, vehicles and construction tougher? By making them weaker. That’s the proposed solution from a Purdue University (West Lafayette, Ind., U.S.) research team — well-known for its adhesive technology.

“We have been using inspiration from sea creatures to develop several new adhesives,” says Jonathan Wilker, a Purdue professor of chemistry and materials engineering, who helps lead the research team. The Purdue team added bonds that are broken easily throughout the material. When pressure or stress is applied to the glue, these sacrificial bonds are designed to absorb energy and break apart. Meanwhile, the rest of the larger adhesive system remains intact. The Purdue team’s work is published in the Journal of the American Chemical Society.

Managing how energy moves in adhesives

“The idea is somewhat similar to how a brick wall is made of bricks that are offset from each other,” says Wilker. “You stagger the bricks and cement so that a crack does not shoot right down through the cement lines. A crack hits the middle of a brick and the forces get spread out toward both sides, eventually decreasing to the point that the wall stays intact.”

Source | “Weak Bonds in a Biomimetic Adhesive …,” Journal of the American Chemical Society

“We added weak bonds within the adhesive so that mechanical forces and growing cracks lose energy by breaking these bonds instead of having the whole, larger material fracture. The idea is to manage how energy moves through the material. The overall adhesive system can become tougher and less likely to break apart when placed under mechanical stress.”

Wilker’s team tested this idea with several types of bonds. The ones that worked best were neither too weak nor too strong. He said that this technique for managing energy in adhesives might be a general phenomenon that could be applied to adhesives in industries ranging from consumer electronics to construction to manufacturing airplanes and automobiles. 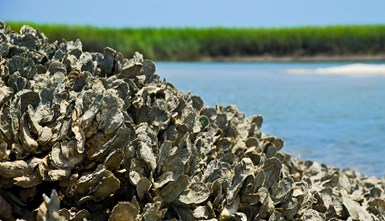 The team has hundreds of mussels and oysters growing in its laboratory for studying proteins used by the sea creatures attaching to rocks. After working to understand the nature of these natural adhesives, the researchers then generate several synthetic versions with different properties.

They have worked to patent several of their toxin-free adhesive systems with the Purdue Research Foundation Office of Technology Commercialization (OTC). The researchers are looking for partners to continue developing their technology. For more information on licensing and other opportunities, contact Joseph Kasper of OTC at jrkasper@prf.org.

Read the paper abstract below.

Developing future high performance adhesives is predicated upon achieving properties including strength and ductility. However, designing tough materials that are simultaneously strong and soft is usually contradictory in nature. Biological materials including shells and wood achieve impressive toughness by using weak bonds to connect larger structures at several length scales. Here we show that this toughness design approach can be applied to synthetic adhesives. A biomimetic adhesive polymer, poly(catechol-acrylic acid), was examined in conjunction with several compounds containing two organic functional groups. In a typical example the diol ethylene glycol decreased the overall system modulus. Performance was seen to increase significantly. Spectroscopic and physical methods indicated that these bifunctional additives created an interpolymeric network of weak hydrogen bonds. Material toughness was enhanced when breakable bonds were available to dissipate mechanical stresses while leaving the 1 surrounding matrix intact. These discoveries illustrate how a biological materials strategy of interplay between strength and ductility can be achieved with sacrificial bonds in an adhesive. Such an approach may be a general principle applicable to designing higher performance electronics, transportation, and aerospace systems.