The 90,000-square-foot expansion to the Kansas facilities includes upgraded hot-melt film and tape lines, and a new R&D lab.

A rendering of the current Newton, Kansas plant alongside the expanded facility. Source | Park Aerospace Corp.

Park Aerospace Corp. (Newton, Kan., U.S.) has announced that it has begun development of a 90,000-square-foot expansion of its manufacturing and development facilities located at the Newton City-County Airport in Kansas. The company held an official groundbreaking ceremony on Aug. 15. The new facility, which will include the construction of a redundant manufacturing facility located adjacent to Park’s existing Newton, Kansas facility, was originally announced on Dec. 17, 2018.

The expansion reportedly will double the size of the existing facility and is projected to cost approximately $20.5 million. The facility, originally designed as a redundant operation, is expected to be needed for additional manufacturing capacity in approximately two years. The expansion will include enhanced and upgraded hot-melt film and tape lines and mixing and delivery systems, an expanded production lab, a new R&D lab, additional freezer and storage space and additional infrastructure to support the expanded operation. 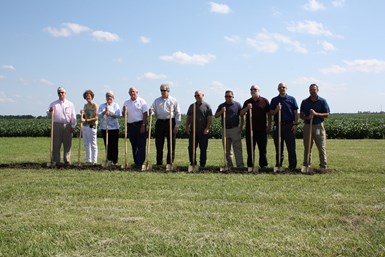 The company celebrated the groundbreaking for its facility expansion on Aug. 15, 2019. Source | Park Aerospace Corp.

“It has been a long and difficult journey since the ground-breaking for our first Newton, Kansas facility in that empty field at the Newton, Kansas Airport on that cold winter day in January of 2008,” says Brian Shore, chairman and CEO of Park Aerospace Corp. “Many sacrifices needed to be made. Much adversity needed to be faced. Many set-backs, disappointments, failures and loneliness had to be overcome. But, to me, it has all been worth it. Now, I am not saying we are where we want to be, because we are not. We have not yet achieved greatness as a company, which is our singular objective, but our people have accomplished great things against pretty steep odds.”

Among its capabilities, Park Aerospace Corp. develops and manufactures solution and hot-melt advanced composite materials used to produce composite structures for the global aerospace markets. Park also designs and fabricates composite parts, structures and assemblies and low-volume tooling for the aerospace industry. Target markets for Park’s composite parts and structures are, among others, prototype and development aircraft, special mission aircraft, spares for legacy military and civilian aircraft and exotic spacecraft.