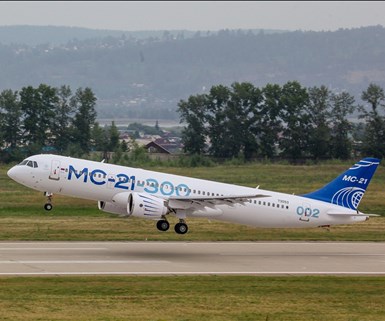 Irkut Corp. (Moscow, Russia) has announced that flight test experts from the European Union Aviation Safety Agency (EASA, Cologne, Germany) have completed the third flight session for the МS-21-300 certification program. This follows initial flight simulator sessions where EASA experts worked with their Russian colleagues toward certifying this new single-aisle jetliner for worldwide commercial service per EASA regulations. This third flight is the latest in a series of flights on the MS-21-300 performed by the EASA crew and the Yakovlev Design Bureau (a division of Irkut Corp.). Earlier this year, Irkut parent United Aircraft Corp. (UAC, Moscow, Russia) projected that certification would be complete in the second half of 2020.

The MS-21-300 seats up to 211 passengers and, with a range of 6,000 kilometers (3,730 miles), can fly from Moscow to any European destination. Irkut’s website shows firm orders for 175 planes, currently, all from Russia-based companies.

This aircraft also features the first composite wing on a commercial jetliner to be manufactured using resin infusion but without an autoclave. Read more about the MS-21’s composite construction in “Infused wing sheds light on aerocomposites future”.