Wet compression molding’s main advantages include the ability to apply resin outside of the mold, which frees up equipment for reduced cycle time and speeds resin impregnation versus the injection process required for resin transfer molding (RTM). The process also typically eliminates the preforming step, proceeding directly from wet fabric to a molded part. However, the process is best suited for flatter parts and less complex geometries. Also, both the blank and tooling must be designed to prevent wrinkles or other defects during molding.

Wet compression molding is not a new process. Molded Fiberglass Companies (MFG, Ashtabula, Ohio, U.S.) claims it has used the process for volume composites production since 1948. Typically, compression molding has been used to process bulk or sheet molding compound (BMC or SMC), as well as thermoplastic materials such as glass mat thermoplastic (GMT). Wet compression molding, however, does not use prefabricated sheets of resin/thermoplastic polymer combined with discontinuous fibers, but instead begins with dry continuous reinforcements and liquid resin. Wet molding’s resurgence began with its use by BMW to produce multiple carbon fiber reinforced plastic (CFRP) parts for its i3 and i8 models as well as the side sills for its new 7 Series passenger compartment, referred to as the "carbon core".

The sills that run along the lower sides of the BIW are assembled from two CFRP parts, also wet compression molded [in addition to the tunnel cover]. 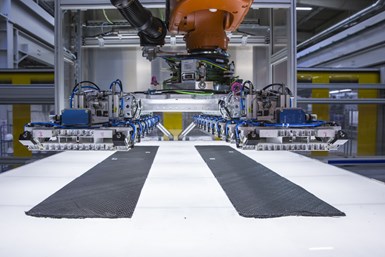 The resin is mixed and injected via a dual-head system supplied by Krauss-Maffei Corporation (Munich, Germany), with an integrated volume flowmeter that records the quantity applied to each stack. The resin forms a pool in the center of the stacks, leaving about an inch around the edges. “If the resin goes to the edges, then the needle grippers we use to pick up the preforms would get covered in resin and no longer work,” explains Wolferseder. “The resin application is programmed to fully impregnate to the edges during the pressing.”

Why two robots instead of one? “Because both preforms should be the same,” Wolferseder responds, “with the resin sitting on them for the same amount of time. If you only had one robot, one preform would have resin sitting for some seconds more than the other. Also, the robots are not very costly, so it is no issue to have two.” 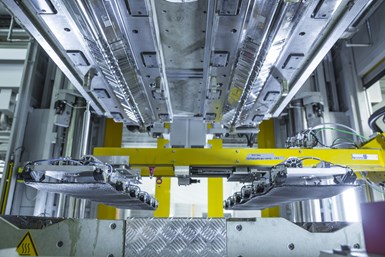 The NCF stacks are transferred to the mold. SOURCE | BMW AG

The resin sits for some seconds, but has been designed so that cure does not start until the press cycle. The wet preforms are then robotically placed into the press. Pressure is applied with the final 10 millimeters of “daylight” closed very slowly. “Our special recipe ... is to coordinate the temperature, pressure and resin curve,” says Wolferseder. 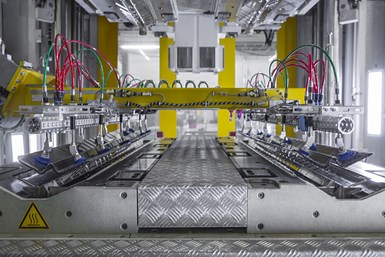 Cured parts are lifted from the mold. SOURCE | BMW

Two molded stacks are produced with one stroke. “We will cut these in half so that we end up with four parts from one cycle,” says Wolferseder. “We mostly use tools with four cavities to increase the overall output capacity of our machines.”

He points out that this is a completely unattended process and totally reliable. “There are two people at the end to take parts off the line and to do QA checks. If there is a defect, they can address this in the machines,” says Wolferseder. “Wet pressing is not unique,” he adds. “What is unique is this industrialization.”

Dieffenbacher says wet molding enables a high degree of automation, including tool change systems so that changeover from one product to another is possible within ~10 minutes. BMW's wet molding line uses Dieffenbacher's CompressLite press designed for high-precision, energy-efficient operation.

Dieffenbacher's process chain begins with ultrasonically welded stacks of carbon reinforcements. These are transported by a robot with a needle gripping system to a table where a camera checks the position of the stacks and reports on the accuracy of the layers.

The stacks are corrected if required and then placed on a shuttle table with an integrated weighing system. Two resin robots apply epoxy resin to the stacks, a process which is weight-controlled to ensure part reproducibility and quality. The resin cabin's ventilation system can handle 5,000 m3/hr for venting of fumes during this open process.

After the robot places the stacks into the mold, the press closes and cures the stacks at 150ºC. Once the press opens, a robot extracts the cured parts and places them into a cooling press. Cooled parts are then removed and placed on a discharge conveyor for quality inspection before being queued for vehicle assembly.

According to the 2015 SPE ACCE paper "Evaluation of a New ‘Inline Prepreg’ Process Approach to Established Processes for the Manufacturing of Structural Components out of Carbon Fibre Reinforced Plastics” presented by Fraunhofer Institute for Chemical Technology ICT (Pfinztal, Germany) and the Institute for Vehicle System Technology FAST at the Karlsruhe Institute for Technology (Karlsruhe, Germany), wet compression molding offers lower material cost and higher production capacity than autoclave or inline prepreg. The paper calculates a part cost of 70€, raw material cost of 49 €, daily production rate of 294 parts (>73,000 parts/yr) and staffing of four workers and one foreman per line. That line was calculated to include an automated cutting table, fiber storage units, a handling unit, a resin application unit, a press, a tool and finishing station.

Dow Automotive Systems (Horgen, Switzerland) announced at JEC Europe 2014 (Paris, France) that its low-viscosity, fast-cure VORAFORCE epoxy resin held particular promise for the wet compression molding process. Working with KraussMaffei (Munich, Germany) and Cannon (Peschiera, Itlay), Dow developed a process that applies resin in 15-20 seconds and cures in 30 seconds, for a total manufacturing time of less than 60 seconds. However, part complexity was still limited, with the process most suitable for relatively flat or lightly contoured parts.

Hexion (Columbus, OH, US) has also developed epoxy resins for liquid compression molding, offering a total cycle time of 75-135 seconds with additional reduction possible by replacing part of the in-mold cure with a postcure. 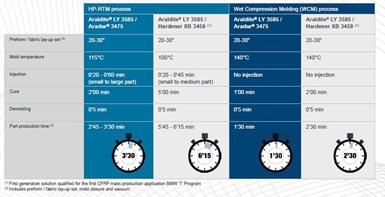 Huntsman Advanced Materials (Basel, Switzerland), however, has not only developed epoxy resins for wet compression molding, but claims to have advanced the process to achieve production cycles of less than 90 seconds for parts with complex geometry (medium draw or >2.5D). 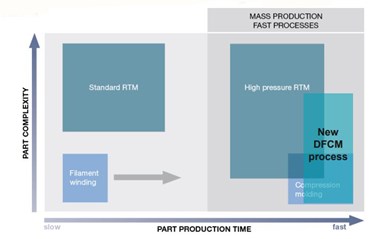 Termed Dynamic Fluid Compression Molding (DFCM), it is described as a lowpressure process (typically 30 bar) offering highly structural parts made with fast-cure Araldite epoxy resin, and often removes the need for a preform. DFCM reportedly can achieve fiber volume of up to 65% in a low-waste process that produces void-free parts for high mechanical performance. It also claims lower equipment investment vs. HP-RTM and elimination of racetracking and fiber wash issues.

Thanks to Arkema's (Colombes, France and King of Prussia, PA, US) Elium resins, wet compression molding may also be extended to thermoplastics. The liquid acrylic thermoplastic resins reportedly can be used in wet compression molding or cold press molding at temperatures ranging from  20°C to 80°C to make recyclable composite parts in a very efficient way. Arkema claims a variety of reinforcements can be used, as well as functional fillers to impart additional properties to the composite part. This material and process combination also touts 30-50% weight reduction vs. steel parts with the same resistance and lower part manufacturing costs vs. other thermoplastic technologies.