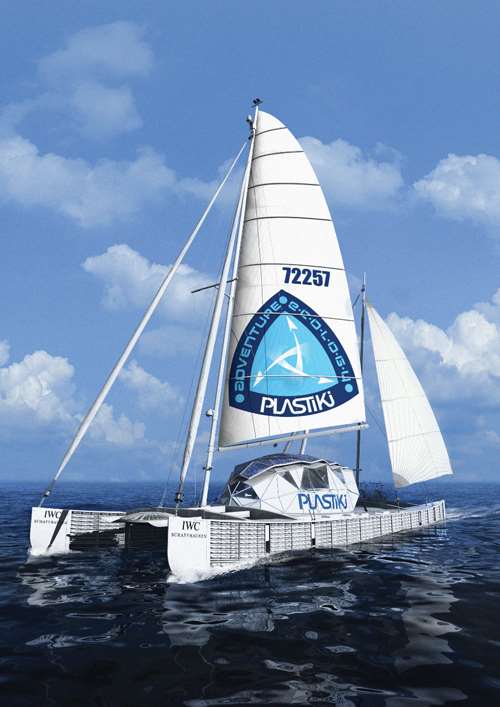 Fully 90 percent of the finished hull, beams and geodesic dome crew quarters will be composites made with recycled thermoplastics. The recesses in the twin hull structures will accommodate about 12,000 2-liter PET soda bottles to underscore de Rothschild’s overarching recycling theme. Source: Alcan Baltek

Fully 90 percent of the finished hull, beams and geodesic dome crew quarters will be composites made with recycled thermoplastics. The recesses in the twin hull structures will accommodate about 12,000 2-liter PET soda bottles to underscore de Rothschild’s overarching recycling theme. Source: Alcan Baltek

Construction technicians prepare to lay up a section of the Plastiki’s hull structure. Source: Alcan Baltek

Construction technicians prepare to lay up a section of the Plastiki’s hull structure. Source: Alcan Baltek

Plastiki, a 60-ft/18.5m catamaran, made completely from recycled and recyclable materials, will soon transport Adventure Ecology (San Francisco, Calif.) founder David de Rothschild and crew on an 11,000-mile expedition across the Pacific Ocean. Plastiki — so named to recall the balsa log raft used by famed explorer Thor Heyerdahl to sail across the Pacific in 1947 — will sail from San Francisco, Calif. to Sydney, Australia, with stops in a number of ecologically threatened areas. De Rothschild also pursues an even more ambitious goal: To challenge people to take the next step beyond embracing clean, renewable energy and see consumer waste as a potential resource. “That’s what this is all about,” he explains, “showcasing cradle-to-cradle products rather than cradle-to-grave.”

Plastiki’s design and construction is ambitious as well. Developed by Australian naval architect Andrew Dovell with engineering expertise contributed by High Modulus (Auckland, New Zealand), the boat structure will be made completely from polyethylene terephthalate (PET) and post-consumer PET bottles. Because the idea is to showcase consumer waste as a building material, de Rothschild is adamant that the PET bottles must be visible. Thus, the design basically takes a catamaran hull structure and removes the skin, leaving only the structural grid of bulkheads and stringers, between which 6,000 2-liter PET bottles per hull will be fitted and held in place by retaining nets and longitudinal PET tubes that run the length of the boat. The bottles will provide the boat’s flotation, each filled with dry-ice powder and resealed. The dry ice sublimates into carbon dioxide gas and pressurizes the bottles, making them rigid.

Plastiki’s hulls, deck (actually beams connecting the hulls) and watertight geodesic-dome-like cabin will be made from a self-reinforced polyethylene terephthalate (PET) material. Self-reinforced polymers or SRPs, as the name suggests, are composites in which the matrix component is reinforced with fibers spun from the same polymer.

According to project manager, Matthew Grey, the self-reinforced PET composite has 75 percent of the strength of fiberglass but only half the weight. Further, instead of having to be shredded and landfilled like many fiber-reinforced materials, this material, he says, is 100 percent recyclable. The self-reinforced PET, supplied in woven fabric form, is layed up over AIREX T91 PET foam core supplied by Alcan Composites (Sins, Switzerland). According to de Rothschild, “We basically put it under a vacuum, heat it, press it and create 60-ft long bonded PET panels.”

These PET sandwich laminates were tested in the Alcan Baltek (Northvale, N.J.) technical service labs for adhesion and flexural properties, and then the defined properties were used in the laminate design specifications for a 23-ft/7m prototype, which was completed in June 2009.

As previously reported in CT (see “Editor's Picks,” at right), the parts, each with unique skin layup schedules depending on anticipated loads, were vacuum bagged and compression molded at 415°F/214°C. According to Mike O’Reilly of San Francisco-based Level 2 Industries who helped develop the manufacturing methods, as many as 16,000 2-liter plastic bottles were lashed together to fill the open twin-hull structure for buoyancy. O’Reilly also reported that the team developed an epoxy resin from sugar and cashews for boat sections in which thermoplastic adhesives couldn’t be used: “The project showcases high-tech, innovative materials and technologies that, when smartly designed, can produce high-quality products while keeping environmental impact to a minimum.”

Since then, a brand new manufacturing process was developed in order to avoid using adhesives or glue that would contaminate the 100 percent PET structure. Thus, Plastiki will be assembled without glues or adhesive resins, with the goal of recycling the entire boat once the expedition is completed. De Rothschild claims that only 10 percent of the full-sized boat structure will be made using new materials. “We could potentially put together a boat that costs a fraction of what normal conventional boats are made of,” he said. But that’s not de Rothschild’s mission. Instead, the overriding goal is a boat built in such a way that he can “put it back into the system,” he explains. “So, it may come out being a jacket, a bag, or more bottles.”

After making a series of refinements to the design of the 23-ft prototype built last year, construction of the full-scale 60-ft catamaran in which de Rothschild and crew will make the voyage was begun and continues at this writing at Pier 31 on the San Francisco waterfront. The expedition’s launch date is targeted for sometime early this year.