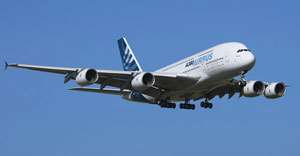 Source: Once again, the massive Airbus A380 stole the show during the Paris Air Show flying display.

Source: Once again, the massive Airbus A380 stole the show during the Paris Air Show flying display.

The 47th International Paris Air Show —Â— Salon International de l’Â’Aéronautique et de lÂ’’Espace —Â— held June 17-24 at Le Bourget airfield near Paris, was yet again a resounding success with more than 1,900 exhibitors and a very large contingent of both flying and static aircraft and equipment exhibits. Show organizers, the French aerospace industry society Groupement des Industries FranÃ§aises Aéronautiques et Spatiales (GIFAS), reported that the show attracted a record 153,920 visitors from the trade (12 percent more than in 2005), with the overall number of attendees, including public visitors, at well over 400,000.

While the display halls were extremely busy with plenty of interesting technology exhibited in the stands, there was little evidence of the truly new developments in composite technology that have characterized previous shows in recent years Â— innovations resulting in large part from developmental efforts on the now production-ready A380 from Airbus Industrie (Toulouse, France) and The Boeing Co.Â’’s (Seattle, Wash.) 787 Dreamliner.

There were, however, a number of existing technologies on show by new entrants into the composite sector, including, notably, two from Japan (see below). And it was abundantly clear from the large number of composites applications on display that the aerospace industry is geared up for the use of composites and expects continued long-term growth.

Volumes of composite material are now set to soar with the next generation commercial airliners taking to the skies over the coming years. The Boeing 787 Dreamliner and the redesigned Airbus A350 XWB are claiming the benefits of composites technology in terms of weight savings, environmental friendliness through lower fuel burn and reduced maintenance costs.

BoeingÂ’’s 787 VP and general manager Mike Bair gave a progress report on the 787, saying everything was on target for the first rollout in July Â—— a prediction that proved to be accurate (see Â“”Related Content,”Â” at left). Three new 787 production line photographs were released to the press, demonstrating that the main airframe sections were beginning to come together. Boeing noted that because there was a delay in the delivery of fasteners, the components were connected with temporary fasteners, which had to be replaced on the final assembly line.

Bair was questioned about whether the 787 would hit its weight target —Â— a crucial issue because weight reduction is a key benefit claimed by both Boeing and Airbus for their new, composites-intensive midsized aircraft. Bair said that a true picture of the aircraft’Â’s production weight would not be available until the seventh aircraft came off the assembly line, which would be the first delivery aircraft.

Bair also noted that a Â“phenomenal improvementÂ” in maintenance scheduling has been achieved from the use of composites. Specifically, the intervals between Â“CÂ” checks, when aircraft are inspected but not dismantled, would be extended from two to six years, while Â“DÂ” checks, which require that aircraft be stripped for detailed structural inspection, would occur only every 12 years rather than every six. Boeing, therefore, claims that Â“the 787 would not have to go into a hangar for 12 years from delivery to the customerÂ” —Â— a particularly relevant statistic to airlines because out-of-service aircraft produce no revenue.

In reference to BoeingÂ’’s 787-10 model, which would feature new technology that will permit the aircraft to carry 50 additional passengers without increasing maximum take-off weight, Bair said its launch would depend on the response from the marketplace. When questioned about the technology that would enable this, he said only that Â“it is commercially sensitive at this stage.Â”

Meanwhile, Airbus dominated press reports coming out of the event as it continued to rediscover itself in terms of new business. The company announced firm orders for 425 aircraft, valued at more than $45 billion (USD). Although the twice-delayed A350 XWB is running well behind the 787 in terms of entry into service, airline confidence in the product was back on track, with a total of 232 firm orders, as of the end of the Paris show, recorded since the launch of the A350 XWB in December 2006. With composites fueling innovation in commercial aircraft, the Airbus/Boeing rivalry will no doubt continue despite AirbusÂ’’ most recent challenges.

It also was quite clear from the show that the Japanese aerospace industry is intent on becoming a real contender in the marketplace with professional examples of research and development, component manufacture and product development activities on display. This was perhaps best demonstrated by the 90-seat Mitsubishi Regional Jet (MRJ) cabin mock-up and scale model, which attracted a lot of attention. Representatives from its builder, Mitsubishi Heavy Industries (MHI, Shinagawa, Japan), revealed that it had been in development since 2003 and, at this stage, was intended to gauge market interest. Although there is no specific program at this time, the MRJ, if built, would enter into service in 2012. Composites are targeted to the fuselage, wing and empennage, building on the technology development and experience gained by MHI from its development and production of the first composite wing boxes for the Boeing 787. Composites and a newly developed engine are projected to offer a 20 percent savings in fuel consumption compared to current regional jets.

Although Airbus Industrie’sÂ’ now-certified A380 superjumbo passenger jet once again overshadowed all other aircraft during the showÂ’’s flying display, the Bell/Agusta BA609 tiltrotor (see middle photo, this page) made an impressive debut. Designed for the civil aviation market and billed as Â“a new way to fly,Â” the BA609 is based on the original military V-22 Osprey concept Â—— a joint venture between Bell Helicopter Textron (Hurst, Texas) and The Boeing Co.Â’’s rotorcraft division in Ridley Park, Pa. During its early development phases in the 1990s, it was a showcase for composite primary structure demonstrators that, at the time, pushed the boundaries of composite technology in terms of unitization and bonding techniques that replaced fasteners, thereby minimizing weight. After a checkered history in terms of schedule compliance and, hence, time to market, the product has now evolved into a versatile machine for both the military (V-22) and the civilian (BA609) markets. The version flown at the show features an aluminum fuselage frame sheathed with composite skins and stringers; a single-piece composite top and bottom wingskin cover; and composite engine driveshafts.

Touted in the last decade as a potentially more cost-efficient manufacturing method for aircraft composites than autoclaved prepreg, liquid closed molding turned up in Paris on two significant programs.

Canadian aircraft manufacturer Bombardier Inc. (Montreal, Quebec, Canada) announced that its CRJ700 and CRJ900 NextGen aircraft have entered service with new advanced composite components, including flaps, vanes and ailerons fabricated in a resin transfer molding (RTM) process. The company claims that use of RTM has enabled significant parts consolidation Â— the total number of parts required for wing component assemblies has fallen by almost 80 percent for the aileron and 95 percent for the flap and vane. As has been the case with designers of the BoeingÂ’ 787 and the AirbusÂ’ A350, Bombardier’Â’s engineers anticipate reduced inspection and maintenance costs because, unlike their metal counterparts, the composite components are much less susceptible to fatigue and corrosion.

On show at the Japanese Aerospace Exploration Agency (JAXA) exhibit was another example of JapanÂ’s developmental efforts Â— a very high-quality, 6m/19.7-ft long demonstrator wing section made using vacuum-assisted resin transfer molding (VARTM). JAXA has been developing its process since 2005. The primary objective of the demonstrator was to prove manufacturing process control. The VARTMÂ’’d panel (see bottom photo, this page) is a half wing and includes the main spar and stringers together with manholes (consistent with a lower wing skin panel). It was manufactured from unidirectional T800SC carbon fiber (Toray Industries Inc., Tokyo, Japan) for the skin and Tenax IMS5131 noncrimp fabric (Toho Tenax Co. Ltd., Tokyo) for the stringers, each infused with epoxy resin (XNr6809/xnh6809, supplied by Nagase ChemteX Corp., Osaka, Japan).

The demonstratorÂ’’s simple architecture in terms of skin thickness and sculpturing is typical of a large commercial airliner vertical tail plane structure. The skin was designed using representative finite element modeling and computational fluid dynamics to ensure correct sizing. In the next stage of the development program, JAXA will build a demonstrator wingbox of the same size by assembling this lower skin to an upper skin, together with the associated ribs, and then use the assembled specimen to verify the strength as a primary VARTM structure. This step will help JAXA engineers identify risks in obtaining type certification. JAXA representatives at the stand said the technology had been supported thus far by a pyramid of testing, using coupons and elements, but they acknowledged that there remain a number challenges to be overcome in the application of VARTMÂ’’d composites to high-performance commercial flying surfaces. These include tolerances across the line of flight, in terms of controlling the aerodynamic surfaces, and the joining technology. According to JAXA, work is in progress to overcome these challenges before the next phase of structural testing. The panel, after assembly, will be installed in a structural test rig and subjected to tests carried out in close collaboration with Japanese and U.S. aviation authorities.

Although no actual material examples were displayed at the Plasan Sasa Ltd. stand, the armor specialist, based in Merom Hagalil, Israel, touted its many diverse composite applications for survivability solutions, ranging from personal protection systems to land- and sea-based systems to both fixed- and rotary-wing airborne armor systems. The latter are designed for versatility and already have been applied to a variety of aircraft. Plasan Sasa claimed the unique distinction as the only armorer to offer commercial aircraft manufacturers solutions that are all based on combat-proven technologies previously applied to Black Hawk, C130, Mi17 and Chinook helicopters. Product development benefits from the companyÂ’’s in-house research and testing program, which reportedly receives continuous combat performance feedback on product already in the field.

The company touted new armor that combines composite and ceramic materials and can be supplied as modular, portable kits or used in permanent, fixed installations, some of which can be applied without specific modification to the aircraft. The kits provide protection for pilots, aircrew and vulnerable parts of the airborne platform.

The U.K.’Â’s National Composites Network (NCN) announced that it is extending its activities into Europe by merging with the European Composites Network called IQ. Billed as a Â“unique knowledge transfer network,Â” NCN is jointly funded by government and industry and is open to the entire U.K. composites industry and it’s supply chain. The U.K. NCN has established a number of Regional Centers of Excellence where companies can obtain hands-on support and expert advice.

The NCN intends to grow this cluster of centers from existing U.K. capabilities and focus future infrastructure investment on Â“capability gaps,Â” as they are defined by the industry. This will enable the development of a national strategy for promoting the composites sector in the U.K. and abroad. The merger with the IQ network will help broker new collaborative teams within Europe to work together to further the technology and seek funding from the recently launched European Commission Framework Program 7. The seventh in a series of similar EU programs, FP7 is designed to improve EuropeÂ’’s competitive stance in the global marketplace by centralizing research-related EU initiatives under one roof. Administered in Luxembourg, FP7 is an outgrowth of the EU’Â’s ambitious Lisbon Strategy, a 10-year action plan conceived by the European Council in 2000, aimed at making the EU the most competitive and dynamic knowledge-based economy in the world.