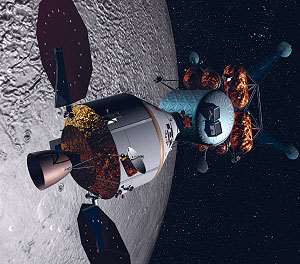 Although composites have set the materials standard in many areas of space vehicle construction, cryogenic tanks — containers capable of storing super-cooled liquid fuels under high pressure, such as liquid hydrogen and liquid oxygen used to power rocket motors — have been an elusive target. Persistent concerns about the potential for microcracking under extreme thermomechanical loading historically have tipped the scales toward heavier, but proven, metal designs. Recent developments, however, have raised hopes that the weight benefits of composites may finally be extended to fuel storage systems.

HPC profiled several promising composite cryogenic tank designs in its November 2005 issue (see “Related Content,” at left). Since then, newsworthy progress has been made in both materials research and tank design. The recent activity has been stimulated, in part, by NASA’s announcement in late 2006, of an ambitious new space exploration program, dubbed Orion, which might lead to the development of a state-of-the-art human space flight system capable of safely carrying astronauts to the International Space Station, the Moon and even Mars or more distant destinations. This new endeavor, if undertaken, will require the program’s smaller orbital or landing vehicles to make longer independent flights in deep space, putting significant demands on propulsion systems. Proponents of composite materials say that the need to carry more fuel in lighter, lower-mass containers might open the door for composite tank designs.

According to a January 2007 article in The Space Review magazine, NASA’s plans for greater safety and redundancy in vehicles deployed in space — while still in the preliminary stages — will require that all crewed vehicles have enough fuel to return to either an orbiting vessel or to Earth. Possible scenarios include caching of fuels, such as liquid hydrogen, liquid oxygen, helium or argon, at an orbital space depot or an inhabited Moon base. Small, lightweight and reusable composite tanks for these and other strategies are a strong possibility. Lockheed Martin’s deputy crew module manager Tom Megna tells HPC that the Orion team is planning to use composites not only in tanks but also in spacecraft structures and many other subsystems. Analysis is continuing in an effort to ensure that materials are applied in the most efficient manner, he says.

According to Tom Delay, a nonmetallic material researcher at NASA’s Marshall Space Center (Huntsville, Ala.), the Orion vehicle concepts, which include the Ares-1 launch vehicle and CEV (Crew Evacuation Vehicle) capsule, are relying on mature “heritage hardware” components for some applications. He says that getting engineers and designers to accept composite tanks for high-performance launch and space applications is to some extent a matter of changing people’s perceptions: “The baseline tank designs are mostly all-metallic because of the aggressive schedule and because composite tanks are considered to be risky for manned systems,” says Delay. “On the other hand, weight challenges, and the fact that the Ares-5 is an unmanned cargo vehicle, may make composites more attractive.”

Delay affirms this approach: “A high-pressure cryogenic COPV is a different animal — it requires materials that perform well cryogenically at much higher strain levels than are typically designed for primary structures.”

HyPerComp’s COPV is designed with a composite laminate wrapped around a seamless aluminum liner, unlike “linerless” concepts promoted by other investigators. The liner is effective as a permeation barrier, preventing escape of small gas molecules through the composite overwrap. It also prevents contact between the composite and potentially corrosive and oxidizing propellants that some say can chemically degrade the resin. While the liner increases overall tank weight, COPV designers don’t see that as a negative. If COPV technology was specified for the common bulkhead tank of the upper-stage Ares-1 launch vehicle, which will locate smaller helium tanks inside a larger liquid hydrogen tank, the COPV could reduce weight by 70 percent compared to the overwrapped-titanium spherical tanks developed in 1964 for the Apollo program.

Patterson is quick to point out that the COPV represents a practical halfway point between the heritage design and the ultimate linerless vessel. Delay adds, “The COPV concept is also a great test bed for developing a building-block approach toward an all-composite, linerless tank.”

The filament-wound overwrap comprises carbon fiber wetout with proprietary resins that have been tweaked for best performance at cryogenic temperature (-423°F/20°K). Hundreds of tests have been conducted over the past several years on material coupons and actual tanks. In testing, the tanks were filled and drained multiple times using liquid nitrogen and more recently, liquid hydrogen, and then pressurized to 4,000 psi to 7,000 psi (275.8 bar to 482.6 bar), depending on test objectives. Burst tests of down-selected tanks are now in progress using liquid helium. “I am very excited about the liquid helium tests because they really push the envelope on understanding true cryogenic performance of composite tanks,” says Patterson. “A vessel that performs well in this environment would certainly do well at slightly elevated temperatures, such as those required by liquid oxygen.”

More recently, he adds, additional tests are substantiating tank material performance. NASA is conducting ASTM 2290 (NOL tensile test) split-ring tensile tests on the materials that performed well in burst tests — not only under ambient conditions but also in liquid nitrogen and liquid hydrogen. At the same time, tensile tests of neat resins are being performed under the same conditions. The new data confirm that cryogenic pressure containment performance is significantly better with the optimized HyPerComp HEI535 resins than with epoxies not specifically designed for cryogenic applications. “In the last year, we’ve pushed the limits of cryogenic performance with pressure and thermal cycles,” says Patterson. “Our results show that we’re getting up to 50 percent better performance than can be obtained with standard structural epoxy.”

He points out that each element of the project — materials, tank design, manufacturing technology, even the cure procedures — can affect cryogenic performance, and that’s why actual tank article testing is so important. Accordingly, Patterson and Delay have subjected materials to some severe tests to demonstrate that composite liquid oxygen tanks can be designed to avoid auto-ignition when subjected to a mechanical impact. In a recent test, a 50-caliber bullet was shot at an all-composite, unlined liquid oxygen-filled tank. The tank wall was pierced by the projectile, but no ignition of the contents occurred despite the 15,780-joule impact. Perhaps more important, the tank didn’t fragment, which represents a big improvement over earlier generations of tank designs. “We’ve built a rock-solid technical foundation, compiled reams of data from literally hundreds of tests and are convinced we’ve got something here better than any historical solution,” claims Patterson.

Working without a liner

Composite Technology Development Inc. (CTD, Lafayette, Colo.) is one of several firms not profiled in HPC’s original 2005 article but now competing for prominence in the field of cryogenic tank design. CTD believes that it has the answer for cryogenic containment in space with its linerless tank concept. “We’ve developed a materials combination that achieves microcrack resistance at relatively high strain levels,” says company vice president Michael Tupper. “The tanks can contain cryogenic fuels and resist launch and orbital loads at the same time.” The company’s ultralight, linerless composite tanks (ULLCTs) are expected to reduce tank weight by as much as 25 percent, depending on design, compared to lined options. Like HyPerComp, CTD is targeting its tank technology not only to space propulsion systems but also other applications, such as alternative fuel storage in hybrid gas/electric cars.

Tupper says the proposed missions to the Moon and beyond will progressively increase the mass of propulsion systems and the storage systems for the additional fuel they will require. While any weight savings in the tanks will translate directly to greater system efficiency and payload capacity, Tupper acknowledges that long-standing concerns about the potential for microcrack-related failure under strain must be overcome. Toward that end, the CTD team has developed in-house an “integrated systematic approach,” which is being used to find microcrack-resistant combinations of resin and fiber. Materials, tank design, micromechanical and thermal modeling, novel resins and innovative processing are all part of the mix, notes Tupper. Numerous coupons on cross-ply laminates at a fiber/resin ratio of 60/40 have been fabricated and tested under strain, as have full-scale tank articles. Working with epoxies formulated at CTD and intermediate-modulus carbon fiber, the group is focusing on developing an analytical correlation between microcrack growth and permeability, measured experimentally from composite laminates subjected to biaxial load, explains Tupper. “Experiments to determine microcracking fracture toughness are the most effective method to rank materials for ULLCTs.”

The group is currently working with the Air Force Research Laboratory (AFRL) on a tank scale-up development program, also with an eye toward Orion. Says Tupper, “We’re looking to develop a 12-ft [3.7m] diameter tank but don’t have the infrastructure in-house to build a tank that large — we’re actively looking for a strategic partner.”

Another new player is Microcosm (El Segundo, Calif.), the parent company of Scorpius Space Launch Co., one of several private enterprises now racing to be the first to provide low-cost access to space. With two successful suborbital launches to its credit, Scorpius is promoting a less complicated “responsive” launch vehicle concept that uses a liquid oxygen/kerosene propulsion system and simpler stage integration.

Microcosm builds the launch components for Scorpius, including linerless all-composite liquid oxygen and kerosene tanks. Lead designer Aaron Leichner says the team has tried a number of different epoxy-based and urethane-based resin systems: “We’ve found the most success with a highly toughened epoxy system with a very high viscosity. This, of course, presents some processing issues when filament winding the tanks.” The company’s carbon fiber-reinforced Pressuremaxx tank has an architecture with many very thin plies in a dense layup, reports Leichner, which isolates any microcracks and keeps them from spreading to prevent leakage. To keep costs down, wound tanks are cured unbagged and without an autoclave or oven, using low-temperature cure cycles while maintaining slight pressure on the tank wall. Microcosm’s 42-inch diameter, 138-inch long (1.1m by 3.5m) tank currently in production is liquid oxygen-compatible, has an operating pressure of 550 psi/37.9 bar, a burst pressure of 2,125 psi/146.5 bar and weighs only 486 lb/221 kg, about half the weight of a comparable aluminum tank but with a higher safety factor. Says Leichner, “Our tank costs nearly 90 percent less than aluminum because of our lower processing costs and because of the expensive spinning and welding processes needed to produce an aluminum tank for this type of application.”

At press time, the U.S. Congress was debating a proposed 2007 federal budget that would slash funds for Orion and effectively prevent space deployment of composite fuel tanks in the near term. Come what may, composite tank manufacturers are betting that — sooner or later — launch vehicle designers will adopt their lightweight cryogenic solutions to reduce launch vehicle mass.