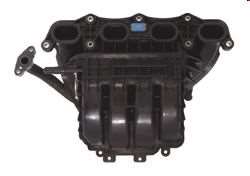 Mann + Hummel now injection molds the manifold in three individual pieces or shells, consisting of upper, inner and lower segments. Shells are injection molded, using Bayer Corp.'s (Pittsburgh, Pa., U.S.A., select 240) Durethan BKV-30H2.0 1510 black resin, a 30 percent glass-filled, heat stabilized polyamide (nylon) 6 thermoplastic selected for its strength, toughness and chemical/abrasion resistance. Shells are then joined by means of vibration welding: Parts are assembled in a press, which applies 0.5 tons of force on the joints. The welding mechanism uses electromagnetic fields to create rapid (200 Hz) movement of ±1 mm/.039 inch between the joined surfaces. The friction generates the heat necessary to melt the parts together. Specially designed "flash traps" on the part flanges prevent the weld bead from flowing outside joint walls, enhancing the part's external appearance and preventing disturbance of airflow inside the manifold cavity. The polyamide 6 resin offers a wider processing window for achieving optimum integrity and strength in vibration welds.

"Molding the core was the bottleneck," says Rick Weckerle, Mann + Hummel's manager of project engineering, of the previous process. The core material (tin bismuth, a eutectic alloy, which liquefies at 289°F, allowing it to be washed out of the part) was difficult to work with. "When it's molten, it's like water," he explains. "It's very invasive and there's lots of flash." Flash that remained on the core when it was loaded into the injection mold could cause pinholes or weaknesses in the manifold walls. "It was a difficult process to manage, and it was slower than the injection molding step," he adds, noting that the need to make tooling for both core and part made lost-core molding very capital intensive, as well. Further, the tin bismuth core restricted gate locations and fill-rate options normally available in classic injection molding. By contrast, the multi-shell technique eliminates the core-molding step and its associated costs and control issues, while the assembly/vibration welding sequence can take place well within the injection molding timeframe.