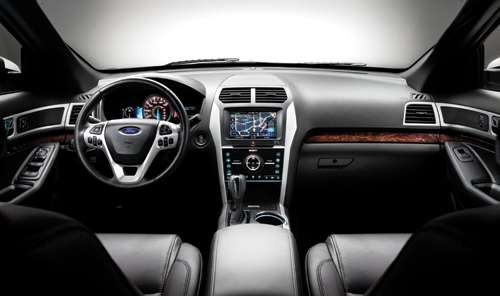 Ford engineers used the new process to analyze the stiffness of register vanes on the 2011 Explorer SUV (results shown at right). The analysis that made use of an anisotropy correction via Digimat software to predict fiber orientation in the finished part provided the best correlation to actual measured data. Source: Ford Motor Co.

One of the more interesting entries last fall in the 41st annual Society of Plastics Engineers Automotive Innovation Awards Competition wasn’t a part at all; it was a materials characterization process. Ford Motor Co.’s (Dearborn, Mich.) engineering group developed it for modeling and predictive analysis of automotive interior components. The procedure couples a number of commercial analysis codes with a proprietary materials database, enabling engineers to improve analytical modeling and prove-out of parts molded from neat or fiber-reinforced thermoplastics by injection, blow, microcellular-foam or compression molding. This enables engineers to design interior parts closer to their materials’ theoretical limits, achieving a 10 to 20 percent mass reduction. This improves fuel economy, reduces greenhouse-gas emissions, yields a 5 to 15 percent material cost reduction (averaging $10 USD per vehicle) and saves as much as $500,000 in testing costs per program. Ford also anticipates a not-yet-quantified reduction in costly late tooling changes that, historically, are made close to launch.

“Currently, plastic materials represent only 10 percent of the weight of a typical passenger vehicle,” says Jeff Webb, interior technical leader in Ford’s North American Engineering – Cockpit and Trim Integration operation. “Attempts to increase that percentage in the past have either failed outright or have been implemented only to revert back to steel, later on, for cost savings.”

Because the vast majority of interior components are thermoplastics, designers face some challenges when they model parts molded from these materials and analyze their performance. These include lack of directly useful dynamic data on strain-rate dependence; load-dependent strain-hardening in compression, tension and shear; temperature dependence; creep; load-dependent fracture; and anisotropy for glass-reinforced materials, because the high-pressure injection molding process orients high-aspect-ratio fillers in the direction of melt flow into the tool.

Formerly, the modeling process for a thermoplastic part began with the supplier’s datasheet, which nearly always reported monotonic (single-point) properties measured solely in the flow direction. It assumed that properties were isotropic in the cross-flow direction. Unfortunately, studies had long shown that with short-glass-reinforced materials, this was not the case — values measured at 90° to the flow could be as much as 60 percent lower than values in the flow direction. Using datasheet properties, then, could lead to overly optimistic estimates of mechanical properties across a part, particularly one with great geometric complexity. So an engineer either built in a big safety factor (e.g., thicker wall sections, which added to per-part cost and weight) or opted for the expensive and time-intensive make-and-break method to determine material usage. Similarly, everyone knew that despite the monotonic datasheet values, the actual materials were strain-rate, temperature and load dependent. So if an engineer was estimating how a part would behave at a different time, temperature, strain rate or load than was used to measure properties on test specimen via a standard ISO test protocol, there was no direct way to get the value needed to plug into analysis software.

During the mid- to late 1980s, GE Plastics (now SABIC Innovative Plastics, Pittsfield, Mass.) measured properties in both flow and cross-flow directions over a broad range of temperatures, loads and strain rates. Rather than report properties as a single data point, GE engineers built an extensive database with thousands of data points each for hundreds of the company’s materials. They assembled the data in a program called the Engineering Design Database (EDD). Proprietary algorithms enabled an engineer to interpolate or extrapolate from the measured data to estimate engineering properties in different conditions. This provided a much more realistic number that could be plugged directly into structural analysis software.

The system worked well and was the best option available at the time, but it was accessible only to someone who used GE materials. For everyone else, the process involved guesstimating how a thermoplastic material might behave under real-world conditions, which rarely were the same as prescribed under standardized test protocols. This information was fed into a structural analysis code, and parts were molded and subjected to mechanical testing; this likely led to costly and time-intensive design changes, which were implemented in the mesh or solid-model CAD data and then reprocessed.

With the new Ford procedure, the initial computer-aided engineering (CAE) analysis is performed using what the company calls its Material Data Cards, which are said to incorporate complete advanced characterization of key materials used in its vehicle interiors. These proprietary data (developed by Ford using internal testing resources and outside contracted testing facilities) are fed into a commercial moldfilling code, such as Moldflow (Autodesk Inc., Framingham, Mass.) or Moldex3D (CoreTech System Co. Ltd., Chupei City, Taiwan). This preliminary analysis gives a design direction — that is, it helps set wall thicknesses, indicates where additional structures (e.g., ribbing) might be needed to boost stiffness, etc.

A second step is used for reinforced plastics. It involves what Webb calls an “anisotropy correction” to predict fiber orientation, using the commercial package Digimat, a multiscale modeling package for multiphase composite materials and structures developed by e-Xstream engineering SA (Louvain-la-Neuve, Belgium). This enables engineers to predict anisotropic material properties at any location in the part. Results from this step are coupled with nonlinear structural analysis codes, such as Abaqus (Dassault Systèmes, Vélizy-Villacoublay, France) or LS-Dyna (Livermore Software Technology Corp., Livermore, Calif.), which are used to help optimize part design and process settings. Changes indicated during this step are fed back into the CAD data, and another iteration is completed.