Examined after three decades in service (half its predicted service life), this filament wound fiberglass pipe showed no signs of degradation. 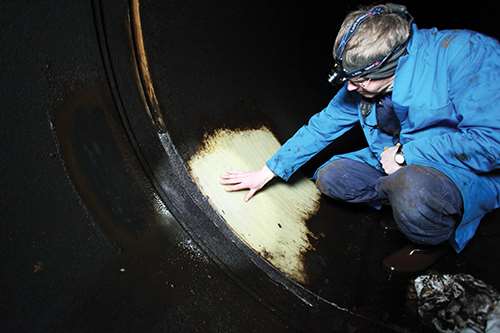 When inspectors entered the pipeline, there were no signs of wear or damage.

A view of the fiberglass/polyester pipeline at the Vinkelfallet power plant,

Thirty years ago, a 5-ft/1.5m-diameter, fiberglass/polyester pipeline was installed at the Vinkelfallet power plant, north of Lillehammer, Norway. The pipes were designed and filament wound in 1982 by APS Norway AS (Sandefjord, Norway). Since then, APS became, in turn, Veroc Technology, then Owens Corning Composite Solutions Business, and in 1998, Flowtite Technology AS. (The company is now part of Amiantit Company Group, Dammam, Saudi Arabia.) But when a detailed inspection of the pipeline was recently undertaken during a planned power plant shutdown, Flowtite was on hand: “As part of our followup of projects and quality assurance, we saw this as a good opportunity to be able to confirm pipe properties,” says Flowtite CEO Thomas Anderson.

Glass fiber-reinforced polymer (FRP) was specified for this particular pipeline in 1982 when a plant upgrade was undertaken by its owners, Gudbrandsdal Energy, during which an existing steel pipe was replaced. Designed by APS/Flowtite with large safety margins,  the pipes, says Gudmundur Palsson, Flowtite Technology’s chief engineer, were validated by long-term laboratory testing.

“We had no experience with FRP at that time,” recalls Stein Kotheim, the power plant’s production manager. “Would it be strong enough, and live up to the claims?” were among the company’s questions. “But, in view of the benefits, which included much easier installation than steel, we decided to try it,” he notes, “and we’ve had no issues. We expect the pipeline to last for the lifetime of the plant, 60 years.”

Although a thin layer of black soil covered the interior surface when inspectors entered the pipeline, it was easily washed away with water to reveal a smooth FRP inner surface, with no signs of wear or damage. Palsson says this confirmed that the pipeline had experienced no head loss; that is, its hydraulic properties had not been reduced by friction-related resistance to flow. “This observation matched our expectations and the published literature for FRP pipes,” he claims.

For a company that has FRP pipes installed in hydropower, water and sewage applications at thousands of sites worldwide — and for the composites industry — that’s very good news.