Though the company’s base is most certainly filament winding, CompoTech has pushed that process into new applications via pin-based winding, overwinding and innovative tooling and materials concepts. The result is a fluidity in process that often achieves new levels of performance via hybridization, for example, with metals and manufacturing methods like 3D printing and its own version of automated fiber laying (AFL). 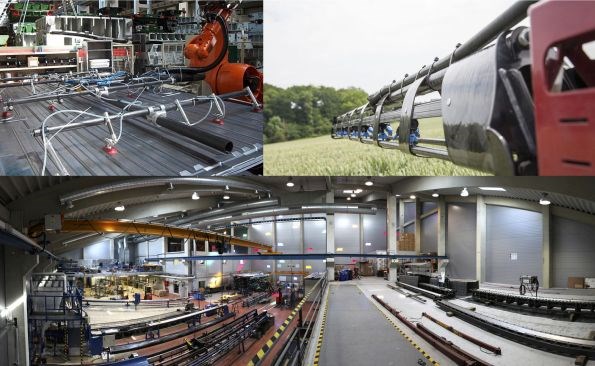 CompoTech (Sušice, Czech Republic) was founded in 1995 by Ondrej Uher and Vitek Sprdlik, now the company’s R&D director and technical director, respectively. “They originally built a filament winding machine for producing kayak and canoe paddle shafts which integrated their own technology for axial winding of 0° fibers,” explains CompoTech business development director Humphrey Carter. “This is now a core competency. We’ve shown that this construction produces stronger and stiffer structures with higher resistance to buckling of fibers.”

The company also developed the ability to wind integral composite hoops for connections.  These are used in parts from hang glider spars to driveshafts and industrial components. “CompoTech designs the machines and the control software,” says Carter. “Because we have full control of the process, we can better optimize design. We develop the process technology bespoke to the design criteria and can make this available for our technology partners as well as composite designers and producers. For example, we have licensed the technology to Southern Spars/North Marine Group.”

Currently, the company employs about 50 people, with almost half in design and engineering. It also has strong links to the Czech Technical University (CTU) in Prague and also to the University of West Bohemia (Pilsen, Czech Republic). CompoTech has developed composite solutions for a wide range of applications, including booms for agricultural spraying equipment, shafts for wind blade tips, bicycle frames and wheels, tubes and frames for automotive assembly grippers and lightweight gantry components for laser cutters and CNC machines.

“We have worked since the early 2000’s in the industrial and machine tool sector because of its prevalence in the Czech Republic,” Carter explains. “This is a very conservative industry that doesn’t know composites. Thus, we go to machine tool exhibitions and educate them.” That industry already knows that vibrations from accelerating parts and from cutting surfaces, such as milling teeth, cause a reduction in machining accuracy and tool life. CompoTech explains that the harmonics of a cutting tool — its vibration based on mass, stiffness and applied loads/forces — are often the limiting factor in performance and productivity. Not so well known is that carbon fiber reinforced plastic (CFRP) can be used in the structure of machines and tool holders to reduce mass and increase stiffness vs. steel. Using pitch fiber, CompoTech reports a 25% weight reduction and 200% stiffness increase (400 GPa achieved with unidirectional fiber), respectively. These are the two main ways to increase a structure’s natural frequency and prevent resonance. This is when the structure vibrates on its own, which exacerbates problems for already vibration-prone rotating parts and variable-speed machinery. 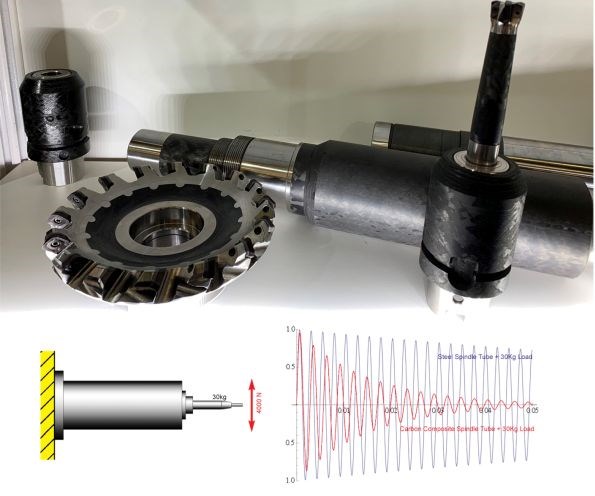 “Using our process for CFRP also reduces machine tool drift versus autoclaved composites because we induce less thermal stress,” adds Carter. “Tool holders are often long, slender beams that can change over time, depending on their design and material composition. This then affects the relational position of the tool, reducing its accuracy.”

For damping, CompoTech has gone beyond the inherent properties of fiber and polymer composites to pioneer inclusion of other materials, providing 12 to 20 times the damping of steel, directly countering vibration and acting to speed its decay (see graph above). “We have over a decade of experience is designing damped composites to achieve the desired properties and performance,” says Carter. One example is a new workpiece chuck design so that much less clamping force is required vs. a steel chuck. Another is the modified fixture for the turning of an aircraft engine low pressure turbine (LPT) casing made from hard-to-machine Inconel 718 alloy. Developed through the EU-funded INTEFIX project, CompoTech developed CFRP rings to replace metal rings used as locators in the fixture. The result was no loss in stiffness or function while improving workpiece behavior and better machining performance. In effect, the fixture was made intelligent, able to adapt the workpiece clamping as needed during the process. 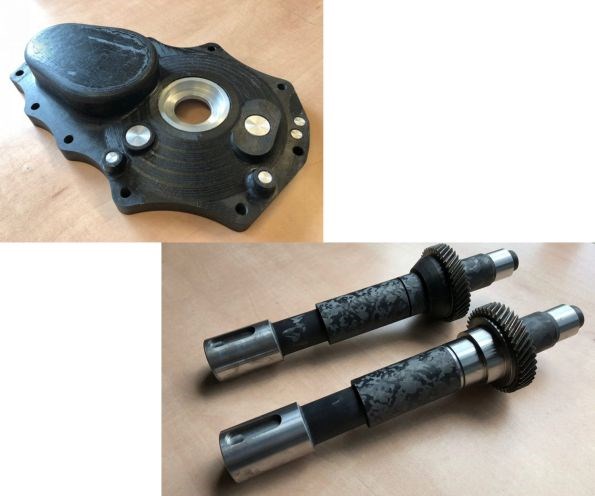 CompoTech also has ongoing work on an electric vehicle hybrid metal/composite gearbox, aiming to cut mass by 25 percent and also reduce noise by increasing the natural frequency and damping. This project (2016 to Oct 2019) is in collaboration with Czech Technical University (CTU) in Prague, Korea Institute of Machinery and Materials (KIMM, Daejeon, South Korea) and Samyang Reduction Gear Co. Ltd. (Inchon, South Korea). The main body of the gearbox will be composite with metal inserts for bearing surfaces. CompoTech designed and produced the upper and lower gearbox case, as well as the gear shafts. All comprise multiple parts, which are adhesively bonded. CTU has provided testing and FE analysis, while the project’s Korean partners provide the technical specification and will finish, assemble and test the gearboxes.

Carter explains that a lot of the R&D CompoTech performs for machine tools is then applied to new applications, like the aileron for the Aero Vodochody AEROSPACE (Odolena Voda, Czech Republic) L-39NG jet trainer. “This is a demanding application, with very high pressures at the trailing edge,” he says. In addition to flight loads, the armed version of the aircraft experiences pressure waves when wing-mounted rockets are fired. “With conventional composite construction, there was delamination at the aileron trailing edge,” notes Carter. “We eliminated all adhesive bonding and instead created an integral structure using wet filament winding and co-curing. We spent months developing the design and process steps. First, our robot-assisted winder is used to filament wind the four box beams which form the aileron spars. These are trapezoids and then D-shapes at the forward and trailing edges.” The trailing edge also has a separate piece put onto it to create a more aerodynamic surface.

“We then join all of these parts on their mandrels together and overwind to create the outer surfaces on top of the longitudinal ribs,” Carter continues. The whole structure is vacuum bagged and cured at room temperature with a post-cure at 90°C.

This project is a good example of how we work with a customer developing the process technology and design. Our idea is not to be mass producing ailerons or other parts. We would produce the machines and our customers will wind the parts.” The aileron is now flying and Aero Vodochody has a 4-year backlog for L-39NG jet trainer orders.

In general, CompoTech’s wet winding process is one based on precision, basically creating towpreg on the fly. “We mostly use epoxy resins and 100°C cure,” says Carter. “For applications requiring a higher Tg, such as some downhole tools we produced for use in the oil and gas industry, we can cure at 140°C.” 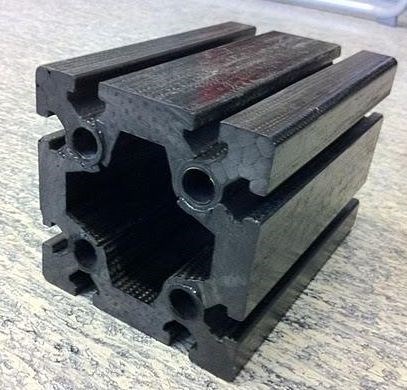 3D cellular composite (3Dc) is CompoTech’s name for a series of processes that produce a composite with three-dimensional reinforcement. Resulting in a cross section with a cellular appearance, this construction achieves high axial fiber content in the x-direction interconnected with fibers in the y- and z-directions, which form the cell walls. We created this process for thick parts that require very high axial stiffness,” says Carter. That stiffness is created by the very high 0° (axial) fiber content. The cell walls also carry shear load across the section via the cell walls and allow more interesting sections to be realized, such as the T-slot shown above.

The company is also 3D printing mandrels and supports to meet torsion and natural frequency requirements without thicker laminates. “This is another project working with CTU,” says Carter, “where we are developing automated internal design of structures.” He notes that thermoplastic composite winding is taking off massively. “That’s our next step, to combine our winding in thermoplastics with 3D printing and use folding to create innovative molding tools for composites as well as machine tool structures.” 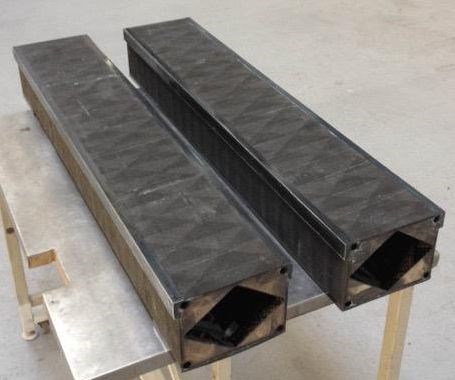