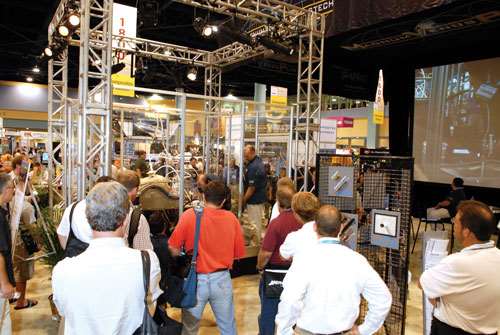 The 2010 IBEX show floor featured, as always, a Composites Pavilion, a convenient showcase of the materials, technologies and service providers for those who mold composite marine products. (Here, attendees in Miami Beach look on at one of the many live demos conducted in 2009 by exhibitors during show hours.) Source: IBEX

Boatbuilders who cruised to the International Boatbuilders’ Exhibition and Conference this year didn’t set their courses for Miami. IBEX didn’t tie up at its usual Florida mooring this year. Instead, the annual boatbuilders’ trade event exchanged its traditional harbor in the Miami Beach Convention Center for a more economically accessible inland port of call on the Ohio River. As this issue of CT went to press, the 2010 IBEX show convened Sept. 28 for a three-day stint at the Kentucky Exposition Center, in Louisville, Ky.

Also surprising, in the wake of a difficult two year-downturn (for just how down it was, see our marine market “Outlook” in this issue by clicking on "Marine composites: a new dawn?" under "Editor's Picks," at right), IBEX organizers gave recession-weary boatwrights a look at 71 new exhibitors in addition to the 459 who returned from last year’s show.

In her keynote address “Dare Mighty Things,” athlete, scholar and Kentucky native Tori Murden McClure — the first woman and first American to row solo across the Atlantic Ocean — recount-ed her first attempt in a 23-ft/7m boat in 1998, when she was nearly killed by storms during the worst North Atlantic hurricane season on record, and her successful crossing a year later.

All IBEX attendees and exhibitors were invited to the “Fourth Street Live!” opening night celebration, which was held outdoors in Louisville’s entertainment/retail venue located on Fourth St. in the heart of the city’s historic district. Festivities began at 6:30 p.m., with live music by The Louisville Crashers.

Those boatbuilders willing to arrive in Louisville a day ahead of the exhibition selected from three preshow, all-day educational sessions on Monday, Sept. 27. Two of the three were of interest to boatbuilders who use composites.

West System Inc. product distributors, the Gougeon Bros. (Bay City, Mich.), offered IBEX attendees the “Boat Repair and Construction Technology” seminar that was once available only to those willing to travel to the company’s Bay City headquarters. Designed for professionals who want to learn the best approaches to making long-lasting, cost-effective boat repairs and develop a deeper understanding of modern composite technology, the course covered basic repair techniques with epoxy, testing concepts and more.

A special “Using Marketing Intelligence for Market Growth” panel discussion took place Wednesday, Sept. 29. The moderator, NMMA’s director of industry statistics and research Jim Petru, along with five industry consultants, provided attendees with insights on how to grow market share using a combination of proprietary research tools, including NMMA’s 2009 Recreational Boating Statistical Abstract and research insights from the panelists’ respective organizations. Organizers promised, and delivered, the “most comprehensive offering on market research, statistics and data” in 2010. All attendees received a free DVD that contained the Abstract and the 2010 Boating Industry Marketing Communications Study Executive Summary.

At a unique evening discussion the same day, panelists Rob Kaidy (Ocean5 Naval Architects Inc., Stuart, Fla.), Vic Duppenthaler (OneWorld Marine Consulting Ltd., Macau, China) and several other veterans of offshore boatbuilding proffered guidance for boatbuilders who are, or would like to be, “Navigating the Global Marketplace.” Panelists noted that it’s common practice, today,  to source materials and labor from one country, assemble in another and export to a third. Their message? Opportunities abound for those who understand the regulations that govern such cross-border business dealings.

On Thursday, Sept. 30, closed-molding education was again on tap in an IBEX Conference session titled “Fail-Safe Infusion: Risk Management and Damage Control.” Speaker Andre Cocquyt, president of GRPguru.com (Brunswick, Maine), addressed the perceived risk of losing a hull or other large infused part when “something goes wrong.” Cocquyt argued that failure is unusual and that the postmortem that follows invariably reveals a procedural fault or poor preparation. He then conducted a step-by-step review of the proper procedures, discussing the ways and means of controlling infusion and establishing a well-documented standard operating procedure that forms the boatbuilder’s first line of defense against infusion failure.

In addition to the fee-based conference offerings, 20 free workshops were offered by a number of exhibitors on Tuesday and Wednesday. Several were of direct interest to composite boatbuilders. In “Light RTM Tooling: A Recipe for Success,” distributor Composites One’s (Arlington Hts., Ill.) Doug Smith aided those who have wished there was a recipe one could follow to guarantee closed-molding success, while coworker Hank Yeagley followed up with a comparison of popular closed-mold processes and the costs associated with them, to help molders select the best process for a boatyard’s manufacturing output in a companion session, “Decisions, Decisions ... How Do I Know Which Closed-Mold Process is Right for My Business?”