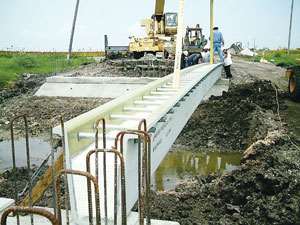 The Texas Dept. of Transportation (TxDOT) recently installed over a drainage ditch in Refugio County a new bridge that incorporates composite beams, replacing a single-span, steel girder bridge. Located 35 miles from Corpus Christi, the 50-ft/15.4m long, 32-ft/10m wide bridge is the state’s second to use fiber-reinforced polymer (FRP) composite beams to support a steel-reinforced concrete deck. Although upfront costs were higher, TxDOT opted for the composite solution because the subtropical climate and brackish ditch water had corroded the previous structure.

After room temperature cure, the beams were trimmed and assembled with shear transfer members — round metal brace bars, 2 inches/50 mm in diameter, that span the “U” opening, located every 16 inches/41 cm (see photo). Beams were placed 4 ft/1.23m on center on concrete abutments. To tie the beams to the deck, a grid of horizontal pipe was laid over the beams, and the deck concrete was poured over the pipe and beams, engaging both the pipe and the brace bars to achieve “composite” action — in this case, civil engineers use the term to describe the way the beams and the deck panel share the applied loads. At The University of Texas at Arlington, acoustic emission testing on several beams confirmed that they would perform adequately during load testing. In fact, stiffness was greater than expected. Haas-Anderson superintendent Roy Tijerina notes, “All of the beams arrived on one truck, and fewer people and minimal equipment were required, which equates to built-in time and cost efficiencies.”