This online sidebar for the March 2021 article, “Advancing the OOA infused wing box” aims to bring together what CW has written about hot drape forming over the years into one place and, hopefully, provide a useful resource. Below are excerpts from multiple articles —  from 2010 to 2020 — with photos to help demonstrate how hot drape forming helps to automate composites production.

Phil Grainger, GKN Aerospace’s technical director and chief technologist, explains that building such a large part manually, as was done on early A400M spars, is slow, with typically a 0.75kg/hr (1.5 lb/hr) lay down rate. However, during serial production, the part will be layed up flat, using an automated tape layer (ATL) and subsequently hot drape formed into the C-section shape. At this point, layup rates of 25 kg/hr (50 lb/hr) will be achievable. Grainger emphasizes that these are achievable average rates over a shift, on real parts.

To automate the process, GKN Aerospace has invested in a large ATL with a 20m/63-ft bed, manufactured by MTorres (Navarra, Spain). The ATL is able to lay the complex preforms in their developed shapes from unidirectional prepreg, using a 977-2 carbon fiber/toughened epoxy uni tape supplied by Cytec Engineered Materials Ltd. (now Solvay, Wrexham, U.K.). To form the C-section, the preform will be moved from the tape layer to a hot drape former provided by equipment manufacturer Aeroform Ltd. (Poole, Dorset, U.K.). To facilitate pulling a vacuum, the layup will be sandwiched between two diaphragms made from Kapton polyimide film, supplied by DuPont Electronic Technologies (Circleville, Ohio). The space between the films will be evacuated and then infrared heating will be applied from above the part to raise the temperature to 60°C/140°F over a period of one hour. This ensures that even the material at the center of the thickest section at the root end is warmed uniformly to the same temperature. Pressure then will be gently applied to form the laminate, constrained by the two diaphragms over a lightweight tool that accurately represents the inside surface of the spar. This C-forming process is achieved very slowly over a period of 20 minutes. (After forming, the Kapton films are discarded.) 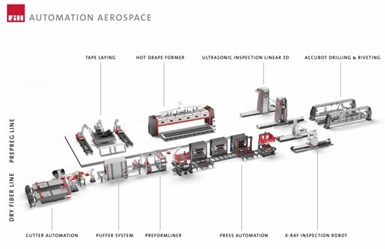 In the recent tour articles Sara Black and I wrote about high-performance composites in Israel, we noted that most of the companies were using hot drape forming. In fact, at Elbit Cyclone, our tour guide Jonathan Hulaty stated, “I don’t know how you do this type of high-rate prepreg parts production without hot drape forming,” referring to beams and stanchions for Boeing 787 assemblies. Hot drape formers (HDF) are also seen as indispensable by FBM and Israel Aerospace Industries.

Fill has supplied HDF systems for years, including several units in production at FACC. They are basically vacuum-forming systems, equipped with infrared or other types of heating elements and a reusable silicone rubber membrane to heat and compress—debulk—prepreg layups on their tools prior to cure. HDF becomes a key part in the complete aerocomposites production line shown below.

CW is led first to a cleanroom, where workers lay up a variety of parts. This day, at a number of stations, each equipped with a computerized layup-assist computer screen, the focus is parts for the Boeing 787. Easy-to-understand touch screens clearly show the layup angles for each ply, and how they’re to be positioned on each tool. A “guillotine” machine from Century Design (San Diego, CA, US), with a 2m-diameter rotary table and knife blade in the center, enables fast cutting of angled plies from the carbon/epoxy prepreg. Tools for the 787 door surrounds are shaped steel mandrels, typically longer than wide, from a few centimeters long up to ~2m in length, used to produce hundreds of frames, brackets, and clips. An automated flatbed cutting table from Assyst-Bullmer Inc. (Wakefield, UK) is used by the layup technicians to cut up to 50 stacked plies in one operation. 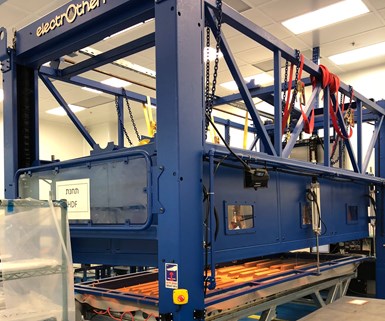 The cleanroom is dominated by a hot drape former (HDF). Made byElectroTherm Industry (Migdal HaEmek, Israel), the static machine (the company also makes moveable versions on carts) is a custom-made, vacuum-forming system, equipped with infrared heating elements and a silicone rubber membrane to heat and compress the composite layups on the tools, prior to cure. The HDF can shape as many as 50 stacked plies, says Poliker, with no intermediate debulking steps: “We were looking to eliminate process complexity, so we form the layups in one shot.” After the prepreg is heated and consolidated in the HDF, a caul is placed over the entire layup, prior to bagging. Made with a carbon fiber composite, the caul exhibits a rough surface finish. Poliker won’t reveal details of the proprietary material, but does say it can take the 177°C autoclave cure temperatures: “It simulates a matched-die tool.” He adds that the mandrel tools are reconditioned in-house, as needed. Bagging and consumables are supplied by Airtech International (Huntington Beach, CA, US).

From: “Serving the composites world in Israel and the US”

On the right, workers in the cleanroom for Boeing 787 parts lay up prepreg for an array of parts, from small clips and stanchions to complex J-, I- and C-beams, as well as multi-piece nose landing-gear doors. Prepreg is cut using a Assyst Bullmer (Wakefield, UK) automated fabric cutter and a guillotine machine for cutting thick stacks at any angle. The prepreg freezer is adjacent to the cleanroom. Hulaty notes that sometimes stacks of prepreg are cut, kitted and put back into the freezer. Aligned Vision (Chelmsford, MA, US) laser projection systems located throughout the cleanroom assist hand layup.

Carbon fiber-reinforced plastic (CFRP) floor beam parts are being laid up onmale metal mandrels. Hulaty details the streamlined process, “We lay up the prepreg stacks first and then apply them to the mandrel. This saves a ton of time vs. applying piecemeal onto the tool. The layups are then covered, with a CFRP caul of our own design, which helps to ensure 100% repeatability in the parts.”

A hot drape forming machine sits along the back wall of the cleanroom, enabling debulking of many parts per cycle. “I don’t know how you do this type of high-rate prepreg parts production without hot drape forming,” says Hulaty in reference to parts such as beams and stanchions. And yet, he acknowledges this step is not the bottleneck, nor is the autoclave. “Machining at the end, after curing, is the bottleneck,” he maintains, explaining that for long floor beam parts, it is faster to lay up a simple stack and machine it after cure. “The autoclave is not the issue because we can stack a lot of parts to cure at one time,” he adds. “So, we actually get a good production rate per cure cycle.” 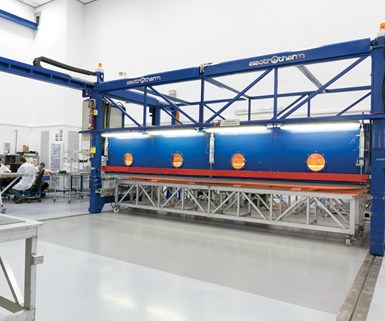 Designed to increase the total lift capability of the wing of an aircraft, an IBF [inboard flap] is mounted on the trailing edge of the wing to increase the wing’s surface during take-off and landing and improve stability during flight. Strata says it plans to fully automate the IBF manufacturing process, using hot drape forming (HDF) and computer-controlled robotic automated tape layup (ATL) machines, which gained first part qualification (FPQ) and FAI design and quality verifications early this year.

As part of the process, the company says the HDF machine preforms carbon fiber components for aircraft parts, enabling faster production of high-quality composite parts, and its infrared radiation heating system quickly and evenly softens carbon fiber to deliver accurate parts are said to be free of stress-wrinkling. Further, Strata’s two ATL machines lay unidirectional prepreg materials onto a flatbed before being transferred to a mold for further processing. According to Strata, its work envelope of 2.5 meters by 10 meters enables automated processing of large composite layups, eliminating the need for a separate ultrasonic cutting machine, and reducing processing times.

From: “Compression RTM for production of future aerostructures”

“For us, OPTICOMS was also about automation,” says Chevallet. Techni-Modul Engineering supplied not only a C-RTM injection system for the OPTICOMS project, but also a pick-and-place robot and a hot drape forming (HDF) machine, all integrated into a fully automated production cell. … “We have automated the classic manual stacking of plies using robotic pick and place,” says Chevallet. “The robot picks up plies from an automated cutter and transfers these to the heated preform tool which sits on a compaction table [Steps 1 and 6].” A peel ply (blue film in Step 6), breather (white material in Step 6) and hinged reusable vacuum membrane (light blue at left in Steps 2 and 6) are applied, followed by vacuum and heat to preshape and remove air from the textile stack (hot drape forming, HDF) while melting the thin thermoplastic veils to create a compacted preform.

Step 2. The preforming tools sit on a compaction table with a hinged reusable vacuum membrane (blue, at left) used to complete a heated debulk every 5-8 plies during layup. Photo Credit all images: Tecni-Modul Engineering.

Step 6. A robot places cut plies on the heated preform tool. Every 5-8 plies, a heated debulk is completed to compact the preform.

Breather is used to extract air across the preform.

After final debulk, the preform is cooled on the tool and cutouts are trimmed.

“How many plies you can compact at one time depends on the materials and shape of the part,” Chevallet explains. “For parts with low curvature, like a wingskin, then you could possibly compact every 50 plies. The OPTICOMS rib, however, has 90-degree angles, and the test I-beam stringer has T-shapes, so you must be careful not to form wrinkles in the plies during preforming.” He adds that such complex shapes may require compaction every 5-8 plies, but can still be part of a high-volume, industrialized process: Stack plies, 2-minute HDF compaction, reopen and stack again, followed by repeated compaction cycles with a final cooling of the preform on the tool before transfer to the RTM mold.