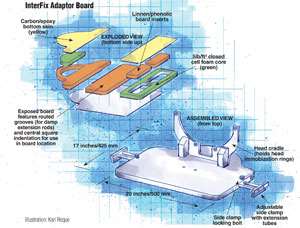 Although we take it for granted today, computed tomography (CT) scanning has been a revolutionary development in medical imaging that has enabled life-saving treatments for thousands of patients. The CT method produces a series of two-dimensional X-ray images, focused at regular intervals on planes that run through and progressively rotate around a central axis. The 2-D images are processed via computer software to form a three-dimensional image of soft body tissues. The first CT scanner was developed in the late 1960s at London’s Central Research Laboratory, which was owned at the time by the EMI Group (interestingly, research and development was funded by The Beatles’ record sales).

One of today’s many uses for CT scanning is in the diagnosis and treatment of tumors. Integra Radionics (Burlington, Mass.) is a developer and manufacturer of innovative equipment for stereotactic surgery (or stereotaxy), a minimally invasive form of surgical intervention that uses CT scanning and a three-dimensional coordinate system to locate small targets, such as cancerous tumors, inside the head. When a tumor is targeted, physicians can perform the needed action, such as biopsy, removal or radiosurgery. In the latter case, treatment involves a series of procedures in which X-rays are focused precisely from many angles on cancerous tissue. The key is not only to locate the tumor accurately but also to reproduce the correct coordinates each time the patient undergoes a treatment, thus avoiding injury to surrounding healthy tissue.

To facilitate this ac-curacy, Integra Radionics needed an adaptor board, a portable fixture to which it could attach its patented Gill-Thomas-Cosman (GTC) head ring device, which immobilizes the patient’s head and neck while the patient is lying on a CT scanner tabletop. The adaptor board would make it relatively easy to remove the head ring device from the scanner table and precisely reposition it on a radiation therapy treatment tabletop in another location, thus keeping the patient’s head in the correct spatial position relative to the radiation treatment beam. After 12 months of collaborative development with composites fabricator GMT Composites Inc. (Bristol, R.I.), Integra Radionics is nearly ready to debut the InterFix adaptor board.

Development of the adaptor board was driven by a number of criteria. “Accuracy and reproducibility in patient setup are integral to the success of this type of treatment,” says Integra Radionics’ senior mechanical engineer Matthew Shinopulos. Accordingly, the adaptor had to enable sturdy attachment of the head support rings as well as mate with the larger CT scanner and radiotherapy machine tabletops, with a tolerance of ±0.001 inch (±0.03 mm). It would also need to be extremely stiff, so it would not rock, tilt or deflect under the patient’s head and shoulder weight. Further, dimensional stability under a range of temperature and humidity conditions was essential so that the head rings would stay in the same position, treatment after treatment.

Beyond that, part materials had to be as transparent to treatment beams as possible to minimize beam attenuation. Shinopulos explains, “Denser, noncomposite materials, like metals, cause the beam to ‘scatter’ as the energy is being absorbed. A medical dosimetrist would have to go through considerable calculation steps to adjust beam strength because excessive scatter can lead to skin burns on the patient and less radiation going to the treatment area of interest.”

GMT’s owner David Schwartz explains a fourth objective: “The adaptor had to be machinable, so that several indentations could be routed, and drillable to accept the head ring fasteners, with high pullout strength.”

To meet all these design requirements, GMT determined that the InterFix adaptor would have to be a carbon/epoxy composite, the only material that could provide the necessary stiffness, thermal stability and X-ray transparency (radiolucency), typically absorbing less than 2 percent of radiation.

GMT, which has produced other parts for Integra Radionics for eight years, designed the adaptor based on the customer’s CAD drawings and load information, says Schwartz.

Roughly rectangular, the 20-inch-long, 17-inch-wide, 1-inch-thick (500 mm by 425 mm by 25 mm) part has a rounded extension on one side for the primary head ring support (see illustration at top of page). Both GMT and Shinopulos had a good idea of what type of materials and fiber architecture would be needed. “We built a series of prototypes for testing to verify the design,” notes Shinopulos.

GMT determined that a carbon fiber/epoxy-skinned sandwich structure was the best approach for the part because it would maximize strength and stiffness, with minimum effect on radiolucency. Weight was not a design driver, so ultralight honeycomb core wasn’t needed. Schwartz instead chose a proprietary 5 lb/ft3 closed-cell foam core that reduced core cost and provided greater skin bonding area. For the skins, GMT engineered balanced laminates consisting of six plies of plain-weave fabric prepreg (200 g/m2 areal weight) made with standard modulus 6K carbon fiber in a standard 250°F-/121°C-cure epoxy. The prepreg is supplied by GURIT (Wattwil, Switzerland).

Given the sandwich construction and the fact that the low-density foam has little intrinsic strength, the design challenge, says Schwartz, was how to anchor the fasteners that would attach the cradle and head rings. The answer was to tailor the core by adding inserts of high-strength precured linen/phenolic laminate board for improved pullout resistance at the fastener locations.

Linen is a term for a fine-denier cotton fabric that weighs less than 4 oz/yd2. The board’s supplier, Norplex Micarta (Postville, Iowa), laminates phenolic-impregnated linen fabrics under high pressure, producing a cured sheet stock that offers high compressive strength, good machinability, wear resistance and electrical insulating properties. The material also exhibits a lower coefficient of thermal expansion (CTE) than many materials, including the foam core, which helps maintain the dimensional stability of the adaptor.

He also points out that the linen/phenolic has relatively high radiolucency, with only 12 percent treatment beam attenuation.

The prepreg, foam core and linen/phenolic inserts are hand cut from flat goods using precise templates. First down in the flat, one-sided aluminum tool is what will be the top six-ply skin, followed by the core elements. Six separate pieces — three of linen/phenolic and three of foam, as shown in the drawing (on previous Web page) — fit together to form the core layer. The lower skin is split into two parts, exposing the linen/phenolic material at the midsection of the board.

The core pieces are bonded together and skins also are bonded to the core with Hysol structural aerospace-grade film adhesive, supplied by Henkel Corp. (Bay Point, Calif.). The part is vacuum-bagged and oven-cured at 250°F/121°C, says Schwartz.

After cure, parts are finished with a linear polyurethane to provide a glossy, nonabrasive finish. Schwartz points out that the finished adaptor boards are consistently flat across their entire dimensional plane, within a 0.005 inch (0.127 mm) tolerance, thanks to the balanced fiber architecture and precise core cuts.

The exposed linen/phenolic mid-section is routed with grooves that accommodate extension rods for the board’s side clamps and a square indentation, the latter used to accurately position the board on the larger treatment tabletops (see lower photo, on the right). The head ring device attaches with four metal bolts at the base of the rounded area. According to Shinopulos, the head ring system, which includes a complex framework of smaller parts, is made up of aluminum, carbon fiber/epoxy and plastic to minimize beam attenuation. Lastly, two holes — aligned with the routed grooves in the midsection — are drilled in each side edge, through which the clamp extension rods will pass.

To test the part, Shinopulos applied a 53-lb/24-kg downward force, calculated using an average patient shoulder and head weight plus the weight of the head ring device. With that force in place, a 10-lb/4.6-kg axial load also was applied and monitored with a dial indicator to test whether the board would experience deformation or movement. “It did not move,” he reports.

The adaptor enters service in January 2008, says Shinopulos. Based on testing and trials, he is happy with the part’s design. “It promises to deliver the performance we need at a reasonable cost,” he says.

Concludes Schwartz, “This was a situation where we were able to turn the customer’s concept into reality because of our expertise — in a collaborative manner.”