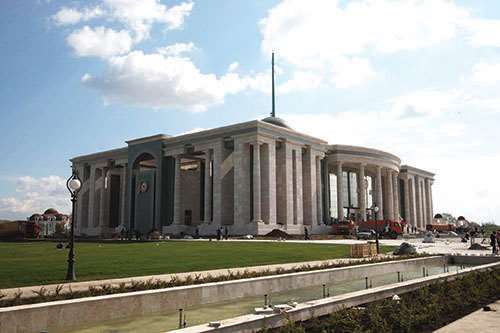 Parabeam fabric made it possible to reinforce both flat and curved marble cladding for columns, with less breakage. Source: Parabeam

The fabric enabled the use of thinner marble facings, which reduced cladding weight and permitted the use of less robust attachment systems. Source: Parabeam

Beautiful and aesthetically pleasing, marble has been used for millennia in architecture. Over hundreds of years, the use of marble in building construction evolved from massive load-bearing walls of solid stone to thin stone façades fastened to a building’s superstructure during the 20th Century. In 1974, when the Standard Oil skyscraper (later renamed the Amoco building) was built in Chicago, Ill., the marble façade panels on half the building soon cracked, bowed outward or sometimes completely detached under the onslaught of the Windy City’s severe freeze-thaw cycles, wind and moisture conditions. The building was eventually renovated and the façade panels were replaced.

The façade’s failure was due to the relatively brittle nature of the thin-cut stone. Since then, a variety of materials — glass fabrics, foam, plywood and honeycomb core — have been employed as a backside reinforcement for marble cladding, but Kunovar & Kamini (Ljubljana, Slovenia), a company with a long tradition in the field of natural stone fabrication, recently adopted trademarked Parabeam 3-D glass fabric, manufactured by Parabeam BV (Helmond, The Netherlands), to reinforce flat marble façades and curved column cladding.

Parabeam 3-D glass fabric is woven from E-glass yarn and consists of two deck layers joined by vertical “piles” (z-axis threads) that are woven into the deck layers to form an integral sandwich structure. Because of its inherent drapability — and unlike flat sandwich materials and plywood — Parabeam reinforcement conforms easily to curved column cladding and requires no heat or pressing equipment during application or installation. Parabeam adheres well to porous marble with epoxy resin, which is hand applied with a roller.

As the fabric absorbs the resin, capillary forces within the piles cause the fabric to rise to a preset height and even out any thickness variations in the marble. Several thicknesses are available, from 3 to 10 mm (0.12 to 0.4 inch), with the thickness dependent on the application. For extra reinforcement, several Parabeam layers can be wet out and stacked.

Kunovar & Kamini reports that the use of Parabeam has reduced marble waste from 30 percent to only 5 percent. “With Parabeam reinforcement, the marble cracks less easily, and when it does crack, it can often be repaired,” says the company. In addition, Parabeam reinforcement permits the use of thinner stone panels, resulting in significant weight reductions. For example, a column measuring 2m by 25m (6.5 ft by 81.25 ft) with a 30-mm/1.2-inch marble cover and a 1-mm/0.4-inch traditional reinforcement, such as plywood, weighs 50 metric tonnes/110,000 lb. Using Parabeam, Kunovar & Kamini was able to shave 1 mm/0.04 inch off the marble thickness, eliminate the plywood and, thus, reduce final column weight by 50 percent. Additionally, the lighter façade requires less robust attachment systems (bottom photo on left), which equates to more cost and weight savings. Tests show an overall increase in strength of more than 50 percent with Parabeam, compared to unreinforced marble cladding.