Engineering Insights: Not Your Father's EV

A stylish composite body makes the world's first all-electric sports car not only lean and green but efficient and fast as well.
#electricvehicles #outofautoclave #precursor 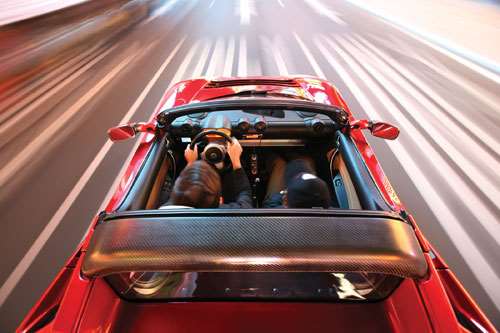 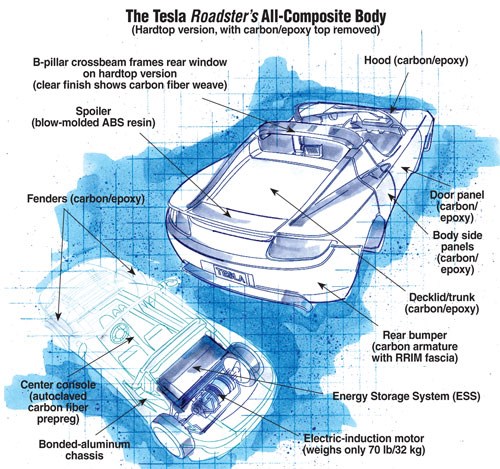 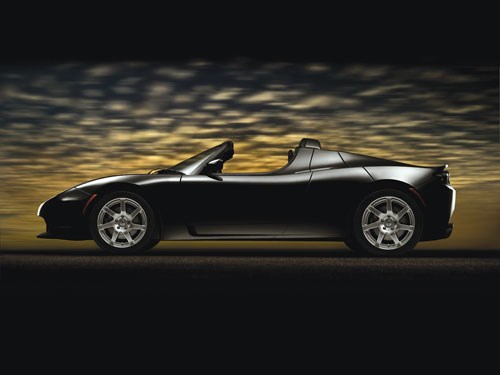 The Tesla Roadster has been extensively tested and is said to meet all relevant safety standards. The photo shows the carbon/epoxy body after impact on a test sled. The car provided excellent occupant protection because the passenger "cage" remained intact. Source: Tesla Motors

Use composite body panels, made of carbon/epoxy materials and mounted over a bonded-aluminum chassis to keep vehicle mass and center of gravity low yet permit aggressively aerodynamic and aesthetic styling freedom.

An all-electric sports car? If that sounds far-fetched, don’t tell the folks who are lining up for the new Tesla Roadster. Premiered last year by startup automaker Tesla Motors (San Carlos, Calif.), the sleek battery-powered two-seater can get you from 0 to 60 mph in just four seconds. Top speed: 130 mph/209 km.

Inconceivable? Those who know automotive history know better. While electric vehicles (EVs) have had a turbulent history in the auto industry, they were among the first passenger cars and once held many land speed and distance records. In fact, electrics dominated the auto market until their position was usurped by the internal-combustion engine, with its longer driving range and — at the time — cheap, accessible petroleum power source. Since then, interest in EVs has revived only sporadically, triggered by the oil crisis of the 1970s, the 1990s zero-emissions law in California and recent oil price increases.

Unfortunately, EVs of the 1970s and 1990s were built for conservation, not performance. They handled poorly, with sluggish acceleration, low top speeds, and shorter driving ranges than conventional cars. Other complaints included short battery lifespan, long battery recharge times, and — unless you drove in urban California — lack of access to recharging stations when away from home.

Tesla optimized the pros and addressed the cons by adopting a different worldview and identifying two critical mistakes that plagued the EV programs of traditional OEMs: inadequate understanding of available battery technology and inattention to the full range of their customers’ desires.

“Most electric cars were designed by and for people who fundamentally don’t think we should drive,” quips Martin Eberhard, Tesla CEO and the Roadster’s inventor. “This mentality has led to dozens of unappealing electric ‘punishment’ cars.” In sharp contrast, Tesla has combined superior battery technology and lightweight composite body construction, hoping to appeal to auto enthusiasts and environmentalists alike. “We at Tesla Motors love cars. Tesla cars are built for people who love to drive. So our optimization is not for ultimate low cost, but rather for performance, aesthetics and sex appeal.”

Li-ion cells have the best energy/weight ratios of any current commercial batteries. They are lightweight, compact, maintenance-free, exhibit no memory effect (loss of charging capacity when partially charged batteries are recharged, as is common with older nickel-cadmium cells), recharge quickly and lose charge slowly when not in use. Powered by Li-ion batteries, full-size, highway-capable EVs can travel as far on a single charge as conventional vehicles do on a tank of fuel. The Roadster’s estimated range of 250 miles/402 km per charge (EPA Highway) is a significant improvement over GM’s EV1, which averaged 100 to 120 miles (161 to 193 km) per charge. Even better, the Roadster halves the EV1’s eight-second 0 to 60 mph acceleration time and far exceeds its 80 mph (129 kmh) top speed. Moreover, the Roadster’s 70-lb (32-kg) electric-induction motor cranks out 248 hp and redlines at 13,000 rpm. It requires only a two-speed gearbox to provide true sportscar performance at an EPA equivalent fuel economy of 135 mpg (57 km/liter) and estimated energy costs as low as $0.01 (USD) per mile. GM’s Volt plug-in electric vehicle introduced at the Detroit Auto Show in January (see end note) also will use Li-ion cells.

Not by Batteries Alone

These achievements owe much to the sleek composite body styled by Barney Hatt, principal designer at Lotus Design (Hethel, U.K.), and engineered by Tesla’s Body Engineering team in the U.K.

“From the earliest days developing the Roadster’s body, we realized we had several major challenges,” says Barrie Dickinson, Tesla’s director of Body Engineering. “We had to achieve low aerodynamic drag to increase efficiency yet keep mass down to maintain a high power-to-weight ratio and achieve maximum acceleration. Equally important was our imperative for body styling that would make people desperately want the car — irrespective of its efficiency or performance. Selecting the right body material and manufacturing process was crucial to achieving our goal.”

Given the design goals, composites were a logical starting point. The team benchmarked existing composite-bodied vehicles to understand the benefits and challenges of various materials/process options. For a quality feel, they wanted body-panel stiffness equivalent to that of standard 0.04 inch/0.9 mm steel panels, which required options with high specific bending stiffness. Because the Roadster’s target retail price was high (fully loaded, about $100,000 USD) and production volumes low (2,000 units annually), carbon fiber was deemed practical.

Several production options were explored: autoclave cure was rejected as too slow and costly, with a processor base insufficient to handle anticipated volumes; vacuum bagging with ambient or oven cure was rejected over concerns that it would not meet A-surface aesthetics in the panels’ complex geometries. Ultimately, resin transfer molding (RTM) was selected for its rapid processing cycles, excellent surface quality, and the ability, via use of a two-part closed mold, to precisely control part thickness and thereby increase stiffness or strength locally.

A trial tool was built in modeling block, with anticipated design features in terms of thickness, net-shaped edges and areas of foam-filled reinforcement as well as aggressive variation in the contours of the Class A surface form. This provided a method to test layup configurations on tooling with realistically complex features.

“Each Tesla Roadster sports a skin made from lightweight carbon fiber/epoxy composite that took two years of design, prototyping, test, redesign, retest, meetings and arguments to develop,” explains Dickinson. “It was a slow process of beating the problems down, one by one. How do we minimize mass? How do we meet Class A surface quality? How do we ensure the process is repeatable?”

Upwards of 30 different laminate configurations were initially trialed by Tesla’s molder, Ex-Press Plastics Ltd. (Loddon, U.K.). “We’ve spent the last year refining our manufacturing solution,” he continues. “Our final configuration allows us to maintain bending stiffness close to that of steel yet lose about 50 lb [23 kg] per panel set vs. glass-reinforced polyester with comparable stiffness.”

In an attempt to optimize bending stiffness while managing weight, costs and aesthetics, the engineering team arrived at a unique sandwich structure that places the carbon fiber reinforcement outside the part’s neutral axis. The final configuration features skins of 2×2 twill-weave carbon-fiber cloth supplied by Carr Reinforcements Ltd. (Stockport, Cheshire, U.K.), around a core of 0.2-inch/4.0-mm Polymat glass/polypropylene (PP) fabric supplied by Flemings Textiles Ltd., a div. of Scott and Fyfe (Kilmarnock, U.K.). This cold-formable core is, itself, a sandwich of randomly oriented chopped-glass mat around a high-loft reticulated PP foam structure. The Polymat sandwich, which was specially modified for Tesla, places glass reinforcement in the part’s tension zone while its open structure permits easy resin flow through the center of the part for thorough wetout with no fiber wash. For body panels, the layup is impregnated with epoxy RENLAM LY11 epoxy resin from Huntsman Advanced Materials (The Woodlands, Texas), selected for its high specific strength. (High-reactivity unsaturated polyester resins are used for some nonappearance parts, and are supplied by Cray Valley Ltd. (Drocourt, France) and Scott Bader Company Ltd. (Northamptonshire, U.K.). The resulting laminate is strong in both compression and tension.

Tesla eliminated a costly postmold finishing step and precluded potential surface porosity issues by comolding the primer coat. Prior to layup, the A-surface of the tool is sprayed with a special Duratec polyester primer supplied by Hawkeye Industries Inc. (Marrieta, Ga.), which subsequently adheres to the resin and provides a smooth, paint-ready surface out of the tool.

When final material/process configuration was determined for the body panels, the team faced a challenge of a different sort. “We encountered a major hurdle when global supplies of the carbon fiber used to make the cloth we’d chosen dried up due to demand from aerospace and defense manufacturers,” adds Dickinson. “But our supply-chain team rose to the occasion, generating so much excitement for the Tesla Motors vision that a new supplier allocated the needed material to us.”

Production tools are steel or aluminum, depending on surface complexity, and were produced by a number of U.K.-based toolmakers. According to Tesla, a single set will meet annual production volumes. Typical cycle times run 40 minutes per part. The largest part is the body side panel, and the most challenging to mold is the rear liftgate.

All external body panels — hood, decklid, roof, fenders, and doors — are resin transfer molded by Ex-Press Plastics from the unique “sandwich-cored sandwich” composite. However, the center console, which features an exposed carbon fabric weave, is an autoclaved prepreg part, produced by race car molding specialist Belco Avia (San Pietro, Mosezzo, Italy). The material for the console was selected for its lightweight stiffness because a console is often used as a brace point when occupants exit the car and because it takes up less interior space, which is at a premium in this compact vehicle. Bumpers and spoilers are turned out by Polytec Holden (Bromyard, Herefordshire, U.K.), a division of Austria-based Polytec Group. Bumper beams are polyurethane foam over a carbon-fiber armature with an RRIM polyurethane fascia. The spoiler is blowmolded acrylonitrile-butadiene-styrene (ABS).

Lotus Cars provides vehicle assembly and painting on a contract basis in the U.K. The vehicle was extensively safety tested and reportedly complies with relevant global safety standards.

Available for sale this summer, the Roadster may be the vehicle that starts to push EVs out of niche obscurity and into the mainstream. Tesla spokespeople are more optimistic, claiming it will start a revolution in personal transportation with profound political and environmental implications.