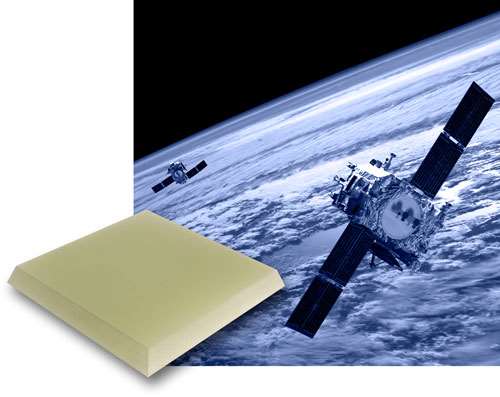 One of the STEREO observatories, which both make use of the pictured glass/epoxy panel product as an insulating material to minimize thermal transfer. Source: Norplex-Micarta

One of the STEREO observatories, which both make use of the pictured glass/epoxy panel product as an insulating material to minimize thermal transfer. Source: Norplex-Micarta

NASA’s Solar Terrestrial Relations Observatory (STEREO), launched in October 2006, is expected to provide a revolutionary view of our solar system. Its two nearly identical observatories — one ahead of Earth in its orbit, the other trailing behind — are designed to gather images of the Sun simultaneously from different angles to produce 3-D pictures of coronal mass ejections, the violent solar eruptions that can disrupt satellite communications and power grid operation. On Jan. 24 this year, they reached position and began sending data.

The STEREO observatories, designed and built by the Johns Hopkins University Applied Physics Laboratory (APL) in Laurel, Md., carry a number of critical devices, including “star trackers” that use computers and star maps to determine the orientation and pointing accuracy of onboard instruments. To ensure that the spacecraft battery and other key devices work properly, APL protected them with thermal isolation spacers that prevent the temperature of one device from affecting the controls of another. The spacers are placed between each device and the bracket that holds it in place. The designers needed an insulating material for the spacers that could withstand launch stresses and then maintain adequate strength and insulation properties when exposed to the extreme temperatures of outer space.

A fiberglass/epoxy thermoset composite panel product, NP500CR, manufactured by Norplex-Micarta (Postville, Iowa) for cryogenic applications, was chosen for the spacers. Produced in 36-inch by 48-inch (900 mm by 1,200 mm) sheets in several thicknesses of less than 0.5 inch/12.5 mm, the material was cut to proprietary dimensions by a contractor to APL, says Norplex-Micarta’s director of business development, Alan Johnson. Although ceramics were considered, they were more expensive than the composite, and their brittleness could have resulted in fracture under launch stresses. Metals were rejected because greater thickness was needed for comparable stiffness, and the heavier metal versions would have taken up too much space. In addition to its absolute-zero rating (-460°F/-273°C), the composite has the shear, tensile and compressive strength necessary to withstand launch stresses and weighs only 25 percent as much as a comparable steel spacer. Also, it reportedly can endure occasional impact from flying objects as well as strong acoustic vibrations and maintains its high strength despite extremes of temperature in space due to solar radiation. NP500CR meets all NEMA G-10 requirements and is manufactured to the NIST G-10CR process specification for materials used in cryogenic applications.