A team of engineering students at ETH Zurich (Zurich, Switzerland) is working to develop an autonomous agricultural robot to serve as a sustainable alternative for the use of herbicides in agriculture. The project began in September 2019, and in June 2020, the first functional prototype, called Rowesys (short for Robotic Weeding System), went into a practical testing phase.

The project, run by 10 ETH Zurich students with the assistance of eight coaches and sponsors, aims to demonstrate how digitalization and smart technology can help minimize negative environmental effects of herbicides within the agriculture industry. Among the project’s sponsors is engineering company Scheurer Swiss GmbH (Volketswil, Switzerland), which is providing the team with 3D-printed, carbon fiber-reinforced components for the robot as well as its engineering expertise in an advisory capacity. 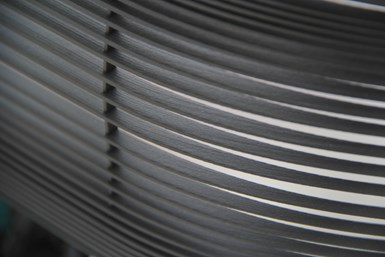 Curved, 3D-printed composite slats on the front and back of the robot enable LED light displays to be seen through the chassis. Source | Scheurer Swiss GmbH

The underlying concept for the Rowesys robot is based on mechanical, rather than chemical, weed killing. The agricultural robot pulls small plows through the soil that pull weeds out of the ground by the roots, leaving them to dry up on the surface. The robot drives autonomously through the rows of plants, detecting the end of the field and moving between the roads with the help of built-in cameras.

The Rowesys prototype is said to meet many of the project’s goals for an autonomous agricultural robot in terms of efficiency, reliability, autonomy, safety and user-friendliness. According to Scheurer Swiss GmbH, the use of 3D-printed, carbon fiber-reinforced materials for many of the robot’s components helps contribute both to the cost efficiency of the project and the robot’s design flexibility. “Only with the technology of carbon-reinforced 3D printing is it even possible to produce such a precisely fitting, filigree and yet stable component,” says Dominik Scheurer, CEO of Scheurer Swiss GmbH.

Given the design parameters and delicate nature of the components, chopped carbon fiber-filled polyamide 12 (PA12) was chosen, and the parts were manufactured via a select laser sintering (SLS) additive process.

The robot has an aluminum chassis, with composites featured in the most detailed components such as parts of the robot’s top cover, wafer-thin slats on the front and back of the robot, a filigree component that connects the electronics to the chassis, and fixation brackets on the bottom of the robot. Slats in the chassis are backed by LED lights that signal the robot’s status during operation. The electronics connector’s unique shape is designed for minimum material usage to reduce weight on the robot, with composites contributing to the stability requirements needed to hold the electronics in place while the robot is moving.

The electronics connector within the chassis of the robot is designed for minimal material usage while maintaining a high degree of stability. Source | Scheurer Swiss GmbH

Currently, the project has resulted in a functional prototype designed specifically for sugar beet fields — chosen for the relatively high use of herbicides by sugar beet farmers. Test results so far have indicated that using a mechanical weeding robot like Rowesys can significantly reduce pollution of groundwater, air and the crops themselves.

“What motivated me about this project, apart from the relevance of what I learned and the chance to gain practical experience in teamwork, was the sustainability of herbicide-free sugar beet cultivation. Because up to now, there has been no investment in more sustainable production in this area of agriculture,” says Nico Burger, ETH student on the software and controls team at Rowesys.

“The focus project Rowesys is an example of how digitization and the use of innovative materials can produce efficient and intelligent technical achievements,” Scheurer says.