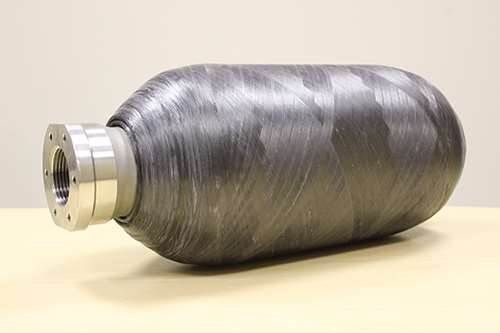 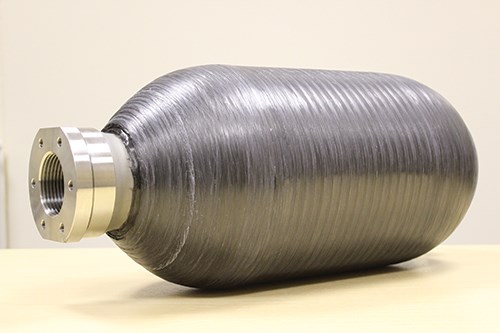 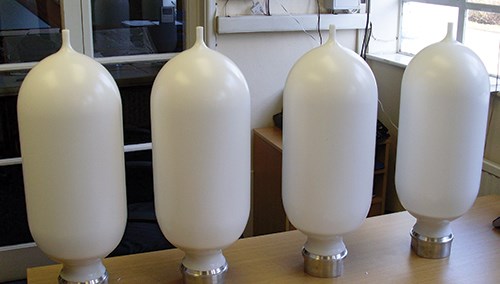 The DuraStor team designed a rotomolded acetal liner (four liners are pictured, each with gas ingress/egress hardware mounted at the bottom of the vessel) that is compatible with the overwound acetal/carbon fiber tape. Source: DuraStor Consortium

Most of the world’s automakers are scrambling to increase fuel efficiency and/or reduce greenhouse-gas emissions ahead of tough regulations that are phasing in between now and 2025. Toward that end, these OEMs are reducing vehicle mass and exploring alternative powertrains options (for a thorough rundown on automaker efforts to build more fuel-efficient, emissions-compliant vehicles, click on “Automotive CFRP: The shape of things to come,” under "Editor's Picks," at top right). One of the most intriguing of the latter is the fuel cell. Although major technical and logistical hurdles must be cleared before we see widespread deployment, fuel-cell vehicle (FCVs) are under development or already in road testing. Fuel-cell electric powetrains are of great interest because the only combustion byproducts of their two most common fuels- — hydrogen (H2) and compressed-natural gas (CNG) — are water and heat, making zero-emissions vehicles (ZEVs) possible.

One of the biggest hurdles is H2 fuel storage. H2 has been handled safely by industry for decades and can be produced locally, nearly anywhere, from diverse inputs (biomass, coal, geothermal, hydroelectric, nuclear, solar, wind, electrolysis of water, or even CNG). This flexibility is highly beneficial from a cost, energy security and lifecycle analysis standpoint. But this extremely light gas (14-times lighter than air) has three times more energy density by weight but far less energy by volume than conventional liquid petroleum fuels. Further, the hydrogen molecule is the world’s smallest, so permeation resistance of storage containers becomes a real concern, lest fuel leak out. It’s very difficult, therefore, to package H2 in the small spaces available in most cars in sufficient quantity to duplicate the 500 km-per-tank driving range of today’s petrol-powered cars, especially when the goal is to do this without boosting vehicle mass. Although there are alternatives (see “H2 storage methods,” under "Editor's Picks"), the most practical and least costly onboard H2 storage method is as a compressed gas at working pressures of 20-70 MPa in tanks that must test out to a burst strength of twice their rated pressure.

Today, four types of pressure vessel are available for H2 storage (see “Pressure vessels for alterative fuels, 2014-2023, under "Editor's Picks”). Type I (all-steel) containers are heavy and bulky. Type II tanks (steel or aluminum liners hoop-wound with carbon fiber/epoxy) are lighter but cost more. Each is capable of up to 30 MPa working pressures and used for bulk transport or stationary gas storage at refueling stations. Similar to Type II tanks, but fully wound with carbon/epoxy composite, Type III tanks are even lighter but more costly, withstand higher working pressures (to 82.5 MPa, with aluminum liners) and are primarily used for H2 or CNG storage on commercial trucks. Type IV tanks feature either high-density polyethylene (HDPE) or rubber liners fully overwrapped with carbon fiber/epoxy. The lightest but most costly, they offer performance similar to Type III tanks.

Unfortunately, certain metals and metal alloys tend to absorb H2, leading to embrittlement that reduces tank durability. And hybrid-material tanks are prone to fatigue at the mixed-material interface, which can limit useful life. Further, the epoxy matrix, a thermoset, complicates end-of-life reclamation, an added headache for automakers selling into the European Union. Generally, then, available tanks deliver insufficient weight-to-cost benefit, store too little fuel for adequate driving range, are difficult to recycle and/or lack sufficient durability for mass use on automobiles.

In 2010, a multi-partner, multi-year research program called Low Cost, Durable Thermoplastic Hydrogen Storage Tanks, or DuraStor, was formed to address these problems by investigating a drop-in replacement for Type IV tanks. Partially funded by Innovate UK (Swindon, Wiltshire, UK), DuraStor ended in early 2014, but a UK-only program called Hydrogen – Optimisation of Storage and Transfer (HOST) picked up where DuraStor left off in mid-2014, funded in part by the UK Technology Strategy Board, with the same charter and a few changes in members (for a list of consortium participants, see “Durastor/HOST participants,” under "Editor's Pikcs"). Members of both programs reportedly were chosen not only for their technical expertise but also their willingness and capability to form a viable supply chain should research lead to a commercial product.

After a market study yielded initial pressure vessel design specifications, the DuraStor team moved on to materials and processes. A patent survey showed that most intellectual property in this arena involved thermoset composites, but one team member familiar with the permeation resistance of inexpensive thermoplastic liner materials convinced the team to explore them, because they not only weigh less than metals but also process faster and offer greater impact strength and reprocessability/recyclability than thermosets. Further, thermoplastics can be remelted, offering the opportunity to produce liner and overwrap separately, then join them to create a monolithic tank that could avoid fatigue issues seen in existing metal/composite hybrids and facilitate recycling. By eliminating all metals except for coupling hardware, which could be isolated, hydrogen embrittlement and galvanic corrosion could be reduced or eliminated.

“In the lead up to these programs, we had many discussions with automakers who clearly were interested in fuel-cell technology, but lacked confidence in the long-term performance of current hydrogen-storage vessels,” explains Dr. Matthew Turner, head of R&D, EPL Composite Solutions Ltd., project lead for the DuraStor and HOST programs. “Our consortium members believe that thermoplastic composites can offer better durability than thermosets.”

DuraStor evaluated three semi-crystalline thermoplastic resins (supplied by consortium member Celanese, Dallas, TX, US) known for good mechanical properties and high chemical and permeation resistance: polybutylene terephthalate, polyphenylene sulfide, and polyoxymethylene (POM, or acetal). POM was chosen based on prior work by two team members and its long history of use in automotive fuel-handling components and low-pressure fuel storage. The liner would be neat POM to optimize permeation resistance, but the overwrap had to be reinforced to maximize the vessel’s hoop strength and burst- and puncture-resistance. The team selected continuous-strand carbon fiber rather than E-glass, because the former offers greater strength-to-weight and is already used, with epoxy, by many tank manufacturers. Unidirectional tapes, considered the most practical fiber form, ensured very low void content and no dry spots, both critical to permeation resistance.

Process selection began with the hollow liner. Because leakage was unacceptable, the team wanted to produce liners in one piece rather than join multiple parts. To manage costs, the process needed to be inexpensive at research volumes and scalable to automotive production volumes. Blowmolding, casting and rotomolding (rotational molding) were considered. The latter was selected based on its low tooling costs; its low forming stresses (which reduce post-mold warpage); its ability to produce large components with good surface finish and controlled wall thickness; and the fact that threads could be molded in for coupling hardware (which allows fuel flow in and out) and inserts could be used to minimize post-mold finishing. Although rotomolding cycles are slower than most other thermoplastic forming methods, family tools and use of rotary stations can increase output at a relatively low cost vs. other options.

Filament winding, already used by tank manufacturers, would be the overwrap process but the team would likely have to modify winding heads to handle preimpregnated thermoplastic tapes.

With materials and processes in hand, the team conducted parallel testing projects. Some members did small-scale mechanical testing (per ISO 527-3, ISO 178 and ASTM D3410M) and permeation testing (per ISO 5869) on neat, injection molded POM and vacuum/autoclave-cured POM/carbon laminates. Another group designed the liner, its coupling hardware and the rotomolding tool. Several liner designs were trialed between 2011 and 2013. Some molded liners from each batch were cut up and subjected to further mechanical and permeation testing. It was important to validate the accuracy of preliminary tests results — which were conducted on injection-molded samples with a POM grade and additive package designed for injection molding — by testing samples produced in the rotomolding process, using a similar but not identical POM grade with a different additive package. The correlation was quite good and the team concluded that formulation and processing differences didn’t adversely affect polymer behavior.

In 2014, the DuraStor team’s first public reports of its 2010-2013 research indicated that liner and overwrap materials meet or exceed current performance requirements as long as the liner’s nominal wall is ≥5 mm. Post-report work — a recycling study, additional liner molding trials and preliminary overwrap winding trials — has yielded data that will be used by the HOST team to finalize a winding path for the UD tapes. Next, research will focus on producing a monolithic vessel by consolidating the liner and overwrap. Other planned projects include modification of the filament-winding head and development of a drop-in/turnkey robotic manufacturing cell that would enable hybrid vessel manufacturers to adopt DuraStor technology. HOST will follow that with a real-world demonstration project on H2-powered FCVs to validate both material and process technologies and build a fully capable supply chain.

Hydrogen can be compressed and held under very high pressures, or liquefied and held at cryogenic temperatures. Compression and cryogenic refrigeration increase H2 energy density per unit of volume, but both are energy-intensive operations, and the vessels for both must be made of materials that can withstand high pressure and prevent hydrogen loss via permeation. The resulting robust containers don’t “package” well in commercial trucks, let alone on passenger cars. Further, the cryo option requires continuous energy input to keep hydrogen at -253°C. In the world of ground transportation, it’s impractical for any use other than large-scale H2 storage at vehicle refueling stations.

A third option would be quite welcome in automotive circles. It’s technically possible to store hydrogen in a solid state at, notably, room temperature and normal atmospheric pressure. The method involves absorption or adsorption of hydrogen into certain metal halides. This method, however, is fraught with challenges and remains commercially impractical.

For the present, auto OEMs are focusing on compressed hydrogen gas, which currently offer the best cost vs. benefit ratio and the fewest practical barriers
to implementation.