This blog is an online sidebar for the May 2020 feature, “Revolutionizing the composites cost paradigm, Part 2: Forming”, which discusses the RApid high-Performance Manufacturing (RAPM, pronounced “wrap-em”) program led by The Boeing Co. (Chicago, Ill., U.S.). RAPM is the “forming” part of DARPA’s Tailorable Feedstock and Forming (TFF) program to enable rapid, low-cost and agile manufacturing of small, complex-shaped composite parts.

Here, I simply wanted to provide some of the additional visuals and points for discussion that we didn’t have room for in the feature article. RAPM was split into three different material and process tracks: Resin infusion, thermoset prepreg and thermoplastic prepreg forming. We’ll follow that same division as we walk through some of the details of these parts forming trials here. 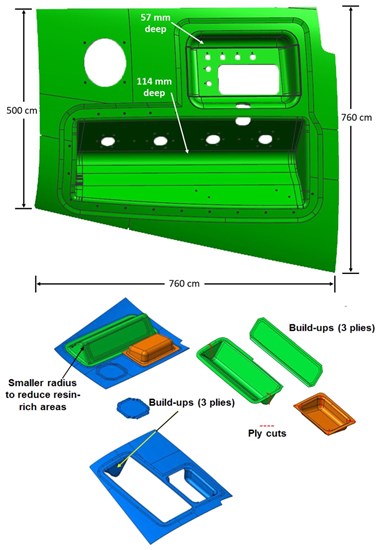 As explained in the feature article, after molding the pathfinder parts in the initial Manufacturing Development trials, RAPM moved on to the RI-RAPM-004 deep-draw, double-pan challenge part. The part’s geometry was inspired by an actual part for a production platform that is difficult to fabricate — a pan assembly with two deep-draw sections as well as pad-ups around the deep-draw sections and the access hole.

Improvements in preforming were developed to show a path toward more efficient manufacture using resin infusion/resin transfer molding (RTM) than is possible with the previous state of the art using prepreg layup.

The non-crimp fabric (NCF) preform for RI-RAPM-004 was broken up into multiple sub-elements: skin, deep-draw sections, and the build-ups around the machined access hole and deep-draw sections. All fabrics were 400 grams/square meter (gsm) ±45° biaxial, except for the build-ups, which were 154-gsm unidirectional (UD). Different ply layups were used for the elements to achieve the designed panel thicknesses.

Even with 12 different NCF preform elements, a 2/3 reduction in piece count was achieved versus 66 cut pieces for the current part using prepreg. RAPM estimates this also reduces labor for this part — which mostly comprises cutting and layup — by 90%. 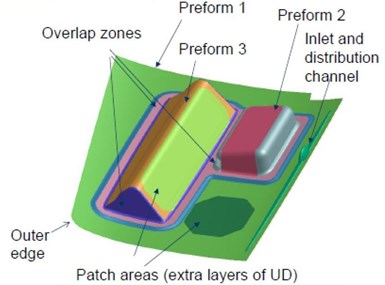 A model comprising the 12 preform elements was created for resin flowanalysis using low-pressure RTM (maximum 30 bar) to determine the optimum strategy for infusion, resin outlet positioning and flow channeling. The model assumed a fiber-volume fraction of 50% for base preform plies and 54.8% for pad-up plies.

The resin outlet was originally located in the center of the part’s bottom edge (see left image, below).  Flow modeling showed that at 95% resin filling, the resin flow path was headed to the lower right corner and there was a high likelihood of forming a dry spot along the bottom right of the part. “By moving the outlet to where the resin wanted to go, the chances for creating a dry spot could be greatly reduced,” explains Boeing technical fellow and RAPM principal investigator Tom Tsotsis.

Original resin outlet location (left) resulted in a resin flow pattern (right) with a high risk for creating a dry spot at the lower right. The solution proposed was to relocate the resin outlet to the predicted dry spot (right). SOURCE | Fig. 9 and Slide 8, “Fabrication of a Complex Part …” by Tsotsis, et. al. and Slide 14, “Process Modeling to Improve Tool Design and Part Quality for Resin Infusion” by Tsotsis.

As explained in the CW May 2020 feature on RAPM, flow modeling was performed by Huntsman (Basel, Switzerland) — supplier of the FAF2 two-part epoxy resin used —with PAM RTM software (ESI Group, Paris, France). For the RI-RAPM-004 part, flow modeling showed: 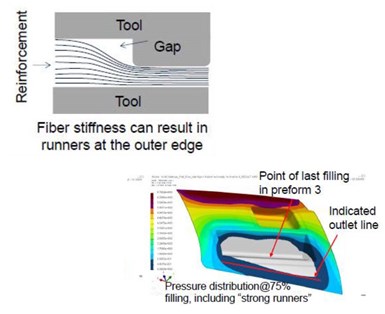 “Runners” are gaps between the preform and mold tool which allow resin to flow on top of the preform and affect racetracking during infusion. SOURCE | Slide 12, “Process Modeling to Improve Tool Design and Part Quality for Resin Infusion” by Tsotsis.

These results influenced both the part’s preform and tool design to make sure no dry spots occurred. With these modifications, flow modeling showed that the mold should be filled in 120 seconds with a flow rate of 10-40 grams/second at a maximum pressure of 30 bar and tool temperature of 130-150°C.

Note that initial resin infusion trials showed dry spots in the bottom of the rectangular deep-draw section, as well as fiber distortion near the resin outlet due to lifting of one of the skin preform stacks. To solve this, the resin inlet and outlet locations were reversed. Flow modeling confirmed this would work. 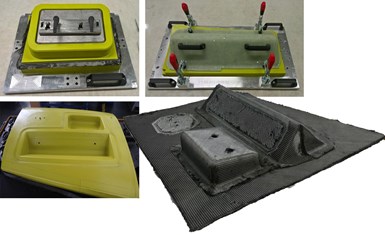 Preform tools for the rectangular and V-shaped deep-draw details (top left, right) produced the preform elements that were then assembled onto the full part preform tool (bottom left) and heat set into the final part preform (bottom right). SOURCE | Fig. 5, 11 and Slides 9, 13 from “Fabrication of a Complex Part …” by Tsotsis, et. al.

RI-RAPM-004 parts were made by SGL Composites (Ried im Innkreis, Austria). Preforms were shaped using low-cost tools made from polyurethane-based Raku-Tool from RAMPF Tooling Solutions (Grafenberg, Germany). These tools were very easy to mill and provided an extremely fine surface structure and excellent dimensional stability, with heat resistance up to 110°C, which was sufficient for heat-setting the preforms.

The rectangular and V-shaped deep-draw sections were each preformed to near-net shape by preheating and then pressing in their respective preforming tools. These details were then assembled using the full part preform tool. Though preforming was done by hand in RAPM, it could easily be automated for volume production.

The assembled preform was then loaded into the aluminum infusion tool. The preforming and infusion tools were designed to enable a robust yet cost-effective process. Modeling of the infusion tool’s thermal performance was completed before that tool was finalized and machined. Results showed the difference between hot and cold spots was within tolerance — 5.6°C for the top tool and 4.3°C for the bottom tool.

After infusion and initial cure at 130°C, all parts were post-cured at 180°C and then machined to net shape. Once process parameters were set, 10 parts were produced and sent to Boeing for evaluation. These parts were of similar or better quality vs. prepreg-based production parts.

The parts trials in RAPM’s resin infusion track demonstrated that this approach can be used to make high-quality parts for four different preform fabrics and two different resins.

Finished RI-RAPM-004 parts made by SGL Composites showed similar or better quality vs. prepreg-based production parts and were sent to Boeing for full evaluation. SOURCE | Fig. 13 and Slides 14, 15 from “Fabrication of a Complex Part …” by Tsotsis, et. al.

Most of the details for RAPM’s thermoset prepreg parts trials are presented in the main feature article and the blog/online sidebar “Novel prepreg for compression molding in RAPM”, including discussion of the spring-frame and double diaphragm forming (DDF) processes used. This track began with the manufacturing development parts shown below.

However, there was one achievement in this part of RAPM that deserves more detail here. It was explained that all three parts above were made using three different epoxy prepregs based on resins from Solvay Composite Materials (Alpharetta, Ga., U.S.):

As explained in the blog on EP2750, one of its characteristics optimized for compression molding is its fully impregnated nature versus CYCOM 5320-1, which is optimized for edge-breathing required in vacuum bag only OOA prepreg processing. CYCOM EP2750, although only slightly higher in resin content — 40% vs. 36% for CYCOM 5320-1 — better maintains hydrostatic pressure during compaction and cure in the matched metal tool cavity of press forming, reducing the risk for dry areas, inconsistent cured part thickness, wrinkles and poor surface finish. 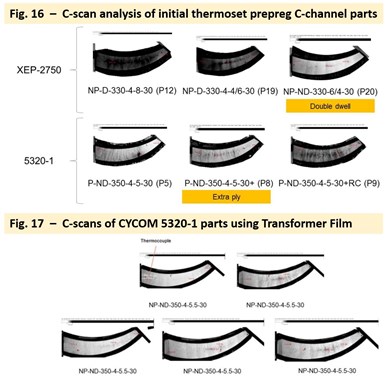 However, Solvay did develop a means for achieving the same results withCYCOM 5320-1. It is a patented Transformer Film, which is applied to the part layup prior to compression molding and increases resin content to maintain hydrostatic pressure during press forming. Initial TS-RAPM-003 curved C-channel parts made with CYCOM 5320-1 showed wrinkles, which also carried porosity. An extra ply of prepreg did reduce the magnitude of the wrinkles and porosity but did not eliminate them.

RAPM also used compression molding with thermoplastic composites. One of the first parts trialed in this track was the TP-RAPM-002 rib. It used a single-step process to mold a blank made from 12K carbon fiber reinforced polyetherketoneketone (PEKK) 12-inch wide unidirectional (UD) tape into a final-shaped part.

The tooling approach developed used a thin aluminum bladder that was pressurized with inert gas at high temperatures, expanding to apply even pressure to all of the part’s surfaces during stamping. This made it possible to maintain hydrostatic pressure horizontally against the part’s vertical flanges while using a press that lacked horizontal hydraulic system and controls and thus acted only in the vertical direction. 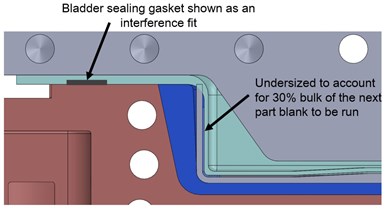 The aluminum bladder was milled from a single billet of 2024 aluminum and was undersized 30% from the final part thickness to accommodate the bulk of the thermoplastic unidirectional tape in the un-consolidated blank. Although the same bladder approach was used to consolidate the thermoplastic fabric prepreg blank for the TP-RAPM-003 curved C-channel, that bladder was made from magnesium and required super plastic forming. The aluminum bladder for the -002 ribs did not require super plastic forming.

The top and bottom steel tools were 410 stainless as were the removable inserts in the lower tool to facilitate part removal.  When the press cycle started, the upper tool with the aluminum bladder lowered to slowly press the bulk layup into the female cavity of the lower tool. This is where the additional 30% bulk factor in the aluminum bladder at room temperature was key to fitting the bulk layup into the tool without interference. The pressure applied by the bladder to the thermoplastic material was critical to achieve proper consolidation while it experienced a volume change and shrinking due to its coefficient of thermal expansion (CTE). That shrinking was overcome by the pressure the bladder applied normal to the horizontal and vertical surfaces of the part. 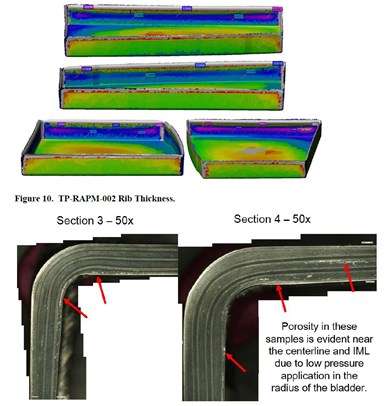 The parts produced using this method, however, showed both porosity and variations in cured part thickness. The bladder used with a vertical-only press (motion in only one axis) was very difficult to control. The forming experiments were successful in proving that a thin aluminum bladder can apply enough sustained pressure to consolidate a PEKK thermoplastic composite part with passable NDI results. However, the approach requires more analysis to be successful for this type of complex-geometry rib, which featured pad-ups in the center of the web as well as vertical flanges on all four sides.

The magnesium bladder tool used to consolidate the thermoplastic fabric prepreg blank for the TP-RAPM-003 curved C-channel was more successful. This process was completed using the Boeing St. Louis PtFS work cell, and is described in the online sidebar, “RAPM development of PtFS”. The consolidated blanks were then stamp formed by ATC Manufacturing to the final part shape. Those two processes used together overcame the limitations faced on the TP-RAPM-002 rib parts and showed that complex geometries are attainable with stamp forming for complex-shaped composite parts for which standard, one-step compression molding might not be possible.