Machine builder COMEC (Chieti, Italy), with the support of the composites R&D organization CETMA (Brindisi, Italy), has built composite isogrid structures using an innovative deposition technology. This was developed within the research project titled “Study of innovative product and process solutions based on the industrial use of advanced materials” funded by the Abruzzo region of Italy as part of the “POR FESR Abruzzo 2014-2020” program.

Isogrid structures are used in a variety of applications and configurations. These structures typically consist of an outer thin skin integrally connected to a reinforcing lattice. The repetition of reinforcing elements allows for an efficient distribution of loads, making it less sensitive to damage due to impact, delamination and the propagation of defects. When the grid has a triangular pattern, it has a mechanical behavior similar to that of an isotropic material. The design of an isogrid structure requires a hybrid mold consisting of an external aluminum part and an internal Teflon mold having the imprint of the isogrid structure on which to carry out the deposition of the not yet consolidated towpreg materials. The hybrid mold is necessary to have an optimal compaction of the towpreg layup — by exploiting the different coefficient of thermal expansion (CTE) of Teflon, while at the same time offering a rigid external aluminum containment structure. 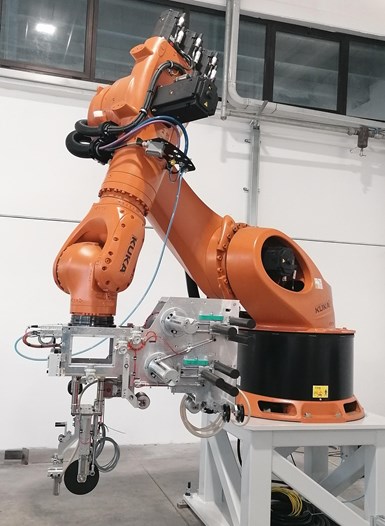 The deposition technology, developed by COMEC, is mainly composed of two elements, a six-axis robot and towpreg deposition head. The solution involves the use of an anthropomorphic robot with six degrees of freedom, three assigned to the arm for positioning operations of the deposition head connected to the wrist and three assigned to the wrist itself for the orientation of the head. The technology solution proposed for the deposition head inputs dry tow, which is then impregnated with resin through an in-line system. The impregnation takes place inside the deposition head, by integrating a unit that allows the fibers to be wet with the resin in-situ. The in-line impregnation system reduces costs — the semi-finished product costs more than the dry reinforcement used here, and also requires frozen/cold storage, not required by dry fiber materials. 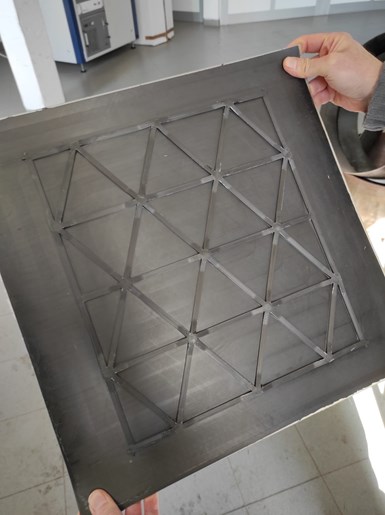 After the deposition of towpreg layers in the Teflon mold, CETMA carried out the consolidation process, using the external aluminum mold in a hot press. The cycle of polymerization depends on the resin used for the towpreg. In this case, the resin is epoxy and the complete polymerization needs a temperature of 120°C.

Isogrid structures made using composites represent a potentially attractive alternative to sandwich structures used in hostile environments. Their flexible configuration enables high-performance applications in a variety of industries. Thanks to the versatility of the impregnation machine developed by COMEC, which can be used with practically any fiber/matrix combination, isogrid structures with different composite materials can be readily produced.

CETMA was pleased to support this development, and the COMEC R&D team valued CETMA’s contributions to this project: “The collaboration with CETMA has allowed the growth of the know-how and the consolidation of an increasingly strong partnership aimed at innovation.”