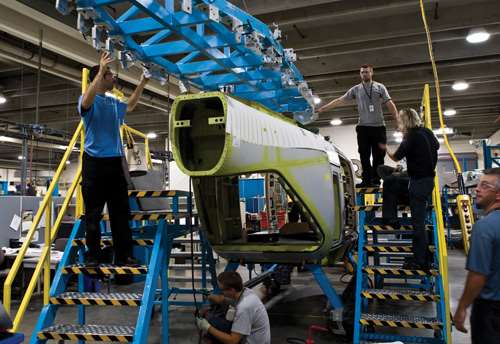 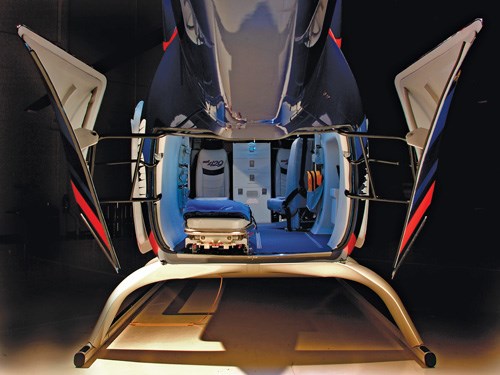 The 429's 130 ft3/3.7m3 open cabin, with a flat floor and large doors and windows, can be reconfigured easily for maximum mission flexibility. Source: Bell Helicopter Textron 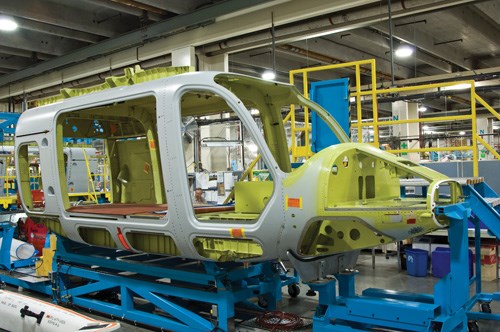 The 429 uses a metallic backbone/skeleton, which efficiently conducts lightning strike electricity through and out of the airframe. The skeleton is clad with lightweight composite cowlings, panels and other structures, producing a 20 percent overall weight savings. Source: Bell Helicopter Textron 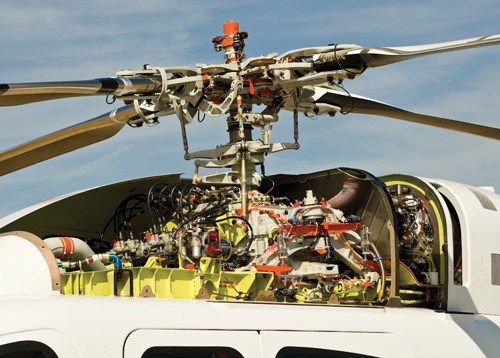 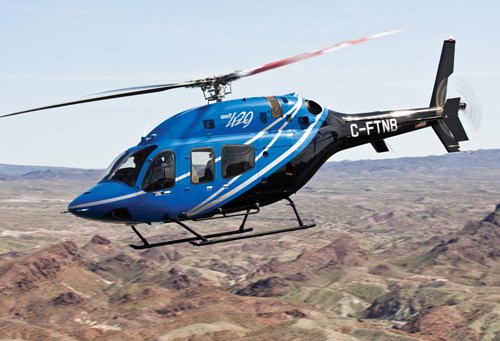 Bell Helicopter’s (Ft. Worth, Texas) model 429 meets demand for an updated single-pilot medevac vehicle with a larger, open cabin (see photo below). Composites were an enabling technology as Bell achieved a 20 percent weight reduction and a 40 percent shorter cycle time than the model it replaces. Source: Bell Helicopter Textron

The emergency medical services (EMS) industry has long desired an updated single-pilot “medevac” helicopter that would improve on those currently in service. The wish list has included a larger, more open cabin to improve mission flexibility as well as better operability, greater stability and safety performance, but also lower acquisition and operating costs. Bell Helicopter Textron (Ft. Worth, Texas) initially responded in 2004 with its 427 model, but it fell short in cabin size and did not always satisfy EMS operability/flexibility needs. Bell replaced the 427 with its model 429 that, on the eve of its launch into active service, promises to meet its customers’ needs on the strength of Bell’s modular assembly process.

Application of this modular technology represents a design/manufacturing paradigm shift that has resulted in a high-performance twin-engine helicopter that delivers the large cabin, mission flexibility and safety of an intermediate-class helicopter, but with the speed, lightweight and lower cost of a light-class rotorcraft. The 130 ft³/3.7m³ open cabin, with a flat floor and large doors and windows, can be reconfigured easily for maximum mission flexibility, while the advanced composite rotor blade design and Bell’s first use of an all-composite tail boom contribute to the performance, safety and lower operating costs required by medevac operators.

The modular assembly process, used globally on the 429, entails outfitting modules completely prior to assembling them with the rest of the airframe. For example, in the floor module, all of the subsystems are installed first, including fuel tanks, wiring and controls, before it is integrated into the rest of the airframe. This approach has eliminated the difficulty of fitting and mating parts, which previously required significant rework. All of the 429 tooling was adapted to enable this modular assembly, which reduced overall cycle time by 40 percent. The parts fit so well — and so much better than on previous designs — that minimum shimming was required and, Bell reports, none of the design team’s anticipated part-fit issues ever materialized. That fact changed the dynamics of the manufacturing process: the build team was actually ahead of the engineering team.

Bell credits this success, in part, to the use of CATIA 3D (Dassault Systèmes, Paris, France), which enabled very precise control of all mating surfaces, dramatically improving the ability to maintain tight tolerances. But other key components that contributed to excellent part fit were the use of composites and significant consolidation of parts, both composite and metal.

Safety up, cost down

These factors proved particularly effective in the 429 tail boom. According to Guy Lambert, chief engineer for the Bell 429 program, the drivers behind composites use in the tail were EMS operator concerns about weight, cost and safety, the latter underscored by the U.S. Federal Aviation Admin.’s (FAA) more stringent “flaw-tolerance” fatigue-resistance requirements (see the sidebar posted below this article). “The actual cost of composite raw materials is higher than raw aluminum sheet metal, and simple aluminum monocoque construction, using aluminum tubing as the structural framework, is hard to beat weight-wise,” Lambert acknowledges. However, with the advent of tougher FAA standards, the need to prevent stress cracks that might lead to structural failure has rewritten the cost/performance equation.

“The FAA flaw tolerance requirements, in contrast to the previous ‘safe life’ approach to airframe certification, now force the aluminum skins to be so thick that aluminum is no longer favorable,” says Lambert. Further, Lambert notes that the metal-forming processes used in helicopter construction, including tooling for stretch-forming sheet aluminum skins, are actually quite expensive. These factors combined to make practical the replacement of multiple, expensive sheet metal parts with larger, integrated composite structures, which achieved the dramatic improvements in assembly fit and cycle time and also enabled the 429 to meet its critical weight and safety requirements.

This also drove the use of composites in the 429’s cowlings, sidebody and fuselage skins. Thus, the 429 design features a metallic backbone/skeleton — which performs more efficiently than composites in conducting electricity from lightning strikes through and out of the airframe — clad with lightweight composites, producing an overall weight savings of roughly 20 percent.

Meanwhile, the composite tail boom is a two-piece assembly, fabricated from carbon fiber skins and HRH-36 honeycomb core, the latter made by Hexcel (Dublin, Calif.), using Kevlar paper (DuPont Advanced Fiber Systems, Wilmington, Del.) and phenolic resin. It is a monocoque; that is, it has no longeron (i.e., longitudinal stringer) and only a minimal number of frames: two to handle loads from the horizontal stabilizer, two partial frames to support the tail-rotor driveshaft, and a ring frame at the interface with the cabin. A tetrahedral aluminum casting at the rear tip supports the tail-rotor gearbox and vertical fin. The two carbon/honeycomb-cored skins are riveted onto this rear casting and along the seam line. At this rear casting, the tail boom measures 10 inches by 10 inches (25.4 mm by 25.4 mm), broadening along its 10.5-ft/3.2m length to 27 inches by 20 inches (686 mm by 508 mm) at the forward end, which mates with the cabin.

In line with its modular assembly process, Bell also developed its low-cost single-cure blade concept. Although Bell’s previous composite blade designs have been very successful in service, they had room for improvement in other respects. The modular assembly design team was tasked with developing a blade design that would have lower recurring cost, shorter development time, and greater design flexibility than previous designs. The approach they developed broke new ground for Bell and paved the way for the 429 blade design.

One of the key differentiating elements of the 429 design is its integrated spar. In previous Bell blades, the skins and spars were molded and cured separately, then joined secondarily. The 429’s unidirectional fiberglass/epoxy spar structure is fiber-placed onto the blade skins, using a MAG Industrial Automated Systems (Hebron, Ky.) Viper 1200 fiber placement system, and cocured with the blade assembly. This eliminates the spar tooling, the separate spar cure cycle and all associated tool-development and production costs. Using fiber placement for the spar also enables greater design optimization and flexibility by placing material more precisely and only in needed locations.

Also new in the 429 blade design are its carbon/epoxy skins. Earlier Bell blades employed fiberglass/epoxy skins due to their damage tolerance and benign failure modes. However, newer toughened epoxies have improved the fatigue resistance and failure modes of carbon/epoxy combinations, permitting Bell to take advantage of the lower structural weight.

For the same reasons, fiber-placed carbon/epoxy is incorporated into the 429 main rotor yoke. The yoke design alternates fiber-placed unidirectional carbon material with off-axis and unidirectional broadgoods to produce a flapping flexure yoke similar to that used in the model 407 helicopter, except that the 429 yoke’s flapping capability is greater, which helps to accommodate higher speed and equates to longer life in service. The increased flapping capability on the 429 yoke was achieved through a combination of design optimization via improved analysis capability (higher fidelity finite-element models), toughened-epoxy fiberglass material, and the placement of adhesive layers at critical ply terminations. The carbon/epoxy and fiberglass/epoxy materials used in the yoke were supplied by Cytec.

Also new to Bell blade design is the use of closed-cell foam in the afterbody, the key aerodynamic structure aft of the spar that gives the blade its lift. ROHACELL foam made by Evonik Degussa (Essen, Germany) was used to counteract internal pressures during the blade’s single-cure cycle. Bell was comfortable with this change in materials because closed-cell foam has a proven track record through decades of service in other rotor blade applications, including the V-22 Osprey tiltrotor craft and some Eurocopter models.

Certification of the Bell 429 was completed in June and the first aircraft was delivered in July, which, after extensive EMS customization, will enter service in Des Moines, Iowa, flying for Mercy One and Mitsui Bussan Aerospace Corp. (Irving, Texas), a development partner along with Korea Aerospace Industries (KAI, Seoul, Korea). The 429 has attracted more than 300 letters of intent, with 60 percent of these customers overseas, and 25 units are reportedly in production at the company’s plant in Mirabel, Quebec, Canada.

Bell, however, continues to pursue ways that composites can further reduce its manufacturing costs. The company participates in the Consortium in Research and Innovation in Aerospace in Quebec (CRIAQ), a program aimed at assessing the maturity level of new composite technologies that have the potential to reduce cost. One is a thermoplastic tail boom concept demonstrator. Lambert, who also serves as chairman of the CRIAQ board, points out that in this case, there is no weight benefit to be gained — the research is driven purely by the need to reduce manufacturing costs. Another avenue for investigation is an out-of-autoclave program to demonstrate composite airframe manufacturing and bond assembly processing. Bell is pursuing this line of research, Lambert says, “because the use of autoclaves is very expensive, especially for BMI resin, which has postcure requirements that tie up capital equipment for significant time periods.” He adds that Bell also wants to research ways to reduce the labor and time involved in hand lay-up of prepreg.

Subject to extreme levels of fatigue, helicopter airframes now must be certified to flaw tolerance requirements. According to Federal Aviation Regulation (FAR), Part 29, Section 29.571, “Parts to be evaluated include, but are not limited to, rotors, rotor drive systems between the engines and rotor hubs, controls, fuselage, fixed and movable control surfaces, engine and transmission mountings, landing gear, and their related primary attachments.” Unlike previous “safe life” qualification procedures, flaw-tolerance certification requires that test engineers introduce flaws into airframe structures and then perform loaded fatigue testing to demonstrate that flaw growth will not result in failure for at least two inspection intervals or that there will be no flaw growth at all.

"The main difference is that we are demonstrating through fatigue testing that any barely visible damage on the composite tail boom (e.g., a tail boom skin hit by a rock) will not result in a fatigue failure,” says Guy Lambert, chief engineer for the Bell 429 program. “The safe life approach had no such requirement.”

Defects must be of three types:

All of these damage scenarios are then subjected to testing that simulates the ground-air-ground fatigue cycles the structural component will see in a 25,000-hour service life, based on flight-test data.