Lanxess extends use of composites to extrusion blow molding

The process demonstrates its capabilities to boost the mechanical performance of blow-molded components in high-stress areas.

Lanxess AG (Cologne, Germany) announced on Sept. 3 that it is expanding its range of applications to extrusion blow molding, which will include the integration of Tepex continuous fiber-reinforced thermoplastic composites into the production process.

In a recent feasibility study, Lanxess says it demonstrated that components made of PA6 can be manufactured with blow molding technology while receiving local reinforcement with Tepex at points subject to heavy loads. The investigations were said to be performed on a close-to-production blow molding machine at the technical center of the High Performance Materials business unit (HPM) in Dormagen, Germany. “The components show an outstanding adhesion, which allows utilization of Tepex’s strength and rigidity,” explains Arthur Rieb, blow molding specialist at HPM.

According to Lanxess, the process can be used to locally boost the mechanical performance of blow-molded components, for instance in areas that are subject to high mechanical stress due to impact loads or high pressure. “In addition, it is suitable for the manufacture of blow-molded structural components, like the hollow sections for car body reinforcement. Extensive use of Tepex can be a key factor in reducing weight and material use because the basic wall thickness of the component can be decreased,” Rieb explains. “Based purely on thermoplastic systems, the hollow parts are easy to recycle, thus making it easier to establish closed-loop material cycles.”

When manufacturing such hollow parts, says Lanxess, the first step is extruding a tubular parison while a heated and plasticized Tepex insert is simultaneously placed in the blow molding tool. The parison is then inflated in the tool, which also forms the Tepex section. This results in a component with a defined shape and local Tepex reinforcement. “The forming of Tepex is integrated in the blow molding process, resulting in a one-step process with short, economically efficient cycle times that are typical of blow molding,” adds Rieb.

Previously, says Lanxess, manufacturing components of this kind involved a three-step process with the subsequent welding of a two- or three-dimensional Tepex insert onto the blow-molded hollow part.

“Our process makes things much simpler,” says Tilmann Sontag, expert in lightweight design at HPM’s Tepex automotive group. “In addition, the fabric reinforcement makes the plasticized Tepex material much easier to handle than tapes that are unidirectionally reinforced with continuous fibers. This enables a stable and safe production process.” 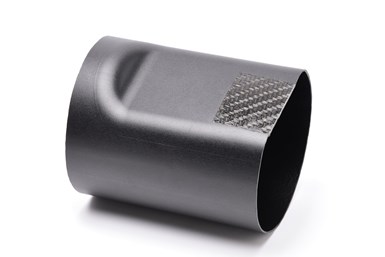 Thanks to the good adhesion between the blow molding material and Tepex, a material bond is created in which Tepex can fully exploit its strengths in terms of strength and stiffness. Photo Credit: Lanxess AG

Further, as the continuous fibers in Tepex are fully pre-impregnated with plastic, the process is highly sufficient to consolidate the material so no air pockets form during the blow molding. “The result is a material bond with excellent adhesion between the blow molding material and Tepex. Even low blow molding pressures are enough to form Tepex into critical 3D geometries such as hemispheres with tight radii,” explains Sontag.

According to the company, its HPM business unit has developed a wide product range of high-viscosity compounds based on PA6 and PA66 with and without glass fiber reinforcement, materials that can also be used for the new process/material combination. For instance, the range is said to include soft, impact-resistant product variants such as the unreinforced PA6 compounds Durethan BC700HTS DUSXBL and Durethan BC550Z DUSXBL. Lanxess notes that materials of this kind are suitable for Tepex-reinforced tanks or other hollow parts where the application also requires, for example, high impact resistance and flexibility. By contrast, the glass fiber-reinforced product types tend to be the material of choice for lightweight structural components.

With Tepex, too, a wide range of product types are available for the process — for instance, material variants that are reinforced with continuous fiber fabrics or laminates made of glass, aramid or carbon fibers. The matrix of composites is also capable of variation. In addition to PA6 or PA66, for instance, it can also consist of polyolefins such as polypropylene or polyethylene.

To support customers at all stages of component development, the Lanxess HPM business unit has combined its expertise in material, application, procedural and technological development under the brand HiAnt. The service is said to encompass everything from concept design, material optimization and the calculation of component characteristics by means of simulation tools, to processing, component testing and the start of series production.