Culmination of a three-year project with AMRC which focused on creating stabilized, near-net shape preforms of variable thickness with efficient material use for aerospace and automotive.
#weaving

Martin Wood, weaving director at Antich and Sons, pictured with one of the single rapier weaving looms used to create 3D-woven multilayer textiles. Martin is arguably one of the most experienced weaving experts in the country having spent his entire career working on the technical side of weaving. All photo credit: Antich & Sons, AMRC.

Antich and Sons’ advanced capability is the culmination of FABFORM, a three-year project undertaken with the AMRC and funded by Innovate UK, which focused on developing the additional methods needed to create stabilized, near-net shape preforms of variable thickness. These preforms will reportedly enable efficient use of material within a component, ensure the correct size and shape to drop into molds used for injection of composite matrix resin, as well as facilitate an easier and more robust handling and transport.

The company’s head of research and development, Andy Smith, says developments in the stabilizing and trimming of 3D-woven carbon fiber preforms with uniform and variable thicknesses is a significant achievement for the Huddersfield-based company, moving it beyond the current state-of-the-art manufacturing capabilities. 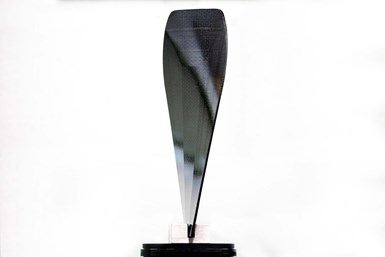 The demonstrator part produced by Antich and Sons which represents a step change in its manufacturing capability.

“The variable thickness, stabilization and trimming methods developed for 3D-woven materials in FABFORM allow a significant step up the value chain,” says Smith. “It takes Antich from a weaver of fabric to a manufacturer of advanced composite preforms ready for the next step in the manufacturing process.”

Smith notes that development of key processes necessary to transform 3D-woven fabrics into ‘mold ready’ preforms is still immature in the U.K. supply chain. He says the new developments by Antich and Sons bring great value to the market by advancing manufacturing technologies, improving product performance and streamlining production capabilities.

“In the past, 3D-woven preforms were hard work to prepare for molding operations and were also liable to deterioration when handled and cut,” says Smith. “Therefore, we felt it was crucial that, as a weaver, we developed the technology both during and post-weaving to supply finished, stable preforms which can be easily utilized by end users.

“The ability to access the world-class facilities at the University of Sheffield AMRC was a major help in taking a scientific approach to assessing, down-selecting and testing the right technologies as well as developing the processes on industrial scale, high-tech equipment.”

Chris McHugh, dry fiber development manager at the AMRC Composite Centre, says the developments achieved through FABFORM support the creation of more competitive products that are lighter, stiffer and stronger, as well as helping diversify income streams, creating new jobs and increasing the skills base in composites.

He adds: “The collaboration between the AMRC and Antich and Sons has utilized the combined advanced technologies and experience available to advance 3D weaving preforming capabilities for U.K. manufacturing. The outputs from the project have the potential to generate significant new business and strong exports for the U.K., in cross sector high-value manufacturing applications including the strong export markets in automotive and aerospace.”

Smith says FABFORM has been “an excellent first step” in incorporating key technologies such as thickness tapering, stabilization and edge trimming that mechanically convert 3D fabric into a useable preform for a composite molding operation.

He says the know-how of this project has been developed by investigating various preform stabilization techniques and quantitatively assessing their performance through multiple test methods such as edge fraying tests and picture frame shear tests, to name a few. This was followed by the comparison of a wide range of trimming methods of the preforms including laser, water jet cutting and ultrasonic methods.

“The capability to supply advanced and ready-to-go preforms opens up new avenues for the development of alternative structural and complex materials on the U.K. market, enabling the creation of more competitive products,” Smith adds. “Future opportunities in markets such as renewables (wind turbine blades), rail (body structure), industrial processing and defense will provide long-term benefits for the wider U.K. composite sector.”

With more than ten years’ expertise in composite research and development, in areas like polymer matrix composites (PMC) and aluminium matrix composites (AMC), Antich and Sons says it continues to drive the business forward into new applications for its weaving technology.

The company has acquired a single rapier 3D-weaving machine from Lindauer Dornier GmbH (Lindau, Germany), including a Horizontal Take-Off (HTO) platform which is said to be the first of its kind in the U.K. This HTO platform enables a continuous draw of fabric off the machine in a straight horizontal configuration, instead of around a roller, which is key to avoid distortion with thick fabrics, and forms the basis for layer separation techniques that facilitate variable thickness, the company says. Capability for resin transfer molding (RTM) of prototypes has also been added to speed up development cycles.

Antich and Sons intend to exhibit at Advanced Engineering and JEC World when the conferences return.