CompositesWorld was at SAMPE 2019 and offers a summary of highlights from the show and conference.
#windblades #workforcedevelopment #777x

SAMPE 2019 was held in Charlotte, N.C., U.S., which represented the event’s first foray to that city. CompositesWorld was there and offers this summary of highlights from the show and conference. 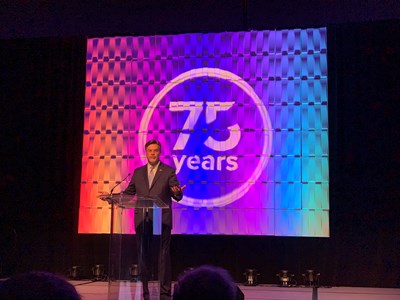 Boeing keynote. SAMPE kicked off with a keynote from Dr. Greg Hyslop, chief technology officer for the Boeing Co. (Chicago, Ill., U.S.). His presentation focused on the future of advanced materials and highlighted the importance of collaboration and the willingness to share information and ideas. He touched on some of Boeing’s programs starting with the 777X, which features the largest carbon fiber wing ever made. The aircraft will begin flight testing later this year. Once in service, the 777X will, said Hyslop, enable continuous flight between any two points on Earth. Hyslop touted the success of the composites-intensive 787 Dreamliner, which he says has saved more than 20 billion pounds of fuel since its introduction and is shaping the thinking of the company as it moves forward.

Boeing’s programs beyond commercial aircraft include the Echo Voyager autonomous submersible, the T-X U.S. Air Force trainer, the MQ-25 unmanned tanker (which will reportedly have its first flight at the end of the summer) and the XS-P Phantom Express reusable spaceplane, designed for the Defense Advanced Research Projects Agency (DARPA, Arlington County, Va., U.S.), which features a composite cryotank designed to reduce tank weight by 40%.

Hyslop discussed ways in which Boeing is working to address the growing problem of ground-based traffic and congestion, and an increasingly crowded airspace. He discussed the Boeing NeXt program, which is aimed at urban, regional and global mobility. In addition, in 2017 Boeing acquired Aurora Flight Sciences (Manassas, Va., U.S.), which has been working on an air taxi program. Meanwhile Boeing is partnering with Aerion (Reno, Nev., U.S.) on supersonic travel.

During a Q&A session after the talk, when asked about the future of aluminum use in fuselage structures, Hyslop admitted that aluminum still has a significant role to play in aircraft fuselages, but reiterated the significant role that composites play — and will continue to play. He described the company’s approach to materials as “holistic.” 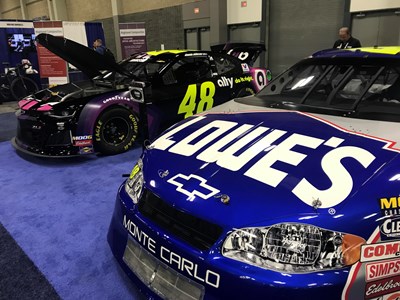 NASCAR’s composites evolution. Jeff Andrews, director of engine operations at Hendrick Motorsports (Charlotte, N.C., U.S.), gave a presentation on the evolution of composites in NASCAR. Currently the sport puts an emphasis on composites use for components mounted higher in the vehicle, aiming for weight savings and achieving a lower center of gravity. Composites are used in such components as gear cooler ducting, brake ducts, battery cases and components high on the engine. Current body components include the front fascia, hood, rear deck lid and rear fascia, but Andrews expects that “implementation of all-composite bodies is in the very near future” for NASCAR, indicating that it could happen within 2-4 years. As proposed, a full composite body system would provide for a more consistent surface over the length of the vehicle with the desire of streamlining vehicle build times. 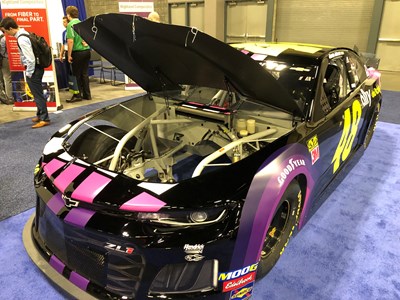 On display on the SAMPE show floor were two NASCAR racecars. Both were built by Hendricks Racing for Jimmie Johnson: his 2019 car (purple) next to his 2002 car (his first). The 2019 car has 35% more carbon fiber on it than the 2002 car, which had a few carbon ducts but was almost entirely metal. The 2019 car has a carbon fiber hood, part of the nose, trunk, seat, bumpers and some small parts. The largest carbon fiber part is the seat.

Huntsman adhesive launch. The most prominent product announcement at SAMPE was made by Huntsman Advanced Materials (The Woodlands, Texas, U.S.), which introduced four products. Epocast 1649-1 FST A/B is an Airbus-qualified adhesive and void filler — a low-density, fast-cure paste that can be mixed and applied manually with a 2:1 mix ratio or used in a dual-barrel cartridge with static mixer. It’s designed for insert potting, ditch potting, edge filling and honeycomb reinforcement. Epocast 1648 A/B is a Boeing-qualified (BMS 5-28, Type 18, Class 1) adhesive and void filler. It is a low-density, flame-retardant, thixotropic compound designed for use with honeycomb structures. It can be dispensed via meter mix or cartridge and sets quickly at room temperature. Applications include ditch and pot forming, core reinforcement and edge filling/sealing.

New to the Araldite acrylate adhesive line are Araldite 2050 and Araldite 2051, and both are designed for use in “extreme” conditions. The 2050 product (designed for “cold and wet”) is said to be ultrafast-curing from -20°C to 25°C without additional heat and can be applied under water or in humid areas. It requires no surface preparation and provides what is said to be outstanding adhesion on dissimilar substrates. It’s temperature-resistant up to 120°C. Araldite 2051 (designed for “warm and humid”) is fast-curing from 0°C to 40°C, also can be applied under water and also is temperature-resistant up to 120°C. Both products are targeted toward wind blade and marine repair applications. 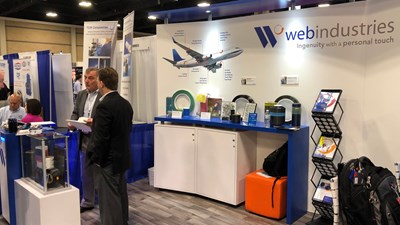 Web in Seattle. Web Industries (Marlborough, Mass., U.S.) announced at SAMPE that it is building a new facility in Marysville, Wash., U.S. (near Seattle), that will provide tape slitting and winding services, as well as ply cutting and kitting, off-angle/off-axis tape production, and research and development services. The new facility will supply slit tape for the Boeing 777X and position the company to provide responsive formatting services to other businesses in the region, Web officials said. Web will break ground on the 85,000-square-foot plant in 2019 and plans to begin operations in 2021.

Materials Forecast Forum. SAMPE 2019 featured a conference track based on SAMPE’s Materials Forecast Forum, which was conducted by SAMPE North America during 2018. Timed with SAMPE’s 75th anniversary, the study involved representatives from OEMs, government organizations, academia, research facilities and young professionals and was aimed at gaining insight into what the materials community might look like in the future. This year’s conference included panels directed at taking the next steps toward that future. Topics covered included future mechanisms for R&D funding and future engineering workforce development, as well as assessment of materials for renewable energy, increasing efficiency of CO2-emitting systems and biodegradable materials, and the Materials Genome Initiative, a multi-agency initiative aimed at providing resources and implementing policy to reduce the cost and development time of advanced materials. 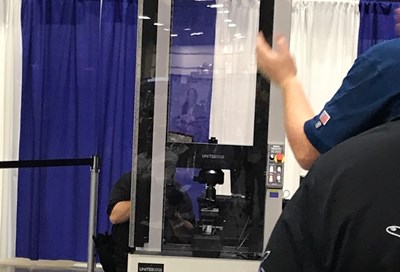