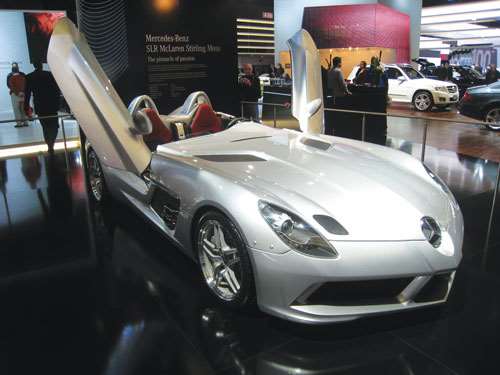 Despite the global slump in auto sales and ongoing financial crisis, the 2009 North American International Auto Show (NAIAS), held Jan. 17-25 at the Cobo Conference/Exhibition Center in Detroit, Mich., once again served as the leading showcase for production and concept vehicle introductions from domestic and international OEMs. While the overall mood of the show was definitely understated by comparison with recent years, the majority of automakers elected to exhibit, with Nissan the most notable exception among the major OEMs. Notably, the number of vehicle introductions and the advancements they showcased continued apace, especially with respect to alternative power trains.

Forthcoming hybrids and electrics from the major OEMs attracted plenty of interest, including Toyota’s third generation Prius and the 2010 Chevrolet Volt from General Motors. But two smaller entrants are closer to supplying such vehicles to the public at large. Startup Fiskers Automotive (Lake Forest, Calif.) displayed its 2010 model Karma plug-in four-door hybrid, which is capable of running 50 miles/80.5 km on a single overnight charge of its lithium-ion batteries and more than 300 miles/482.8 km when using the 2.0-liter gasoline engine to power an onboard generator. Priced from $88,000 to $106,000 (USD), depending on options, the Karma is slated to enter production late this year at volumes of approximately 20,000 per year. The company stated that the body panels are a combination of aluminum and composite but was not specific about which parts are the latter. Across from the Fiskers display was the Tesla Roadster exhibit, inclusive of a bare aluminum chassis and a complete vehicle. The all-electric sports car, built by Tesla Motors (San Carlos, Calif.), should hit the market later this year, featuring carbon fiber in many of the composite body panels (see “Learn More”). Tesla also announced at the show that it will supply batteries to Mercedes for a planned electric version of the smart car.

In conjunction with the event, the Automotive Composites Alliance (ACA, Arlington, Va.) showed its continued support for the industry by hosting a daylong reception at a venue adjacent to Cobo Hall, featuring composite components and the chance to learn more about the materials and methods used to produce them. Noting that virtually every automaker at the show was featuring hybrid gasoline/electric vehicles, the ACA sharpened its message about how composites can make these vehicles lighter, thereby extending their range. Although most of the hybrids introduced at the show are based on current steel platforms, ACA chairman Mike Dettre of AOC LLC (Collierville, Tenn.) sees increasing opportunities for composites down the road as OEMs look to differentiate their offerings with further improvements in efficiency, which will make mass reduction a priority. “There’s never been a better time to incorporate composites in new vehicles with new power trains,” Dettre notes. “OEMs are limited to making vehicles smaller or using lighter weight materials.”

As an example of the ways that suppliers are working to make this a reality, AOC demonstrated extensions of its Tough Class A (TCA) resin technology into lower-density exterior SMC panels. Standard TCA panels have a specific gravity of 1.9, but new formulations that replace heavy calcium carbonate filler with hollow glass microspheres or higher resin content can achieve a specific gravity of 1.3, offering mass savings of up to 50 percent vs. steel. The low-density formulation can be molded at 500 psi, rather than the 1,000 to 2,000 psi for standard formulations, opening opportunities for lower-cost tooling. In addition, the latest versions of the base resin now include up to 25 percent of a byproduct from bio-diesel production. Because the glass microspheres in the formulation could make surface porosity a problem during paint prep, the use of an in-mold coating is recommended to provide a surface suitable for sanding. Dettre believes that the industry  will see the first low-density SMC applications occurring in heavy-truck exteriors body panels.

ACA vice-chair Dan Dowdall, of molder Meridian Automotive Systems (Allen Park, Mich.), sees today’s financial crisis as an opportunity because of the low investment costs associated with composites. In the case of closure panels (doors, deck lids and hoods), Dowdall says Meridian can offer SMC parts with a 1.6 density outer skin and a 1.3 density inner panel, making it the same weight as aluminum at a fraction of the tooling cost. He notes that the downturn in the automotive industry has led Meridian to explore other markets for the technologies they have been developing during the last five years, such as UV-stable SMC as well as SMC formulas with improved flammability resistance and antimicrobial characteristics for construction applications.

As an eye-catching material, there is still considerable interest among automakers outside the U.S. in carbon fiber. A lot of it was on display at the show, particularly in trim components and interior embellishments. The Mercedes SL65AMG Black Series Coupe sported a woven carbon front splitter and rear diffuser, and the Audi R-8 featured a woven carbon fiber “sideblade,” with both vehicles having extensive use of the material on the interior. BMW’s venerable M3 continues with the carbon fiber roof, produced internally via the resin transfer molding (RTM) process. Vehicles with critical carbon fiber content in the chassis on display included the Bugatti Veyron, the Lamborghini Murcielago and a Stirling Moss special edition Mercedes SLR McLaren roadster, with a 641-hp engine and a top speed of 218 mph/350 kmh. Only 75 of the latter will be built for public sale.

While the mood at the show might have been more reserved than in years past, AOC’s Dettre maintains a positive outlook. “The ACA member companies have always been responsive to the OEMs,” he points out. “As they go through the process of redefining their wants and needs, we’ll be there to bring solutions to the table to help them.”