How much is that composite wing in the window?

One wing of the Airbus A220 at the Bombardier Belfast facility. This infused structure uses Solvay resins and Teijin’s TENAX carbon fibers. Source| Teijin

Spirit AeroSystems (Wichita, Kan., U.S.) announced on Oct. 31 that it had entered into a definitive agreement to acquire select assets of Bombardier (Montreal, Quebec, Canada) aerostructures and aftermarket services businesses in Belfast, Northern Ireland; Casablanca, Morocco; and Dallas, Texas, U.S., for cash consideration of $500 million. The acquired Bombardier operations to be acquired (the deal will likely close in early 2020) employ more than 4,000 people at three sites comprising approximately 3.4 million square feet. The backlog of work includes long-term contracts for the Airbus A220 and A320neo, along with Bombardier business and regional jets. Perhaps most significantly, the acquisition includes Bombardier’s A220 composite wing fabrication operations in Belfast.

I will discuss why this is important, but first, a little refresher. Bombardier’s commercial aircraft division spent much of the mid-2000s developing the CSeries aircraft, a single-aisle jet that was delivered in two configurations — one with a range of 3,400 nautical miles and 100-120 capacity, and one with a range of 3,350 nautical miles and 120-150 capacity. As soon as the plane was introduced, however, it ran into problems, mainly in the form of objections from Boeing, which filed a trade complaint in 2017, alleging that the subsidies provided to Bombardier by the Canadian government gave Bombardier an unfair advantage with the CSeries in the single-aisle market. Although the U.S. International Trade Commission ultimately ruled against Boeing, there was clearly tension building over the importation of Bombardier aircraft.

Bombardier’s solution was to sell the CSeries to Airbus in 2018. Airbus then announced that the CSeries would not be assembled in Canada, but at the Airbus final assembly line in Mobile, Ala., U.S. — the plane, therefore, would become a product of American manufacturing. Airbus, in the process, also renamed the CSeries to the A220.

However, Bombardier’s commercial aerospace manufacturing facilities in Belfast, Casablanca and Dallas were not part of the sale of the CSeries to Airbus. Bombardier held onto these, but announced earlier this year that it was interested in divesting the Belfast and Casablanca locations. The list of potential buyers was short, and Spirit AeroSystems was at or near the top, so this acquisition is not a surprise.

The Belfast operations (there are actually six plants in Belfast) are notable because Bombardier manufactures there the composite wings for the A220. More importantly, these composite wings are made via liquid resin infusion, followed by a short cycle of autoclave consolidation. Composite wings for the Boeing 787 and 777X and the Airbus A350 are all fabricated using autoclave-cured prepregs. The use of infusion, therefore, represents a departure from the norm and, possibly, a harbinger of things to come. Because of this, the A220 wings are, arguably, the most important part of Spirit’s acquisition.

Why? This puts Spirit AeroSystems squarely in the middle not only of current A220 wing production, but wing production for future single-aisle replacement programs as well — liquid infusion is an attractive process for high-rate aircraft production and is being aggressively developed by both Boeing and Airbus for next-generation commercial aerostructures, particularly wings. For more, see this CW report on use of infusion in future aircraft. 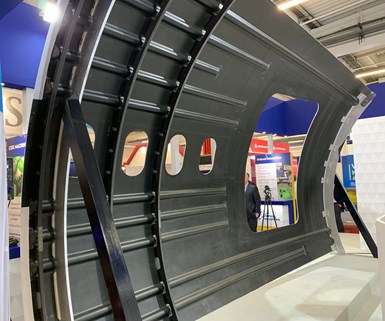 Back side of Spirit’s ASTRA fuselage panel. Source | CW

Consider as well the work that Spirit is doing to develop next-generation composite fuselage structures. Last summer, at the Paris Air Show, Spirit introduced ASTRA (Advanced Structures Technology and Revolutionary Architecture), its demonstrator fuselage panel for single-aisle aircraft production at rates of 60 shipsets per month minimum. The panel is fabricated with autoclave-cured epoxy prepreg, but Spirit told me that it has also has done work on a thermoplastic composite version as well. This is important because much of Spirit’s current manufacturing capacity is devoted to fabrication of the aluminum fuselage for the Boeing 737. That plane will eventually be replaced, as will much of the aluminum fabrication capacity associated with it.

The bottom line is that Spirit AeroSystems’ acquisition of Bombardier’s Belfast operations signals a major shift in the aerospace supply chain hierarchy. Further, it signals that Spirit AeroSystems sees itself as the vital part of a future in which composite materials and processes dominate all of the major structures manufactured for all commercial aircraft.