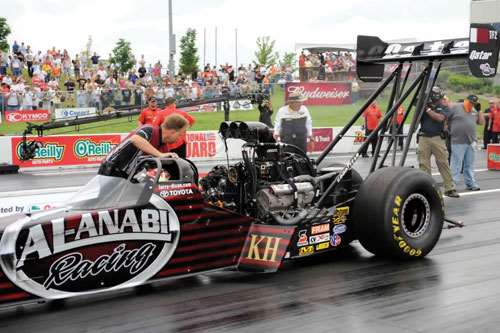 By far the car’s most crucial aerodynamic element, the rear wing provides the massive downforce required to keep a top fuel dragster — the fastest-accelerating vehicle in the world — connected to the track. It demanded high strength to handle the aerodynamic forces exerted on it during a pass down the track, where speeds routinely exceed 320 mph in less than four seconds. The company also designed the wing to withstand extreme vibration loads and handling during the long race season.

A stringent lab test conducted by The SFI Foundation Inc. (Poway, Calif.), a nonprofit that issues and administers standards for specialty performance and racing equipment, applied nearly 8,000 lb/3630 kg of force to the wing in several iterations with a hydraulic ram. After multiple tests, permanent deformation of the wing surface was <0.030 inch, says Aerodine’s chief engineer Craig McCarthy, who reports that the company is working on a complementary front wing.

Aerodine also builds most of the carbon fiber composite air injector “hats” for the sport’s 8,000-hp engines and parts for driver protection and other car body parts.
“Aerodine Composites was an important asset to Al-Anabi Racing in our quest for the Top Fuel championship,” says  Al-Anabi team manager and crew chief Alan Johnson. “With no on-track testing, we were able to mount the rear wing and successfully run it in competition, which is a testament to their ability to get complex jobs done right the first time.”