The U.K.’s National Composites Centre (NCC, Bristol, U.K.) held an event on Friday February 28 celebrating the center’s investment in an additional 9,948 square meters of space and 10 state of the art digital manufacturing technologies.

The investment is part of a digital capability acquisition program known as iCAP, a £36.7 million investment in 10 technologies tailor-made to the NCC’s specifications with the goal of speeding the development of composites manufacturing for a range of markets. The iCAP program is funded by Aerospace Technology Institute (ATI, Cranfield, U.K.), Local Enterprise Partnership and the High Value Manufacturing Catapult (Solihull, U.K.). 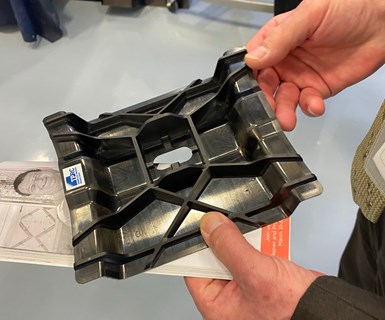 “Our mission is to mature composites technology out of the academic research area into a production-ready environment,” says Rich Hooper, director of engineering and manufacture at NCC.

To that end, for the past two years, a team of NCC engineers, researchers, software architects, roboticists and textile experts have been exploring how digital technologies can make composite parts easier to design and improve the speed and cost of manufacture.

The aerospace sector is a significant driver of the demand for high-rate composites manufacturing. According to the NCC, using current, labor-intensive techniques, manufacturers can only make 6 pairs of wings per month — the likely rate of production needed for a future single aisle aircraft is 100 pairs per month. The NCC is a partner in the Airbus Wing of Tomorrow Programme, which has a goal of developing a high-rate commercial aircraft wing structure manufacturing process involving more automation, fewer parts, better parts integration, faster cycle time, faster NDI and faster assembly. 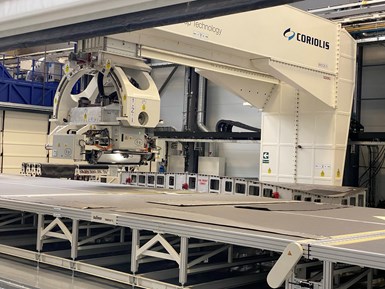 The NCC’s new equipment includes a new pilot line which will be used for the Wing of Tomorrow. The high rate deposition system comprises two huge industrial robots that automate the wing production process. Weighing 45 tonnes and 24 tonnes respectively, the robots measure, cut, lift and place pieces of carbon fiber fabric (‘plies’) with millimetric accuracy. 5-meter wide strips of composite material, up to 20-meters long, can be laid in one precise movement, potentially cutting the number of fabric components required from around 100,000 to just 150, and reducing wing-build time from one week to one day.

Once the plies are laid the wing is vacuum bagged and moves into a new 20 -meter long oven equipped with large scale resin infusion tanks. The wing is cured in the oven at 180º C within 8 hours.

The new technologies at the NCC are not only helping to re-think how aircraft wings are made, but are also helping to bridge the gap between academic research and industrialization in a range of markets from construction to oil and gas.

“[This] investment in 10 new world-leading composites capabilities will enable us to develop the wings and engines for the aircraft of the future, work on technologies that will define the way we produce and store energy and transform the way we build infrastructure,” says Richard Oldfield, CEO of the NCC.

“Membership has doubled in the last year, but has doubled out of the non-traditional sectors,” he adds. “That really exciting … it really does open up fantastic opportunities.”

Other technologies include a circular braider from Eurocarbon (Sittard, Netherlands), the largest of its kind in Europe, which automatically weaves up to 288 individual strands of high strength carbon fiber to create hollow 3D shapes (or geometries), for products such as pipes or aircraft propellers.

A new overmolding cell supplied by Engel (Schwertberg, Austria) features a horizontal 1,700 tonne press, injection barrel temperatures/pressures up to 420°C and 2,000 bar with a shot volume up to 6,400 cubic meters. The goal of the overmolder is to enable the mass-production of composite components. 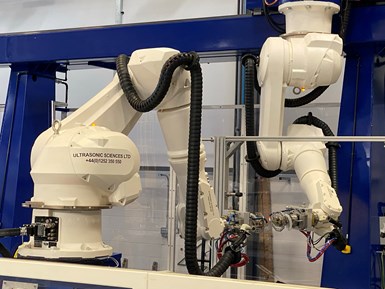 For nondestructive inspection (NDI) of parts, the NCC has commissioned two, 3-meter high robots that work in unison to scan the component by beaming ultrasound through high-pressure water jets.  The system then measures the time taken for sound to travel through the part, alerting operators to any anomalies.