The Ferrari 812 Competizione makes extensive use of carbon fiber components, not only for mass reduction but for air management. All photo credit: Ferrari

Ferrari (Maranello, Italy) has launched a limited edition car, the 812 Competizione, which is available both as a coupe and with a targa top — a carbon fiber targa top. The car is powered by a naturally aspirated 6.5-liter V12 that produces 819 horsepower.

This mass reduction effort took place in all aspects of the car, whether it was the use of titanium con rods in the engine, or carbon fiber trim for the cockpit. The body shell is one area where there is extensive use of the composites, including the front and rear bumpers, rear spoiler and air intakes.

One of most the notable features on the front of the car is the transverse groove in the hood into which a carbon fiber blade is fitted. This is for both function and aesthetic. As for the former, it increases the surface area of the vents that provide air to the engine, while the latter makes the hood appear cleaner than would be the case were traditional louvers used.

The car has a top speed in excess of 211 miles per hour and can accelerate from 0 to 100 kilometers per hour in 2.85 seconds. So as can be expected, when the driver gets on the binders, there can be severe brake heating.

As a result, there are two carbon fiber air intakes, square in section, that flank the main grille (below which sits a carbon fiber splitter). The air intakes both provide brake cooling and provide air curtains that work to minimize the turbulence cause by the outer part of the front tires.

Weight savings also take the form of all-carbon fiber rims, which are being made available on a Ferrari V12 for what is said to be the first time. Compared to the forged wheels on the 812 Superfast, there is a total mass reduction of 3.7 kilograms.

The carbon fiber wheels are being produced by Carbon Revolution (Geelong, Australia), which has produced wheels for other Ferraris: the F8 Tributo, SF90 and 488 Pista. 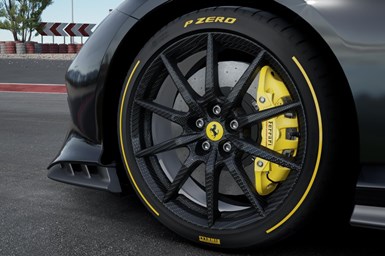 A composite wheel is available for the first time on a Ferrari V12 vehicle. It is produced by Carbon Revolution and is said to be 42% lighter than a comparable forged wheel.

According to Ashley Denmead, engineering and design director/co-founder of Carbon Revolution, the carbon fiber wheel weighs 42% less than a comparable alloy wheel.

When asked about the engineering of the wheel itself, Denmead points out that it is made entirely from carbon fiber, then adds, “There are many other proprietary elements to this wheel, including a plasma applied thermal barrier coating which protects against cases of misuse that may cause brake rotors and discs to overheat. This thermal barrier coating is less than 300 microns in thickness but can reduce thermal transmission by over 100°C.”