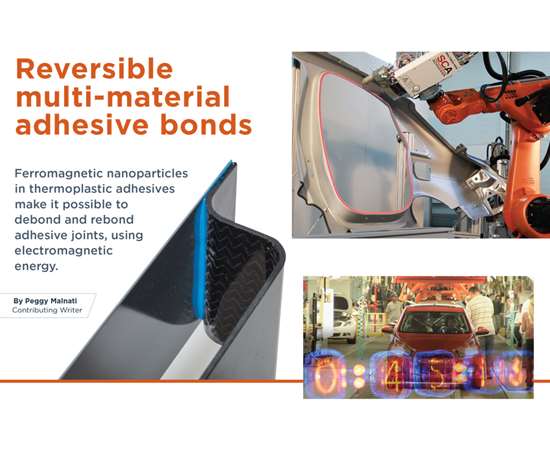 As the auto industry moves toward use of multi-material vehicle structures, the capability to structurally join components of unlike composition (photo, far left), keep them together during vehicle use life despite differences in coefficients of linear-thermal expansion (CLTE), then separate them for repair or recycling becomes an important consideration. Just as important, automakers want joining processes (near left, top) to take less than 1 minute, to keep up with assembly line speeds (near left, bottom).

Adhesive bonds spread stresses over the entire surface-to-surface contact area, can better accommodate differences in CLTE, and provide better surface aesthetics than mechanical fasteners. But unlike most fasteners, adhesive joints are permanent, preventing debonding for subcomponent repair and reassembly, or end-of-life recycling. Debondable/rebondable structural adhesive bonds could facilitate composites use in mixed-material vehicle structures and give those joints the reversibility of mechanical fasteners at reduced weight.

Researchers from the American Chemistry Council’s Plastics Div. and Michigan State University take a measurement as a electromagnetic coil excites ferromagnetic nanoparticles in an adhesive used to bond a small assembly. The team has demonstrated that an adhesive joint can be rapidly unbonded in the presence of an electromagnetic field, then rebonded again with another round of electromagnetic energy. At 4% particle loading, the joint has good impact and strength, but takes 10 minutes to heat and unbond or rebond. At 12-16% loadings, there is a small drop in mechanicals but the joint heats to unbond/rebond temperature in <20 seconds.

The reversible adhesive bonding research has enabled successful attempts to join a wide variety of metals, plastics and composites to create multi-material assemblies. When resin/particle surface compatibility and substrate surface prep are rightly done, the team has achieved joint shear strengths in the 12-13 MPa (1,741-1,886 psi) range, which it says is better than epoxy structural adhesives.

As the auto industry moves toward use of multi-material vehicle structures, the ability to structurally join dissimilar materials and keep them together during the vehicle’s useful life, yet also separate them for repair, rejoin them and then separate them again at end-of-life for recycling has become increasingly important. This is especially important for primary vehicle structures. These are far more safety critical than interior or exterior panels and, therefore, it’s vital to prevent unwanted separation during vehicle operation. They are also costlier to replace, which makes them highly desirable targets for repair rather than the junkyard if damaged.

The conventional structural joining technologies — welding, mechanical fastening (with its associated hardware) and adhesive bonding — each fall short of ideal in this new multi-material reality. 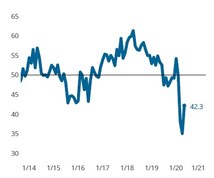 Effectively executed, welding produces strong joints but permanently links components, making it difficult to separate and repair subcomponents, and then rejoin them to the assembly. Also, welding is limited to certain metals and to thermoplastics, and is impractical for thermosets and for multi-material systems.

Mechanical fastening is a well-known industry standard for joining, and, in most cases, it is reversible. A damaged component can be disconnected from a larger assembly, and then a repaired or a replacement part can be reattached to the assembly. Although this approach works well with metal-to-metal assemblies, it is less desirable for assemblies that feature composite (and/or plastic) components because fasteners require drilling, or molding in, holes. Fasteners not only disrupt surface aesthetics, but also concentrate stresses, so provide opportunities for cracks or interlaminar separation to begin. Furthermore, coefficient of linear-thermal expansion (CLTE) differences between dissimilar materials can further increase stresses. Lastly, mechanical fasteners are heavy and, significantly, can corrode.

Properly executed, adhesive bonds (generally with thermoset polymers) are lightweight, protect surface aesthetics, and are stronger than surrounding material. The adhesive bond is preferred for joining composites because, unlike mechanical fasteners, it spreads joint stresses evenly over the entire surface-to-surface contact area. Bonding also is preferable for multi-material assemblies because the adhesive’s flexibility can better accommodate those differences in CLTE. Adhesive bonds, however, are typically permanent, making removal of components for repair or replacement impractical.

That could change. A multi-year research program involving the American Chemistry Council’s Plastics Division (ACC-PD, Washington, DC, US) and Michigan State University (MSU, East Lansing, MI, US), has yielded surprisingly effective results in its quest to develop reversible adhesive joints that can be debonded and rebonded multiple times. This capability could facilitate composites use in mixed-material vehicle structures because it gives adhesively bonded joints the durability and the reversibility of mechanically fastened joints at reduced weight.

This project came about when separate research efforts at MSU and ACC-PD intersected. Three years ago, MSU — through its Composite Vehicle Research Center (CVRC) headed by Dr. Lawrence Drzal, university distinguished professor and a renowned expert on composites, nanocomposites, and surface chemistry — submitted a proposal in response to a US Department of Energy (DoE) program aimed at exploring lightweighting and multi-material joinery.

At the time, researchers were working with graphene nanoparticles in thermoplastic polymers. They already knew that applying microwave energy excited the nanoparticles, and that doing so heated and melted only the polymer in which nanoparticles were embedded. This led researchers to think the phenomenon could be harnessed to create reversible adhesive joints. The project received a grant and research began.

ACC-PD’s parallel roadmapping projects, done with industry and federal government partners, had identified “technology gaps” that were slowing the adoption of lightweight plastics and composites in vehicle applications. One such gap was the need for better joining technologies for multi-material structures. “Seeing the problem, our member companies decided to take the initiative and try to develop a solution,” recalls Mike Day, an ACC-PD technical consultant and career-retiree from DuPont (Wilmington, DE, US). While conducting a technology review for possible solutions to the bonding problem, ACC-PD discovered MSU’s work and contacted the university a month into the DoE research program.

Not long after collaboration began, the joint MSU/ACC-PD research team ran into a problem. Researchers checked how big commercial microwave-generation units were. “The biggest variable-frequency microwave ovens anyone seemed to be making were the size of home microwave ovens,” recalls Dr. Mahmoodul Haq, MSU assistant professor – Department of Civil & Environmental Engineering. “Those were too small to be practical for field use — particularly for some of the structural applications we were envisioning.” Until in-field microwave applicators were developed, it was back to the drawing board to find another nanoparticle that could be excited by energy transmitted by a device not so size-constrained.

“Fortunately, there are lots of nanoparticles out there,” he adds. “For example, we knew ferromagnetic particles could be excited with electromagnetic energy, and that to generate that energy, all we needed were small coils without all the surrounding structure you need to safely operate microwave systems.” Making that shift put “rockets under the project,” Haq recalls.

Fast forward three years and a lot has been accomplished. The team has used iron oxide (Fe2O3 and Fe3O4) nanoparticles at loadings of 4-20% in a variety of thermoplastic adhesives. “We characterized the particles in and out of the adhesive, so we could understand their synergy and be able to predict when impact and strength would drop, and what concentration was best so mechanicals stayed good but the bond was quickly reversible,” explains Haq. “For example, at 4% loading, the joint has good impact and strength, but takes 10 minutes to heat. However, at 12-16% loadings, we have a small drop in mechanicals but we can heat the joint in less than 20 seconds. Those bonds still carry loads, prevent fractures, resist fatigue and eliminate corrosion.”

They started with polyamide (PA) 6 and 6/6, then tried acrylonitrile butadiene styrene (ABS), polycarbonate (PC), high-impact polystyrene (HIPS) and several olefin-based hot-melt adhesives. Thanks to Drzal’s surface-chemistry expertise and the team’s hard work, Haq says they now know how to adjust the surface chemistry of not only the polymers but also the nanoparticles and, therefore, can make the technology work in just about any thermoplastic adhesive system, although he acknowledges that some polymers require more adjustment than others.

“This is a fairly tailorable technology, so it doesn’t matter if we’re using amorphous or crystalline, polar or non-polar resins,” he adds. “It’s just a matter of establishing application needs, then adjusting the chemistry so functional groups on particles match up with those on the polymer.”

“It’s been part of our technology approach from the beginning to think of this as an enabling technology,” adds Day. “We took a fairly broad view of thermoplastics as an adhesive element and tried lots of resins so we weren’t limited to one polymer family.” He notes that specific commercial applications will still require fine-tuning, regardless of which package is used. “This is pre-competitive work, so we knew we couldn’t figure everything out, but had to focus on proving the concept,” Day explains.

When resin/particle surface compatibility and substrate surface prep have been rightly done, the team has achieved joint shear strengths in the range of 12-13 MPa (1,741-1,886 psi), which it says is better than epoxy structural adhesives.

Interestingly, bond strength reportedly increases after several cycles of bonding/debonding vs. that achieved via convection heating alone. While the initial target was to create a reversible joint that could survive six cycles of bonding/debonding — a goal the team thought a reasonable lifetime expectation — they were pleasantly surprised to find joints surviving 20 and even 100 cycles. Also, electromagnetic bonding is faster than with convection ovens, it does not heat surrounding substrates and is amenable to automation.

From the theoretical to the practical

When the technology moves from the lab to commercial application, however, manufacturers will need to be aware of certain limits. One is that regardless of the plastic used in the multi-material mix, it must be a grade without internal mold release, to avoid potential release interference with the bond. Another is that, despite the seemingly limitless theoretical ability to debond/rebond, in practical terms, bondline thickness will limit the number of cycles a joint can survive. The joint is thin to start with and becomes thinner with each rebonding cycle as resin is squeezed out when substrates are forced together.

A third concern is whether composites with ferromagnetic particles in the matrix could increase the risk of galvanic corrosion when joined to metal. “We’ve been thinking a lot about this issue,” notes Haq, who says his team has had joints with 18% particle-loading levels sitting in salt-corrosion chambers for more than two months without seeing any corrosion. He feels confident that adhesive and substrates can be tailored for each application in ways that avoid such galvanic reactions.

So far, substrate geometry has not presented limitations. The technology has been successfully applied to lap shear joints, out-of-plane T-joints and torsional joints. While exceptionally large electromagnetic coils probably present a practical size limitation, another MSU professor, Dr. Lalita Udpa, is working on coils to go around very tight geometries.

To avoid that late-project falter when it is often discovered that a technology is feasible but not affordable, ACC-PD worked with analysts at the Center for Automotive Research (CAR, Ann Arbor, MI, US) to evaluate the economics of reversible bonding in current automotive assembly operations. “You can do technical research all you like,” explains Day, “but in the end, economic reality can really complicate things if you don’t address it.” Based on benchmarking different joining technologies and comparing those with the new process, the team believes its reversible bonding technology will be cost-effective. Because a trained workforce will be needed to apply a commercially viable technology, MSU undergraduate and graduate students are deeply involved in the research.

What’s next? The team is looking at coating nanoparticles to increase toughness, reduce corrosion risks, and improve dispersion. They also are wrapping up simulation work and looking for partners interested in field trials.