On the road with CompositesWorld

September and October have been a couple of travel-filled months for the CW team. The largest composites industry event, CAMX, was held in late September and we also attended the SPE ACCE automotive composites conference as well as some facility tours and site visits (which will be featured soon in upcoming issues of CompositesWorld magazine). In the meantime, here are a few trade show highlights including CW Senior Editor Scott Francis’ video recap from CAMX.

In early September CW attended The Society of Plastics Engineers’ (SPE, Bethel, Conn., U.S.) annual Automotive Composites Conference & Exhibition (ACCE) in Novi, Michigan, Sept. 4-6. The theme of the conference was “Composites — Forming the Future of Transportation Worldwide,” and offered a broad technology overview of evolving automotive composites industry. Much of the programming reflected a growing interest from transportation OEMs in the role composites technologies can play in next-generation mobility. If you missed the conference, here are a couple of reports that give an overview:

A couple of weeks later CAMX 2019, the largest composites and advanced materials expo in North America, took place Sept. 23-26 in Anaheim, Calififornia. The show gathered around 8,000 attendees and featured more than 520 exhibitors and was packed with technical presentations and networking opportunities.

The potential for thermoplastics to enable high-volume production continues to be a big topic of discussion at the show. One example (and CAMX award finalist), is a  demonstrator access panel for the Bell V-280 Valor tilt-rotor aircraft developed by the TPAC (Enschede, Netherlands) using its TPC-Cycle process, a project aimed at the re-use of production scrap from thermoplastic composites processing for aerospace and high-volume applications.

Learn more about TPAC’s demonstrator access panel in the article “The state of recycled carbon fiber” and about the TPC-Cycle process in the article  “Recycled thermoplastic composites for production.”

Mallinda (Denver, Colo., U.S.), a new exbitor at CAMX, showcased a new class of polymeric materials it calls Vitrimer Matrix Composites that provide the mechanical performance of traditional thermosets along with processability and recyclability similar to that of thermoplastics. 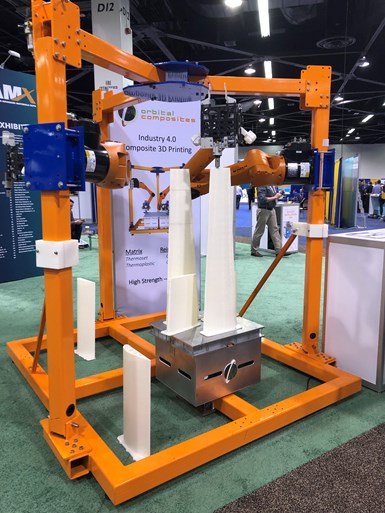 Orbital Composites, a new exhibitor at CAMX this year, unveiled a new product it calls Orb-S to address the needs of Industry 4.0 factories. Orbital’s manufacturing platform is designed to aid manufacturers in their transition into the Industry 4.0 and additive manufacturing revolutions. (Learn more here.)

Airtech (Huntington Beach, Calif., U.S.) announced at the show its acquisition of a Thermwood (Dale, Ind., U.S.) LSAM machine and had a large 3D printed mold on display. The LSAM relies on thermoplastic extrusion, a core competancy of Airtech, and the company says it can take tooling from conception to the shop floor significantly faster than using conventional methods. (Learn more here.)

For more of the happenings at CAMX, you can also check out copies of the ShowDaily:

And those are just a few quick highlights; stay tuned to CW for more insights from CAMX, site tours and much more.