One challenge for composite 3D printing and other manufacturing processes to continuing scaling up to higher-volume applications is the time it takes to cure composite parts. Research into a rapid-cure, additive-enhanced resin matrix system may provide one solution.

A recently published study from researchers at Swinburne University of Technology (Melbourne, Australia) in collaboration with researchers at Deakin University (Geelong, Australia) looked at use of solvate ionic liquids (SIL) — additives that combine a solvent with a metal salt — as a catalyst to enable faster cure times and lower cure temperatures for epoxy resins. According to the paper, other types of ionic liquids have been used as additives in plastics for some time, but SILs are a relatively new class of these liquids and are still being studied. 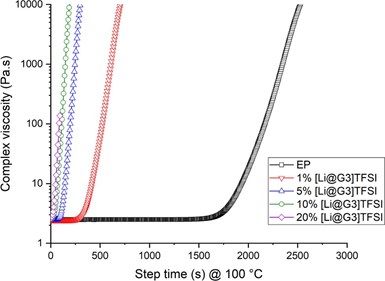 For this study, the researchers added different amounts by weight (from 1% up to 20%) of SILs, in combination with a hardener, into an epoxy matrix and heated to melting point. The paper reports that the epoxy system without additives cured in approximately 31 minutes at 100°C; the addition of only 1% by weight of SIL additives resulted in an 80% reduction in cure time, and lower for larger SIL amounts (see Fig. 1). According to the study, this type of enhanced epoxy resin shows potential for enabling faster, higher-volume 3D printing and other composites manufacturing processes.

In addition, faster cure time wasn’t the only property observed by the research team in SIL-enhanced epoxy. According to Swinburne’s Dr. Nishar Hameed, a senior research fellow who led the project and is an author on the paper, this project grew out of research he has been working on over more than 10 years, investigating the interactions of ionic liquids with epoxy resins and other polymers. In his initial research, Hameed and his team weren’t looking for rapid cure time at all, but found that ionic liquid enhancement transformed traditionally brittle epoxy polymers into a flexible and formable material (see Fig. 2).

Fig 2. At left, the flexible elastomeric epoxy can be bent and twisted by applying small force and it returns to original shape after the force is removed. Pictured right, the flexible thermoset epoxy before and after 280% elongation. (Nishar Hameed et al, Chem. Commun., 2015, 51, 9903—9906 and; fusilli concept adapted Montarnal, etal Science, 2011, 334, 965–968). Photo Credit: Swinburne University of Technology

“We found epoxy can behave like a room temperature, flexible, ductile thermoplastic, and also like a stretchable elastomer,” Hameed says. “Using experimental and theoretical approach, we identified the reversible charge transfer mechanism allowing the epoxy network to be flexible.” (See Fig. 3.)

Building on this finding, Hameed and his team at Swinburne collaborated with Dr. Luke Henderson’s team at Deakin University to investigate whether solvate ionic liquids showed similar flexibility properties. 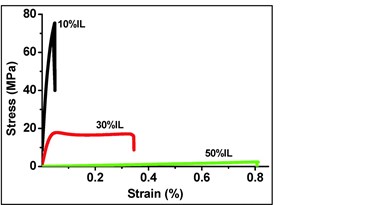 “The discovery of rapid-cure behavior in epoxy with solvate ionic liquid was serendipitous,” Hameed admits. The researchers realized from the first trials that the process was going “way too fast,” he says, meaning the epoxies were curing much faster than normal, and more than anticipated. “We then had to work with a range of ionic liquids, different concentrations and process conditions to tailor the mechanism of rapid curing behavior and associated physical properties,” he says.

“There was a 72-fold increase in cure rate for our new resin formulation compared to the benchmark resin,” he says, “and in some compositions the reaction was [so] extremely fast that we were not able to measure it. Curing was complete before we were able to do any testing.”

Significantly, Hameed adds, this approach not only increases the cure rate, but also reduces the curing temperature of the resin, pointing to potential energy savings in manufacturing processes using this matrix.

Additional research is still needed before these resins are ready to leave the lab. “Before stepping into commercial pathways, we have to address some of the fundamental challenges associated with the rapid materials manufacturing. For example, in rapid-cure composites, the epoxy cross-linking reactions occur within seconds with fast heating-cooling cycles and molding-demolding processes, leading to process-induced stresses,” Hameed says.

To solve these issues, he and his team are working on a combined experimental and computational modeling-based approach to identify and mitigate any imperfections. “This is critical for the integrity and efficiency of composite structures and the associated manufacturing processes,” he says.

In the future, Hameed sees potential for SIL-enhanced, fast-cure epoxies in composite additive manufacturing, which he says is often hampered by slow material processing, a challenge easily addressed by rapid-cure resins. “We are developing formulations that are able to be solidified in a matter of seconds using stereolithographic technique and thus speed up the part production time,” he adds.

Other composites manufacturing processes under evaluation include infusion, resin transfer molding (RTM) and other forms of automation, as well as tailoring for prepreg systems, and use in quick-drying, epoxy-based paints, surface coatings and sizing. The flexibility of the resin systems will also enable use in thermoforming, Hameed says, which is typically difficult for thermoset-based composite laminates.

“Additive manufacturing (including composite automation) along with rapid processable polymers is predicted to be the future of the high-volume composite manufacturing as well as series production of composite parts,” he adds. “Rapid cure resins and prepregs are critical to this approach where we need materials that must be ready in a matter of seconds, if possible.”

Research is ongoing at Swinburne’s Factory of the Future 3D printing and rapid prototyping facility, along with advanced surface coating research and development at the ARC Centre for Surface Engineering for Advanced Materials (ARC SEAM).

Hameed says: “This will be an opportunity to bring together capabilities and expertise from many different areas, ultimately to address manufacturing challenges for composite industries.”

For the full results and findings, see the full paper, which was published in the July 10, 2020 issue of ACS Applied Polymer Materials.