Addcomposites is democratizing composites manufacturing by leasing a low-cost toolhead that turns any robot into an automated fiber placement machine.
#autoclave #composites4_0 #space

“Our goal is to reduce the barriers to composites manufacturing,” says Addcomposites CEO Pravin Luthada. Addcomposites has developed an automated fiber placement (AFP) tool that mounts onto any existing robot arm.

The AFP-XS is available for purchase, but also for lease. It is lightweight, weighing 6.5 kg empty, and compact. “We ship it in a box roughly the size of a computer desktop tower,” says Luthada. “The replacement cutting blades and consumables are also included in the rental cost.”

To me, this has a high potential for disruption and is also almost unavoidable as the industry moves forward toward Industry 4.0 smart production lines and factories. We are already seeing such lines established by Airborne’s partnership with SABIC and the Factory 4.0 Testlab at Swinburne University. We are also watching AFP and 3D printing converge and the combination of multiple processes into single automated systems or cells (e.g. AFP and filament winding, CNC machining, laser surface treatment and joining, etc.) in order to achieve new flexibility, multifunctionality and speed. If Addcomposites has its way, large, expensive AFP cells may soon become a thing of the past.

The vision for Addcomposites’ AFP-XS tool head originated several years ago while its CEO was working for the Indian Space Research Organization (ISRO). Notably, India, is one of the fastest growing markets for composites, and yet, “there are no AFP systems in India that I know of,” says Luthada. “At ISRO, we floated a tender for an automated system to manufacture composites, mainly laminates and sandwich structures for satellites and launch vehicles, but all of the responses we received were too expensive. ISRO was quite successful in its space programs, but it continued to manufacture most of its composite products using hand layup.”

Thus was born Luthada’s passion for developing accessible composites manufacturing. “On the way to founding Addcomposites, I built and deployed fiber winding machines and 3D printing systems for plastics and ceramics.” When he relocated to Finland, to pursue his Master’s Degree at Aalto University near Helsinki, Luthada was able to start a research project to make automation in composites more accessible. “Aalto is not so strong in composites, but they are very strong in digital manufacturing, thanks to the open innovation ecosystem in Finland,” he explains. “We were able to start fresh and rethink the whole design of the AFP tool head, exploring how to keep the cost as low as possible.”

“We simply approached the problem differently from current suppliers,” says Luthada. “Where they are building large, expensive, stand-alone cells, we have developed a tool that can plug and play into existing infrastructure — that is, any robot arm.  Thus, our customers don’t have to invest in another cell.” Still, the team was not willing to sacrifice aerospace quality. Luthada notes that the AFP-XS tool is rugged, built with high-quality parts. “Our main effort was in software and control.”

Open and adaptable ecosystem for Composites 4.0

“We started to look at how to develop offline programming software,” he continues. “We spoke with Dassault Systèmes and Autodesk, among others, but the systems would become too expensive for our customers. So, we looked at what open software systems were out there.” The winner? Rhino 3D. “It is available for a lifetime license fee of about 1,000 euros,” says Luthada. “It also enables visual programming, which makes it easier to script custom changes within the program, for example, creating a motion plan based on each machine’s domain-specific language.”

“Though we try to already provide most of what the user needs,” he continues, “the software has been designed so that operators can tap into the controls and access the data. Connecting and controlling the currently available AFP/ATL (automated tape laying) tools to any existing motion platform like a robotic arm or CNC machine is usually quite challenging. ATL/AFP suppliers typically restrict IO (input/output) of the tool. We decided, however, to use EtherCAT controls, which operate like a high-speed train of information running constantly between the IO ports of the robotic arm controller and the tool. Data gets collected or dropped off at each station based on predetermined commands to provide full access, feedback and control of the information transmitted between the robot and the AFP-XS tool. This approach enables real-time control and communication for Industry 4.0 applications.”

Luthada notes this ecosystem of openness affords a lot of flexibility. “We enable very high accessibility so that anyone working with CAM (computer aided manufacturing) can integrate it into their robotic platform. For example, you can adapt the AFP-XS to talk with inline monitoring systems or with a robotic filament winder.” He notes that automation providers recognized what is being offered from the company’s initial press release (see “Addcomposites introduces plug & play AFP/ATL”). “A number of them reached out to us, wanting to integrate our system into their manufacturing cell offerings.” Even more important, Luthada points out, “our design also makes it simple to get started and running with this system.”

The AFP-XS uses the Addpath software, an open platform based on Rhino 3D.
SOURCE | Addcomposites

The AFP-XS tool head can process dry fiber and prepreg tapes in widths from 5 mm to 20 mm. “As we developed the tool head, we have optimized it for each material,” Luthada explains. “We began first with dry fiber but are now working with thermoset prepreg and low-temperature thermoplastic prepreg, that is, materials with a Tg below 200°C, such as PLA and polyamide. When running thermoplastic tape, we are improving the system to perform in-situ consolidation (ISC).” He says the company will soon have a good amount of data based on an ISC thermoplastic tape project it has been conducting for some time. “We are also running out of autoclave (OOA) thermoset prepreg at the end of this month.” 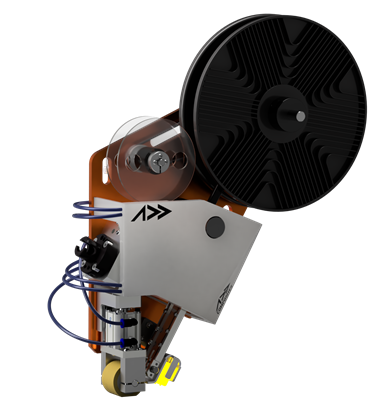 Regarding the tool head, Addcomposites developed each component with the goal of keeping costs low, yet achieving aerospace quality. “We developed our own cutter,” says Luthada. “It took many iterations, but it is extremely lightweight, really compact and rugged. We currently meet -0/+2 mm in accuracy but are working to push even tighter tolerances.”

The low weight of all the components is key. “The weight of the toolhead is less than 10 kg, varying only by how much fiber the user wants to load on the spool,” says Addcomposites business development manager James Kuligoski. Previously a quality engineer at Hexcel, he adds, “This helps to minimize the size of the robot needed, and thus reduces equipment and operating costs.”

For heating, the AFP-XS currently uses infrared and hot air. “We are not using lasers because they are too expensive, plus they have higher operating and maintenance costs,” notes Kuligoski. This is one reason why higher temperature thermoplastics are still in R&D. However, Addcomposites is also exploring other heating technologies which offer performance yet are affordable.

Addcomposites is offering the AFP-XS for purchase, but also for lease at rates of 2,000 to 3,000 euros per month depending on the lease period. “Our idea was that even as a small start-up or research group, you could rent the tool to help with production design,” Luthada explains. “You have your FEA and part design ready but now need to optimize for manufacturability. The designer can request a simulation of the part manufacturing via our website. The company can then rent the tool for as long as needed, plugging it into a robot on-hand. We can also provide assistance with local robot suppliers if necessary. When they are finished, they can either return the equipment or buy it at a reduced price.”

By the beginning of 2020, Addcomposites wants to roll out this program to every country in the EU, starting first with France, Germany, Poland and the UK. “Next year, we want to get 20 tools in Europe and the U.S,” says Luthada.

Addcomposites has already used the AFP-XS for space industry development work in Finland and worked with another Finnish company who develops thermoplastic tapes. It has also just completed a manufacturing automation project with the largest composites manufacturer in Finland and is conducting initial pilot work for a company in the U.S.

“Our market includes universities and research centers but also small to medium companies that are currently making composites using hand layup and want to get experience in AFP and automation,” says Kuligoski. “We can run trials and video the machine while it is making the parts. They then can lease and/or buy the tool after seeing it in use on their products.”

How does it stack up?

Luthada concedes that the output of the AFP-XS tool head is not yet as high as the large cells currently sold by AFP system suppliers. “But we don’t lose laydown speed,” he counters. “The materials we are processing are the same. We see much better results with tapes that have low variation, just like everyone else. But as far as the quality of the final laminates produced, there is no difference.” Because the company is not infusing or curing these final laminates itself, but instead supplying the equipment for manufacturers, it is still in the process of collecting laminate data. With several programs now finishing, he notes this data will soon be posted on the Addcomposites website.

“We started the research project at Aalto University in 2017 and established Addcomposites in 2018,” says Luthada. “We have learned so much by working with a range of manufacturers and are continuing to advance the AFP-XS system. These improvements will be rolled out to all users as they are tested and proven. Right now the system works with Kuka robots and is in the process of being proven with ABB and Universal Robots.”

“We believe composites is the future for advanced manufacturing,” says Kuligoski, “and we are passionate about bringing smart, automated production to all composites manufacturers in a way that’s affordable.”