Evolving AFP for the next generation

‘Aerospace quality at automotive pace’ is the mantra of the supply chain being developed for next-generation commercial aircraft. Automation is evolving to meet the challenge.
#airbus #boeing #787

If automated fiber placement (AFP) and automated tape laying (ATL) were the manufacturing processes that enabled widespread application of composites in the Boeing 787 and Airbus A350, then it will also be AFP/ATL that lead the way for the next generation of commercial aircraft, now on drawing boards. The difference this time around? Rate. 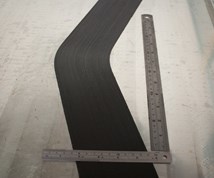 All of this means that automation technology must be developed now if it wants to keep up with the quality and production rate requirements of next-generation aircraft. None of this is lost on Electroimpact (EI, Mukilteo, Wash., U.S.) senior engineer Todd Rudberg. Rudberg and EI entered the composites world in 2004 when the company developed AFP technology for manufacture of the 787 Section 41 forward fuselage section fabricated by Spirit AeroSystems (Wichita, Kan., U.S.). EI subsequently went on to produce AFP and ATL systems for manufacture of other 787 structures, A350 structures, engine structures and, most recently, Boeing 777X wing spars. Now, Rudberg is looking at the future of next-generation aircraft manufacture and sees opportunities for AFP to improve. Substantially.

The opportunities, says Rudberg, are obvious when one looks at the data. In fact, EI has developed several metrics to help the company understand what its machinery does well, and what it can improve. First, in looking over the 2019 AFP landscape, Rudberg sees myriad threats to current AFP technology, including ATL, hand layup, flat charges of woven fabrics and, of course, aluminum.

The AFP metrics Rudberg developed come from a full production demonstrator (FPD) project for which EI conducted four pre-production builds. Data from one of those builds, done in February 2019 with “standard” EI AFP technology, revealed a substantial machine utilization challenge, with machine use time falling into one of seven buckets:

There is also one overarching AFP metric that needs explanation: mean strips before failure (MSBF). This is the average number of fiber tows placed between placement failures. The larger this number, of course, the more reliable the machine and the process is. The February FPD build, says Rudberg, had a 5,365 MSBF.

Looking more closely at AFP operation, says Rudberg, EI has direct control over only three operations: run, error recovery and inspection. And this is where the company is focusing its efforts. That said, Rudberg points out that the airframer also has a role to play, particularly in reduction of quality inspections, breaks and operator-induced stops. “We have to realize that run times have gotten really low because machines are very fast,” he says, “and anything that is non-value-added has a massive impact on your utilization. So, it turns out this is a team sport. Not only does the OEM — me — have to do better, the airframer also has some responsibility.”

All three have been assessed by EI in a series of recent FPD project builds after that initial February build. Data from the FPD project itself prove that EI is headed in the right direction. Rudberg says the AFP system used — called MuSCLE — achieved 1,500 horseppower peak power, 0.5G acceleration/deceleration, a 4,000 inches/minute laydown rate, a head turn time of 1 second, a spar corner speed of 120 degrees/second and 6,000 MSBF (achieved in production).

The conversion to servo motor creels, and away from servo pneumatic creels, says Rudberg, has been done to increase tow placement speed, tow placement accuracy, tow tension control and overall build reliability. The company has spent the last two years working on a compact servo drive that can be installed on the EI modular head. The results of the technology, so far, are promising; testing shows: 15,000 MSBF, 87% faster add speed, 36% faster cut speed, better end placement accuracy. Further, EI proved that the servo motor creel system could be used to place dry carbon fibers.

The key for inspection is the “in-process” part. EI already has inspection technology, developed with Aligned Vision (Chelmsford, Mass., U.S.) and deployed on the 777X wing manufacturing line that uses laser and vision technology to check for laps, gaps, wrinkles, end-placement errors and foreign object debris (FOD). This system, however, exists independent of the AFP system and requires a clear field of view to operate — meaning the AFP head must be moved. Rudberg and EI have developed a new inspection system, called RIPIT, that is integral to the AFP head and inspects fiber placement as soon as it occurs.

EI will not divulge the nature of the technology behind RIPIT except to say that it is not laser- or vision-based. In any case, Rudberg says tests of the system reveal that it is able to detect, in real time, tow slippage to ±0.030 inch, add placement to ±0.050 inch and cut placement to ±0.050 inch. Further, says Rudberg, “We have done plenty of trials correlating RIPIT data with the existing Boeing-qualified vision system [Aligned Vision system used on 777X] and we get correlation.”

The value of data management, says Rudberg, rests in the ability of EI’s systems to help fabricators see more clearly how well the AFP process is working. To that end, EI has developed data visualization software — EI 4.0 — that offers visibility into not just how a given machine performed (based on MSBF) during a given build, but how individual tows and sequences performed. Basically, the software helps the operator see exactly where in the AFP head the problem is. “So, we will use this EI 4.0 to indicate where they [operators] need to go look in the AFP head to make changes,” Rudberg says.

Using this software, it is possible to graphically display MSBF for a variety of machine functions and identify problem fiber tows and particularly challenging sequences. The software also measures and reports other machine activities that might erode utilization. Using these data management tools, EI was able to optimize and reduce the build time for the OPS from more than 50 minutes to just less than 40 minutes. Other tools include shift performance comparisons and ply angle comparisons.