Standard connected beam used for T-boom applications in press shop manipulation. T-joint and attachments are made by bolting to the inserts placed in the corners of the profile. Source | CompoTech

CompoTech (Sušice, Czech Republic) has recently launched a new standard range of lightweight carbon finer (CF) epoxy composite beams in round tubes and square-shaped options and sizes, which can be specified instead of steel.

CompoTech says the standard square beams are produced from graphite and PAN carbon fibers using its automated robot-assisted filament placement technique, which places continuous fibers axially along the beam length. The result is a high-strength carbon epoxy composite beam with 10-15% higher stiffness in the axial direction and up to 50% greater bending strength compared to a conventional filament wound beam with the same dimensions.

All CompoTech beams are produced with automated filament placement (AFP) and precision press molded using a wet, two-part epoxy resin system. Curing is a two-stage process, first at room temperature to remove any residual stresses during molding that can cause deformation over time, then post mold curing in an oven. Compared with pultrusion, CompoTech says, its pressing technique provides a precision CF epoxy beam with very high dimensional accuracy and a close tolerance surface finish, which typically does not require costly CNC finish machining. 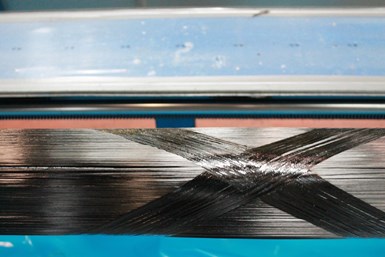 Both standard tubes and square beams are available in quantities from one-off to multiple batch orders. On request, CompoTech says it will look to add additional sizes to the standard round and square beam ranges, as well as continuing to offer its bespoke design and manufacturing service for industrial beams and other CF composite components to meet specific customer requirements.