MMC Pistons for the T.50 Supercar

For the extreme application in the 654-hp V12 engine, Cosworth turned to a metal-matrix composite for piston production.

The metal matrix composite — silicon carbide in aluminum — piston made by Cosworth for the Gordon Murray T.50 V12 engine has a redline of 12,100 rpm, which means the pistons need to be light and capable of withstanding high heat and pressure. All photo credit: Cosworth

Pistons for internal combustion engines (ICEs) need to be strong — cylinder pressures within an everyday vehicle can reach 1,000 psi and it is 1,500 psi for racing engines — and light, as there is the issue of reciprocating mass as the piston moves through the four cycles of combustion. They must be able to withstand high heat, as much as 4,500°F.

To meet these requirements, Cosworth (London, U.K.), a leading supplier of powertrains and components, is using a metal-matrix composite (MMC) material to produce pistons for the limited-edition T.50 supercar (100 will be produced) from Gordon Murray Automotive (Surrey, U.K.). The composite-intensive vehicle is fitted with a 654-horsepower (hp) V12 engine.

The material combines silicon carbide reinforcement in aluminum. It is sourced from Materion (Mayfield Heights, Ohio, U.S.), which named the material “SupremEX.” 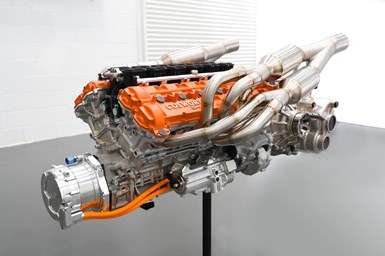 The material is said to have a specific stiffness of at least 40% more than other piston materials, contributing to reduced mass. Further, it has a 25% lower coefficient of thermal expansion (CTE) than conventional aluminum alloys used for pistons, which is important in applications like the naturally aspirated V12 being used in the T.50, which has a redline of 12,100 rpm. (Titanium is used for the connecting rods, helping reduce overall weight. The entire engine, incidentally, weighs just 392 pounds.)

What the material does

Speaking of the contribution of the MMC material to the engine, John Heath, Cosworth principal engineer, says: “For the GMA V12 engine, with its ability to run at speeds in excess of 12,000 rpm, the SupremEX material allowed us to design an extremely lightweight piston, utilizing the material’s excellent strength at high temperatures. This reduction in weight has the added benefit of allowing other components within the crank train to also have lower mass and reduced friction, which are essential characteristics when delivering an engine with such a high specific power output.” 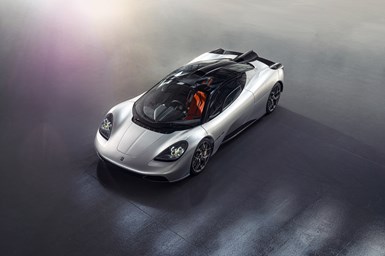 While 100 cars may seem small, Cosworth is using the MMC material to produce an even smaller run: It is reworking 11 turbocharged, 1.5-liter V6 engines that were used in Formula One racing during the mid-80s so that they can be used in street-legal vehicles.

Cosworth was contracted by Lanzante Ltd., a British specialty car provider, to transform the engines. Whereas they once produced 1,000 hp+ for F1 racing (cars with the engines had nine podium finishes during the 1984 F1 season), the engines are now producing 503 hp and 31-pound-feet of torque. The rev limit is 9,000 rpm which, according to Cosworth, makes the engines the highest-revving turbocharged engines in a street-legal car, and part of that performance is attributed to the high strength and low mass of the MMC material used for the pistons.