Despite marking 2020 as the best year in history for the global wind industry, GWEC warns that new wind power capacity needs to be installed three times faster over the next decade to achieve global climate targets.
#siemensgamesa

According to Global Wind Energy Council (GWEC, Brussel, Belgium), 2020 was the best year in history for the global wind industry with 93 gigiwatts (GW) of new capacity installed — a 53% year-on-year increase — and the second best year for offshore wind, but a new report published on March 25 warns that this growth is not sufficient to ensure the world achieves net zero by 2050. According to the recently released Global Wind Report 2021, GWEC’s 16th annual flagship report, the world needs to be installing wind power three times faster over the next decade in order to stay on a net-zero pathway and avoid the worst impacts of climate change.

Through technology innovations and economies of scale, the global wind power market has nearly quadrupled in size over the past decade and established itself as one of the most cost-competitive and resilient power sources across the world, GWEC says. In 2020, record growth was driven by a surge of installations in China and the U.S. — the world’s two largest wind power markets, at 48,940 MW and 16,913 MW for 2020 onshore wind capacity respectively — who together installed 75% of the new installations in 2020 and account for more than half of the world’s total wind power capacity.

Yet, as the clean energy technology with the most decarbonization potential per MW, GWEC says the report shows that the current rate of wind power deployment will not be enough to achieve carbon neutrality by the middle of this century, and urgent action must be taken by policymakers now to scale up wind power at the necessary pace.

According to the scenarios that have been established by international energy bodies such as IRENA (International Renewable Energy Agency, Abu Dhabi, United Arab Emirates) and the IEA (International Energy Agency, Paris, France), the world needs to be installing a minimum of 180 GW of new wind energy every year to limit global warming to well below 2°C above pre-industrial levels, and will need to install up to 280 GW annually to maintain a pathway compliant with meeting net zero by 2050. This means that the industry and policymakers need to work collaboratively and act fast to accelerate deployment, GWEC says.

GWEC is calling on policymakers to take a true ‘climate emergency’ approach to allow a faster ramp up including: 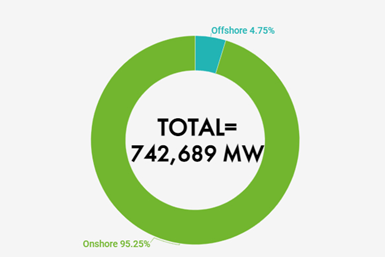 “Every year we fall short, the mountain to climb in the years ahead gets higher,” Ben Backwell, CEO of GWEC says. “People and governments around the world are realizing that we have a limited window to head off dangerous climate change. While many major economies have announced long-term net zero targets, we need to make sure that urgent and meaningful actions are taken now to make sure this ambition is matched with fast growing investment and installations of renewable power on the ground and in the water. It is really encouraging to see record growth in China and U.S. last year, but now we need the rest of the world to step up to get us where we need to be.”

According to Backwell, GWEC’s current market forecasts show that 469 GW of new wind power capacity will be installed over the next five years. However, a minimum installation of 180 GW every year up to 2025 is required to ensure the world remains on the right path to limit global warming.

“Chinese and American turbine manufacturers had a record of new installations that saw most of them moving up in global turbine OEM market rankings,” Zhao says. “This makes sense as it reflects the situation that the world’s two largest markets, China and U.S., had the lion’s share in global wind installation in 2020.”

Danish manufacturer Vestas (Aarhus, Denmark) held the title as the world’s largest supplier of wind turbines in 2020 across onshore and offshore wind, thanks to the manufacturer’s wide geographic diversification strategy, with new installations in 32 markets last year, and strong performance in the U.S., Australia, Brazil, Netherlands, France, Poland, Russia and Norway.

GE Renewable Energy (Paris, France), a subsidiary of General Electric (Boston, Mass., U.S.) moves up two positions to second place for 2020, mainly due to the explosive growth in its U.S. home market and its strong position in Spain. Despite disruption caused by COVID-19 to local supply chains and project execution in the U.S., GWEC says the American manufacturer reported more than 10 GW of installations, making it the number-one U.S. supplier for a second year in a row.

Chinese supplier Goldwind (Beijing) retains the third position in 2020, although it achieved a record year in its home market with more than 12 GW installations and its new installations in overseas markets passed the one-GW milestone for the first time. Goldwind still held the top spot in China for 2019, but the supplier lost market share at home due to strong competition from Tier 2 local suppliers.

Envision (Shanghai, China) ranks fourth in 2020, moving up from the fifth position in 2019, by taking advantage of strong market growth in its home market, where more than 10 GW was installed by the company in a single year, a record for the company.

These rankings will be published in the Global Wind Market Development ― Supply Side Data 2020, which will be released in late April 2021. Preliminary results are subject to change between now and the release date of the actual report.