Despite the impact of COVID-19, 2020 marks 6 GW of additional capacity for a total of 35 GW, with steady growth in China, Europe and the U.S.

According to the latest data released on Feb. 25 by Global Wind Energy Council (GWEC, Brussel, Belgium) Market Intelligence, the global offshore wind industry had its second-best year in 2020, installing more than 6 gigawatts (GW) of new capacity, and keeping growth on track despite the impacts of COVID-19 felt in other energy sectors. This growth was driven by a record year in China, which installed over half of the new offshore wind capacity globally last year. China currently leads the world in new annual offshore wind capacity for the third year in a row

Steady growth in Europe accounted for the majority of remaining new capacity, led by the Netherlands which installed nearly 1.5 GW of new offshore wind in 2020, making it the second-largest market for new capacity in 2020 after China.

Other European offshore wind markets also experienced stable growth last year, with Belgium (706 megawatts (MW)), the U.K. (483 MW), and Germany (237 MW), all installing new capacity in 2020. According to the report, the slowdown of growth in the U.K. is due to the gap between the Contracts for Difference (CfD) 1 and CfD 2, a financial contract that pays the differences in the settlement price between the open and closing trades. In Germany, the slowdown is primarily caused by unfavorable conditions and a weak short-term offshore wind project pipeline. 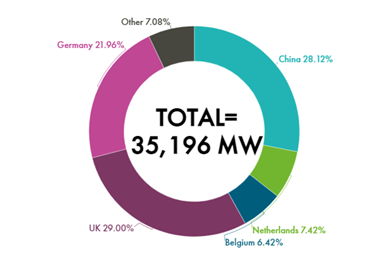 Overall, global offshore wind capacity now exceeds 35 GW — a 106% increase over the past five years alone. China has now surpassed Germany in terms of cumulative installations, becoming the second-largest offshore wind globally with the U.K. remaining in the top spot.

“The continued growth of the offshore wind industry globally throughout the pandemic is a testament to the resilience of this booming industry,” notes Feng Zhao, head of Market Intelligence and Strategy at GWEC. “Although China was hit first by the COVID-19 crisis, the impacts on the offshore wind sector were minimal, resuming ‘busines-as-usual’ as early as March 2020. China’s record-breaking growth is expected to continue in 2021, driven by an offshore wind installation rush to meet China’s Feed-in-Tariff deadline by the end of this year [2021].”

According to Alastair Dutton, chair of Global Offshore Wind Task Force at GWEC, offshore wind continues to cement its role as one of the most crucial technologies to decarbonize and achieve net-zero emissions. Current global offshore wind capacity has helped avoid 62.5 million tonnes of carbon emissions — equivalent to taking more than 20 million cars off the road.

“Yet, we are only seeing the tip of the iceberg when it comes to offshore wind’s massive potential,” Dutton adds. “The World Bank Group reports that there is more than 71,000 GW of offshore wind potential globally with current technology, and tapping into this resource will be key to keep global warming below 1.5°C pre-industrial levels, while generating significant economic benefits.”