Boasting a prepreg carbon fiber airframe, the HLAP concept became a platform for a variety of composite fabrication techniques.
#composites4_0

IYRS School of Technology and Trades (Newport, R.I., U.S.), a private nonprofit school focused on training highly skilled craftspeople and technicians for careers in a wide range of industries, reported on July 3 that a variety of composites-related technologies have been used to complete its Heavy Lift Aerial Platform (HLAP) concept model.

The ongoing composites technology project started in the school’s old Bristol facility in the fall of 2015 as a capstone project. Four years later, after migrating to the new Brooks building in Newport, multiple classes and groups of students have contributed to the start and stop progress of the demonstrator.

IYRS says the non-flying concept model is a 2 meter by 2 meter quadcopter designed with a lift capacity of 103 pounds of continuous load. It features eight electric motors with four sets of counter-rotating 24-inch propellers. The airframe consists of prepreg carbon fiber with a 3D printed thermoplastic sub-structure, and the mock-up motors are also 3D printed.

“The ducted fan design capitalizes on about 12% of additional thrust over an open prop configuration, reduces the noise level and will allow the vehicle to “park” up against the side of a building, in trees, or operate safely in proximity to maritime rigging,” says Bob Lacovara, project lead instructor. 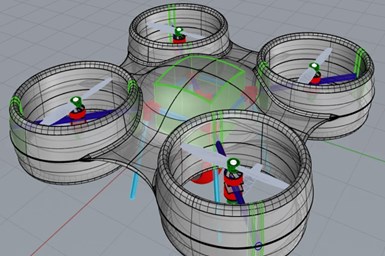 The purpose of the project, IYRS notes, was to create a platform for the incorporation of many different fabrication techniques and applications of materials. The fabrication includes the use of CAD programming and CNC machining, epoxy tool making, advanced composite prepreg molding, vacuum infusion, open molding and 3D printing, further serving as a laboratory for the integration of composites design, materials and processing methodology.

“In terms of the potential use of the Heavy Lift Aerial Platform,” Lacovara says, “The HLAP concept has a range of applications from commercial to military tasking. The vehicle’s design load capacity produces the potential for delivery of goods, use as an observation platform, for inspections, communications, search and rescue, or cinematography.” IYRS says the completion of the project marks the intersection of product design, materials application and processing techniques to produce it. The HLAP will be on display in the Brooks Building stairwell.

IYRS would like to thank Composites One (Arlington Heights, Ill., U.S.) and Axion (Huntsville, Ala., U.S.) for the donations of specialized materials used in the tooling and fabrication. Special thanks and acknowledgment would also like to be given toward the successive generations of students who contributed to the effort: