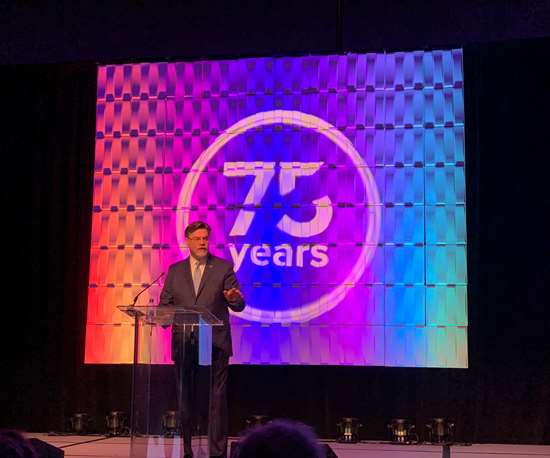 The SAMPE 2019 conference and exhibition, produced by the North America Society for the Advancement of Material and Process Engineering (SAMPE, Diamond Bar, Calif., U.S.) kicked off in Charlotte, N.C., U.S. with a keynote from Dr. Greg Hyslop, chief technology officer for the Boeing Co. (Chicago, Ill., U.S.). Hyslop briefly addressed the challenges Boeing is currently facing in the wake of the two fatal crashes and subsequent grounding of its 737 MAX aircraft. While Hyslop was unable to comment on the ongoing investigation, he assured the packed room that teams at Boeing are “working tirelessly” with the FAA to certify updated software that the company claims will correct the problem.

The keynote quickly shifted to a look at the future of advanced materials and highlighted the importance of collaboration and the willingness to share information and ideas.

The talk touched on some of Boeing’s programs starting with the 777X, which features the largest carbon fiber wing ever made. The aircraft will begin flight testing later this year. Once in service, the 777X will, said Hyslop, enable continuous flight between any two points on Earth. Hyslop touted the success of the composites-intensive 787 Dreamliner, which he says has saved more than 20 billion pounds of fuel since its introduction and is shaping the thinking of the company as it moves forward.

Boeing’s programs beyond commercial aircraft include the Echo Voyager autonomous submersible, the T-X Air Force trainer, the MQ-25 unmanned tanker (which will reportedly have its first flight at the end of the summer) and the XS-P Phantom Express reusable spaceplane, designed for the Defense Advanced Research Projects Agency (DARPA, Arlington County, Va., U.S.), which features a composite cryotank designed to reduce tank weight by 40 percent.

Hyslop discussed ways in which Boeing is working to address the growing problem of ground-based traffic and congestion, and an increasingly crowded airspace. He discussed the Boeing NeXt program, which is aimed at urban, regional and global mobility. In 2017 Boeing acquired Aurora Flight Sciences (Manassas, Va., U.S.), which has been working on an air taxi program. Meanwhile Boeing is partnering with Aerion (Reno, Nev., U.S.) on supersonic travel. He said that composites will play a big role in these programs and added that Boeing believes additive manufacturing holds great promise for space and aircraft. The company is also working on a SKYGRID future aircraft management system aimed at supporting future aerial infrastructure.

During a Q&A session after the talk, when asked about the future of aluminum use in fuselage structures, Hyslop admitted that aluminum still has a significant role to play in aircraft fuselages, but reiterated the significant role that composites play — and will continue to play. He described the company’s approach to materials as “holistic.”

When asked about the twin-aisle New Midsize Aircraft (NMA, or 797) that Boeing has been designing and evaluating over the last two years, Hyslop said he could not comment officially as the plane has not yet been formally launched. However, he subsequently stated that “you should attend the Paris Air Show” (June 17-23, Paris, France) for additional information. He also said that a dedicated factory and services are being developed for the NMA. “It will be a great airplane,” he said, adding that composites would play a key role.